Doctor Zhivago by Boris Pasternak (1890 - 1960) is an epic Russian novel that takes place during the socialist revolution of 1905 and the years up to World War II. Philosophical and beautifully written, it is sometimes difficult to follow as it has a cast of thousands and everyone is known by about three or four different names. Ah! Russian novels! 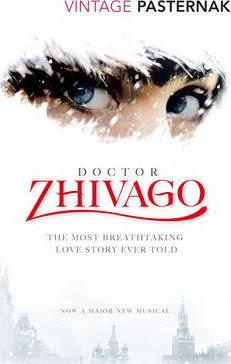 Doctor Zhivago was first published in the West in 1957 but was banned in the Soviet Union. Pasternak won the Nobel Prize in Literature in 1958 'For his important achievement both in contemporary lyrical poetry and in the field of the great Russian epic tradition.'

Pasternak initially accepted the award but after a brutal denunciation by the Soviet regime he reluctantly renounced it. It was either that or be banished from the country he loved. It wasn’t until 1988, twenty-eight years after his death, that the book was published in Russia for the first time. From what I’ve read about the author, the book is partly autobiographical.

Yuri Zhivago, the main character, is a physician and poet. Pasternak was born into an artistic family and had a classical education. He went on to study music and philosophy but gave them up to devote himself to poetry. Zhivago’s life reflected that of the author’s in his relationships with women also.

Zhivago was an intellectual and as such, an enemy of the people in the new Communist regime. In many ways he was a victim of the times: forcibly taken by the partisans to work in hospitals on the battlefields, he was removed without notice from his wife, Tonya, and young family, who could only guess at his whereabouts. Given an opportunity to escape his forced detention, he basically walked across Siberia to his old home but found his family had relocated.

Throughout the novel there are threads of long-term friendships and a vast network of relationships that intertwine and separate throughout. One of these relationships was in the person of Lara whom Yuri had met when he was a boy and later on as he was working in the hospital in town. He had just begun a relationship with her before he was taken by the partisans and they came together again after his escape. He was a complex, sensitive man but his actions at times demonstrated a lack of moral feeling. Although at times he pined for knowledge of his wife and children, he didn’t make any great effort to find them. Zhivago’s internal world reflected his external circumstances:

'Everything established, settled, everything to do with home and order and the common round, has crumbled to dust and been swept away in the general upheaval and reorganisation of the whole of society...'

The author must have been a brave man to try to publish a book like this in Soviet Russia. It is certainly not a glowing account of the rise of the Soviet state. Yuri was at first an admirer of the Communist cause but that admiration dissipated as the book progressed:

‘...he found that he had only exchanged the old oppression of the tsarist state for the new, much harsher yoke of the revolutionary super-state.’

‘Revolutions are made by fanatical men of action with one-track minds, men who are narrow-minded to the point of genius. They overturn the old order in a few hours or days … but for decades thereafter, for centuries, the spirit of narrowness which led to the upheaval is worshipped as holy.’

‘...it turns out that those who inspired the revolution aren’t at home in anything except change and turmoil: that’s their native element; they aren’t happy with anything that’s less than on a world scale.’

He was to ask himself later:

‘Was it possible that in one short moment of over-sensitive generosity he had allowed himself to been enslaved forever?’

Pasternak’s poetic ability shines through his writing so brilliantly that it was difficult to choose what to share here. He also digresses into much philosophical meandering but it is so well-written that I think it adds to the story. Some of these philosophical reflections reminded me of Tolstoy’s writing in Anna Karenina - actually, Tolstoy was a friend of Pasternak’s parents.

‘Marxism a science?...Marxism is not sufficiently master of itself to be a science. Science is more balanced. You talk about Marxism and objectivity. I don’t know of any teaching more self-centred and further from the facts than Marxism. Ordinarily, people are anxious to test their theories in practice, to learn from experience, but those who wield power are so anxious to establish the myth of their own infallibility that they turn their back on truth as squarely as they can. Politics mean nothing to me. I don’t like people who are indifferent to the truth.’

‘Men who are not free...always idealise their bondage.’

I loved this description:

‘Now the front is flooded with correspondents and journalists...linguistic graphomania and verbal incontinence.’

‘Everything had changed suddenly - the tone, the moral climate; you didn’t know what to think, who to listen to. As if all your life you had been led by the hand like a small child and suddenly you were on your own, you had to learn to walk by yourself. There was no one around, neither family nor people whose judgement you respected. At such a time you felt the need to entrust yourself to something absolute - life or truth or beauty - of being ruled by it now that man-made rules had been discarded.’

‘How intense can be the longing to escape from the emptiness and dullness of human verbosity, to take refuge in nature, apparently so inarticulate, or in the wordlessness of long, grinding labour, of sound sleep, of true music, or of a human understanding rendered speechless by emotion!’

‘There was something in common between events in the moral and the physical world, between disturbances near and far, on earth and in the sky.’

Pasternak was a master of simile and metaphor:

‘The gunfire had died away behind him. There, behind him was the east. There the sun had risen in a drift of mist and was peering dully through floating shadows, like a naked man through a cloud of steam at the baths.’

‘Grief had sharpened Yuri’s vision and quickened his perception a hundredfold. The very air surrounding him seemed unique. The evening breathed compassion like a friendly witness of all that had befallen him. As if there had never been such a dusk before and evening were falling now for the first time in order to console him in his loneliness and bereavement. As if the valley were not always girded by woods growing on the surrounding hills and facing away from the horizon, but the trees had only taken up their places now, rising out of the ground on purpose to offer their condolences.‘

An extract from Yuri’s diary in happier times with Tonya and her father who lived with them:

‘At the beginning, during the spring and summer, we had a very hard time. It was all we could do to struggle along. But now we can relax in the winter evenings...The women sew or knit, Alexander Alexandrovich or I read aloud...We read and re-read War and Peace, Eugene Onegin, and Pushkin’s other poems, and Russian translations of Stendhal’s Rouge et Noire, Dickens’s Take of Two Cities and Kleist’s short stories.’

At the end of Doctor Zhivago the Bezprizornaya, homeless children whose parents were killed in the civil war, are mentioned. There is an article here about this:

My copy of Doctor Zhivago pictured above was published by Vintage in 2002 and was translated from the Russian by Max Hayward and Manya Harari in 1958.

Linking to Back to the Classics 2020: 20th Century Classic

at August 24, 2020 12 comments:
Email ThisBlogThis!Share to TwitterShare to FacebookShare to Pinterest
Labels: 2020 Reading Challenges, 20th Century, 50 Classics in 5 Years, Back to the Classics 2020, Historical Fiction, Russian Novels, The Classics Club

These are some of our recent nature gleanings. On a visit to a local park this very tame rabbit was having breakfast and remained totally oblivious to us and we were able to have an unplanned nature study observing him/her feeding. 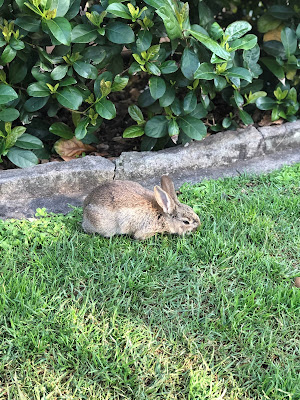 We've used Nature Studies in Australia by William Gillies this year for studying Natural History in Australia and finished it the other week so now I'm reading The Wilderness by Amy Mack (1922) aloud. It's only 26 pages in length but it fits in nicely with the course from U of N. A free online version is available here. 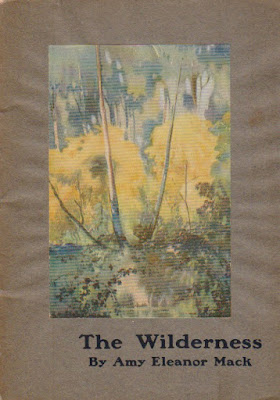 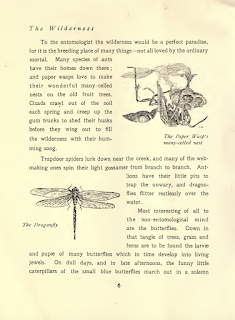 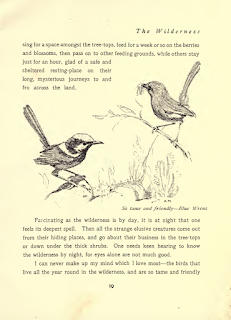 Last week we had a walk down near the creek after quite a bit of rain. We have a waterfall that gives a spectacular display after a good amount of rain and this was the first time that these two had seen it like this. My granddaughter (who's nearly 3 yrs old) pointed to it and called it a shower. 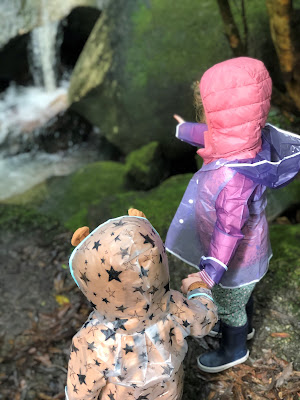 Here they are having a good splash in a puddle. My grandson (nearly 2 yrs of age) calls any body of water a puddle including the river we visited a couple of months ago. 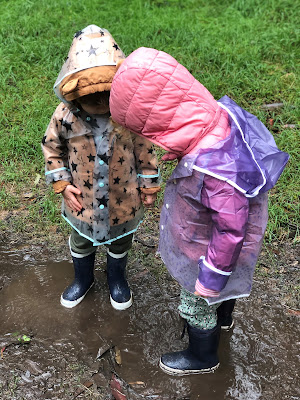 Miss 15 yrs and I signed up to do the free University of Newcastle's Natural History Illustration course. Hails had already done it about 2 years ago and wanted to do it again so I joined her this time.
This is my rendition of an echidna. We usually see about one a year around our area and I sketched this from a photo as they don't hang around for very long and start to burrow if they sense people are near. 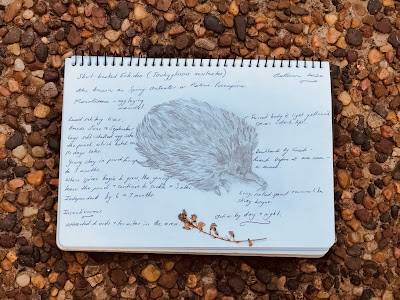 This was this week's lesson was about 'developing good observational skills and accurately recording every detail you see in front of you; looking at both positive & negative spaces, breaking down complex subjects into simplified shapes & depicting a three dimensional object on a two dimensional surface.'
This is my drawing from that: 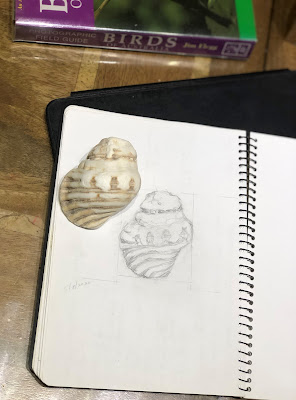 And this is Hails' drawing of a fox and the stages she went through in doing it - yes, she leaves me for dead, but she is very encouraging and likes me drawing (well, trying to) with her. 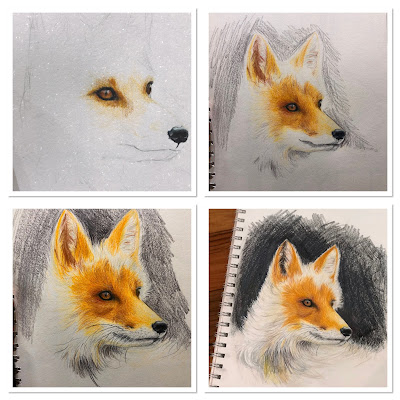 A wattle in bloom... a little earlier than usual 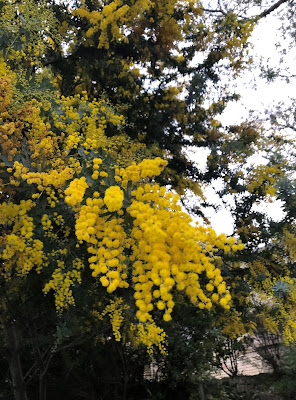 Some fungi after all the rain 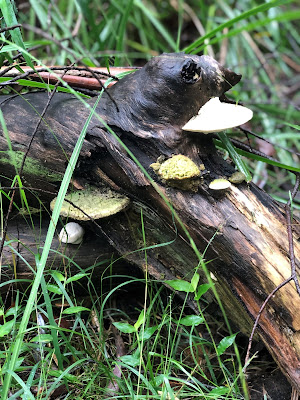 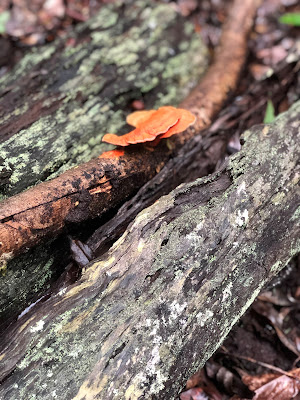 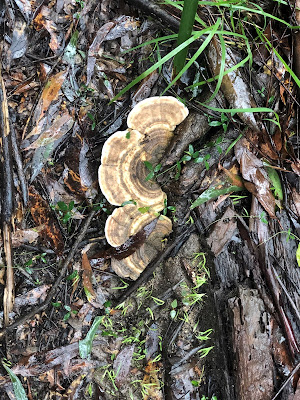 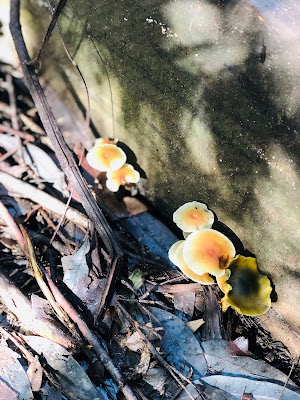 We've seen some new birds on our birdfeeder or on the camellia trees nearby but haven't been able to identify them yet. Our lyrebird makes an appearance from time to time and today we saw a black cockatoo in a tree just up the road. and we've had our yearly sighting of an echidna.