There must be so many untold stories of heroism from World War II. The movie Schindler's List, based on a book written in 1982, brought attention to the story of one man who was responsible for saving the lives of more than a thousand Jews during the Holocaust. More recently the story of the Bielski Brothers - Tuvia, Asael and Zus, has been uncovered and told in book and film. 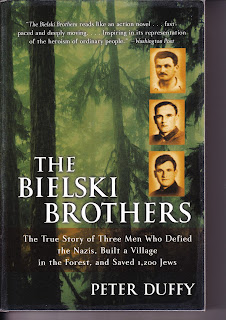 In June 1941 Hitler's armies invaded Russia in what was known as Operation Barbarossa, and quickly advanced to the city of Novogrudek in Western Belarus where they began to impose regulations to control the Jewish population and set up the Novogrudek ghetto.

The parents of the Bielski brothers and other family members were killed by the Nazis at this time and the three brothers being alerted by their young brother, acted quickly to find safe hiding places for their remaining relatives.
As the intentions of the Nazis became clear the brothers became increasingly worried about the safety of their relatives and they decided to move everyone into the puschas or dense forests of Belarus. Tuvia at the age of thirty-six years became the leader of the group:


'We cannot simply hide ourselves,' he said. 'We must do something for our people. We must send people to the ghetto to save Jews.'

Having grown up in a farming community the brothers were familiar with the surrounding forest and the skills needed to survive in such a place, and for two and a half years the brothers not only evaded the Nazis but waged a guerilla war against their enemies whilst caring for the very young and elderly members of their community. They established workshops and a school, and provided a 'Jerusalem in the woods' for other Jews fleeing from persecution.

In 1944 the Red Army overran the Germans forcing them to retreat back to Berlin. Within a few days of the news of the retreat more than one thousand Bielski Jews emerged triumphant from the forests. It was the largest World War II rescue of Jews by fellow Jews. The three brothers saved as many Jews in World War II as Oskar Schindler besides killing hundreds of enemy soldiers but they never received recognition or honour during their lifetime.

I'd never heard of the Bielski Brothers and was quite ignorant about Belarus. For those of us who grew up while the former USSR was in existence, countries such as this one were just part of a great big melting pot. I mean, did you ever hear of Kyrgystan, Uzbekistan or Turkmenistan before the 1990's?
I found out about the brothers by accident when BB brought home a DVD he'd found at the library. Defiance was the title and we watched it with our 18 year old who is doing some readings from AO Year 11 (20th Century) while he is doing an electrical course. 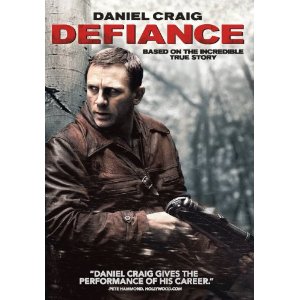 It's bleak, violent and contains coarse language - what you'd expect from a movie about war, but I thought it was done quite well. We didn't let our 16 year old watch it but I talked with him and our younger ones about the story and then I found a video online in which Ray Sears, an English woodsman, travels to the Belorussian forests and demonstrates the various bushcraft techniques the community used to survive during their time there. This would be suitable and of interest for about age 10 or 12 and up. It includes some historical clips and interviews with residents of the area and the connection of history with bushcraft (nature study) was inspiring and something I enjoyed sharing with my boys.
Update: a news article about the Bielski descendants and their view of the movie. http://www.nydailynews.com/entertainment/tv-movies/real-defiance-family-brooklyn-article-1.420286

Also see www.courageandcompassionexhibit.com (with thanks to the person who commented below)

'The brothers' daring deed never gave them in their lifetime the sort of recognition that today we regularly bestow on far lesser men. It pained Tuvia......that he was never honoured by the world beyond the group of forest survivors and their children. He was ideally suited to lead desperate people through the forests of Belarus, but he lacked a gift for self-promotion, for pithy sound bites or fluid prose.'  (Peter Duffy)

To all the unsung heroes out there - war veterans, people quietly living out their lives being gracious, kind, magnanimous, faithful, serving others; to those of old age who can only reflect on their little acts of everyday heroism performed in the past; to those being persecuted for their faith....I salute you!

Our family have also enjoyed the "Defiance" movie. It is inspiring to read about these unsung heroes!

The Florida Holocaust Museum in St. Petersburg, FL has a great exhibition about the Bielski brothers (though September). The exhibit was created with the help of survivors of the Bielski otriad and descendants and features artifacts from the time period. (www.courageandcompassionexhibit.com)

Thanks for the link. I didn't realise the escape tunnel from the ghetto was the longest one on record.

Carol, I appreciate your stopping by my blog to leave a note. I'm glad to know about your blog and I see we have many of the same interests (although my homeschooling years are in the past since my sons are grown). Thanks for highlighting this book & film, which I knew nothing about, but look forward to exploring.