Alas Babylon is a post-apocalyptic novel set in the fictional town of Fort Repose in Florida, USA.

The author worked in the war office at the time of WW2 under Franklin Roosevelt and was also a war correspondent in Europe. He later became concerned about the proliferation of nuclear weapons, the Russian/American arms race and the minefield of possible political & technological errors. The development and use of new weapons had brought WW2 to an end but in doing so had also ushered in a new threat.
Published in 1959 at the height of the Cold War, Alas, Babylon explores how survivors of a nuclear holocaust might survive and rebuild a civilised society. 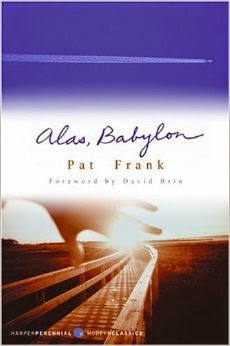 Last year I read On the Beach by Nevil Shute which also dealt with the after effects of a nuclear attack. Written two years before Alas, Babylon and set in Australia, it was well written but grim (ultimately everyone dies) so I was in no rush to read another story of nuclear catastrophe - but it was a title chosen by the book club I try to get to every couple of months and I have the opportunity to go this month, so I read it.

Very basically the story follows one man, Randy Bragg; his relationships, his response to the disaster and how he comes to a place of leadership in the community and begins to re-establish order and justice.

Thus the lights went out, and in that moment civilization in Fort Repose retreated a hundred years.


So ended The Day.

What it brought home to me was:

2) How insulated we are from the natural world
3) How crisis reveals character.

Unable to cope with the sudden change and the loss of his dominion, the bank manager shot himself.

'...well, let them try to go on without dollars. He would not accept such a world.'

Faith has the ability to rise up above our circumstances...

Many things had happened in the past few days and yet their conversation always came back to the Easter services. People hadn't been like that before The Day. He could not imagine any of them voluntarily getting up before dawn and then walking three miles on empty stomachs to watch the sun come up,
sing hymns, and listen to sermons however short...

Man absorbed strength from the touch of his neighbor's elbow...


Faith had not died under the bombs and missiles.

This was one of my favourite passages:

Alone of all the people in Fort Repose, Alice continued with her regular work...


Since The Day, the demand for her services had multiplied.


It was a surprise, and a delight, to see children devour books. Without ever knowing it, they were receiving an education. Alice would never admit it aloud, but for the first time in her thirty years as librarian of Fort Repose she felt fulfilled, even important.


All entertainment, all amusements, all escape, all information again centred in the library...There were not enough chairs to accommodate her readers. They sat on the front steps, in the windows, on the floor with backs against walls or stacks. They read everything, even the classics. And the children came to her, when they were free of their chores, and she guided them. And there was useful research to do. Randy and Doctor Gunn didn't know it, but as a result of her research they might eat better thereafter. It was strange...that it should require a holocaust to make her own life worth living.

Unlike On the Beach, (mentioned this briefly here) there is an element of hope in this story and the underlying theme is survival. Reading Alas, Babylon gave me an opportunity to look at the everyday things I take for granted: running water, electricity, security, music, communications, access to grocery stores, transport...the list goes on, and realise how much I have to be thankful for living in a civilised world.
The book is an easy read. It's not great literature but it is thought provoking.
Scheduled in Year 10 of the Sonlight Curriculum. It contains adult themes so I'd suggest a quick preview to see if it's suitable for your student.

The spores of kindness, as well as faith, survived in this acid soil.

at October 01, 2014
Email ThisBlogThis!Share to TwitterShare to FacebookShare to Pinterest
Labels: Books

I live the persistence of faith that you have showcased in the quotes; that faith an hope can survive difficult times is a wonderfully encouraging idea. Thanks!

I had no idea what this book was about. You've piqued my interest.

I really love this one. I want to reread it soon. Thanks for the review!