Adam Bede is an unusual book in many respects, which shouldn't be surprising, as George Eliot was an unusual woman.

*  George Eliot was the non de plume of Mary Ann Evans
*  Eliot was a fervent Evangelical up until her early twenties, when she rejected her Christian beliefs
*  Although she rejected her faith, she believed Christian ethics to be valuable
*  She is regarded as one of the greatest novelists of the nineteenth century
*  Adam Bede was first published in 1859, the same year as Darwin's Origins of the Species; Dickens, A Tale of Two Cities and Wilkie Collins' The Woman in White 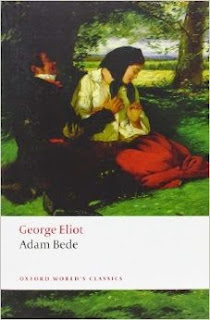 For a woman living in the Victorian Era, George Eliot had some radical ideas and she openly defied the social customs of that time. I expected this to colour her writing to a large extent, but instead, the strong Christian ethic which formed her younger years permeated the whole story. It is perplexing to read Adam Bede, with its strong Christian undertones and commendable Christian characters, knowing that the author did not share the beliefs of the characters she wrote about so sympathetically.
Invitation to the Classics, edited by Louise Cowan & Os Guinness sheds some light on this puzzle:

Eliot's fiction...employs Christian ethics - as a form of goodness without God - to create a model in which morality evolves through suffering, sympathy, and duty.


Eliot...believes in a radically nontraditional world that is evolutionary and unpredictable. She still relies, however, on such traditional values as kindness, sympathy, a fellowship of suffering, self-sacrifice, and duty as guides for living in that world.

I'm not going to say anything about the actual story - except that I loved it. For the first couple of chapters the colloquial language slows the story down as it takes a little getting used to, but before long it becomes an engrossing tale, peopled with believable and loveable characters.
I had a pencil in hand most of the time I read, underlining regularly. Eliot's skill with words is wonderful and her characters come alive beautifully. She also has a biting sense of humour, as her portrayal of Mrs Poyser, one of my favourite characters, highlights when she stands up to the conniving old Squire:

"Thee'st  done it now," said Mr Poyser, a little alarmed and uneasy, but not without some triumphant amusement at his wife's outbreak.


"Yes, I know I've done it," said Mrs Poyser; "but I've had my say out, and I shall be th' easier for 't all my life. There's no pleasure i' living, if you're to be corked up forever, and only dribble your mind out by the sly, like a leaky barrel. I shan't repent saying what I think, if I live to be as old as th' old Squire; and there's little likelihoods - for it seems as if them as aren't wanted here are th' only folks as aren't wanted I' the other world."


An interesting historical aspect of the book is its portrayal of early Methodism. One of Eliot's characters is a greatly respected young female preacher who plays a very important role in the story.
I think it was Virginia Wolfe that said George Eliot was for grown ups - not because the content of her books is unsuitable  - but perhaps because her probing into human behaviour, character and the role suffering plays in its development, may require some maturity to appreciate.

Our deeds determine us, as much as we determine our deeds; and until we know what has been or will be the peculiar combination of outward with inward facts, which constitutes a man's critical actions, it will be better not to think ourselves wise about his character.
When I told my 22 yr old daughter I was going to read George Eliot she mentioned she really didn't like Middlemarch when she read it (in her mid-teens, I think) but thinking of Wolfe's comment, and another similar comment I read by another author somewhere else, I suggested she try again. I also think Adam Bede would be a better book to start with than Middlemarch.

It was a still afternoon - the golden light was lingering languidly among the upper boughs, only glancing down here and there on the purple pathway and its edge of faintly-sprinkled moss: an afternoon in which destiny disguises her cold awful face behind a hazy radiant veil, encloses us in warm downy wings, and poisons us with violet-scented breath.

When death, the great Reconciler, has come, it is never our tenderness that we repent of, but our severity.

I have never heard of this classic. Very interesting.

I may just check it out.

Nice blog. Going to look around.

Stopping by from Carole's Books You Loved May Edition. I am in the list as #23 and #24.

My book entries are below.

Last Night At The Blue Angel

Ahhhhh..... YOU and Linda, and Karen KY are killing me!
I want to read Adam Bede, and Silas Mariner, and Sense and Sensibility... and a 100 other titles! sigh.

Good tip on this title instead of Middle March for my girlies, should they be interested later in life!

I'm fascinated reading Daddy Longlegs to them, and they happened not to be as thrilled with it as with Johnny Tremain, our family read aloud? (What happened to them?), they have not watched the movie, and it comes to me a bit in flash backs as I read, and they are true American girls who also LOVE history. Not in vain Tremain is a Newberry book!

But I have to tell you that my youngest (8yo) and I were re reading The Magic Pudding. It is seriously one of my favorite books. Simply perfect.

Well, King Solomon did say 'Of making many books there is no end' ...so then there's no end to reading them! My daughter prefers books with action at this stage & Johnny Tremain would be her preference too. We haven't read The Magic Pudding yet - shame on me, but we'll get to it one of these days. X

I think I started this after I finally finished Middlemarch, but put it down, not super interested. I will try again. I like Eliot, but not always at first. Silas Marner was great by the time I was done, and the same with Middlemarch. I also have Invitation to the Classics, but often forget to read it.

"Our deeds determine us, as much as we determine our deeds" So true.

I love "the golden light was lingering languidly" What beautiful phrasing. Lovely.