It's the 'official' school holidays here, not that we follow them, but we tend to end up changing our usual schedule because we don't have our regular weekly activities. Last week Moozle and I taught a group of ten children how to weave using a hula hoop as a loom in kid's holiday programme our church runs twice a year. Benj volunteered as one of the leaders and helped to run games & activities. At other times he's been rostered on First Aid as he has his Senior First Aid Certificate.

The ten children in our workshop were aged around 6 to 10 years of age; about equal numbers of boys and girls. None of them had ever done anything like this and had no idea what they were in for. One little boy wasn't impressed at first. The workshop he volunteered for was cancelled so he got put into ours. "I can't do this...this is boring!" Not a great start, but I kept telling him he'd actually enjoy it once he got the hang of it. The workshop was about an hour and a half long and Moozle & I had already put the warp on the looms (and spent a couple of days cutting up old t-shirts...) so we just had to teach them how to weave. About 10 minutes before the end of the class I told them we'd have to start looking at finishing the weaving and getting it off the looms. The kids didn't want to stop - including the reluctant boy! They kept saying, "Just one more colour..." so their weaving would be bigger. I took some photos once they got the hang of it and they were all thrilled with their finished work. 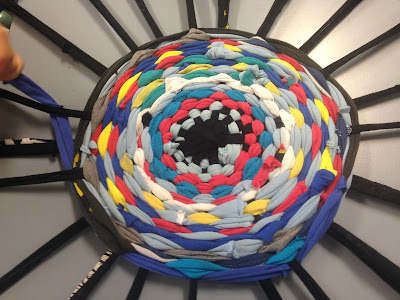 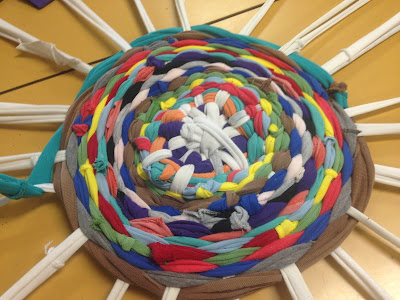 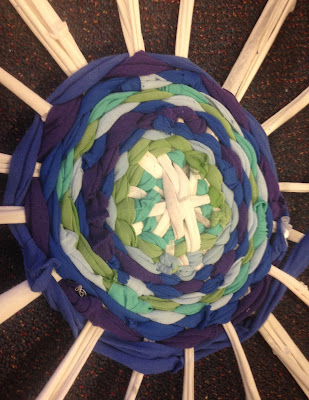 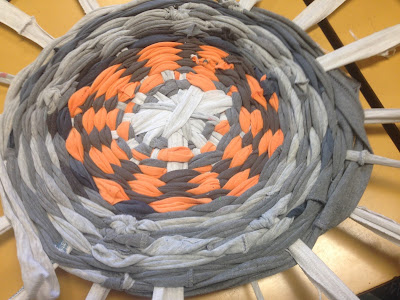 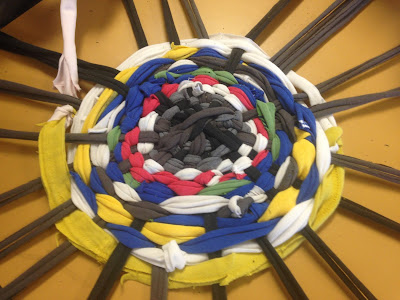 There are oodles of links on Pinterest and tutorials on youtube on how to weave on a hula hoop.
Update: a video link is here (they use a fancier sort of hula hoop in this one but we just had the normal cheap version) & here.

The Abolition of Man by C.S. Lewis - I wrote about this book here.
He's also continuing with The Root of the Righteous by A.W. Tozer which I finished recently.

The Westing Game by Ellen Raskin - this is a well-written mystery story that Moozle really enjoyed. A good puzzle with twists that keeps you guessing until the end. A Newbery Medal winner, 1979. 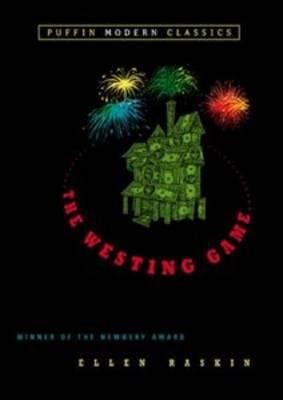 Stalin: Russia's Man of Steel by Albert Marrin. A good biography for ages 13 years and up. Some thoughts on it here.

A Decline in Prophets by Sulari Gentill - this is the second book in this murder series. I wrote about the first one here.
Set in Australia during the 1930's, this book picks up in pace from the first one, as I predicted, and launches almost immediately into the action. The very likeable main characters from the first book turn up again and find themselves caught up in a crime scene on board a cruise ship. Again, the author weaves crime and mystery with historical events and some notable people of the time and creates a very interesting and unusual story. A great way to learn about some not so well known parts of Australia's history. 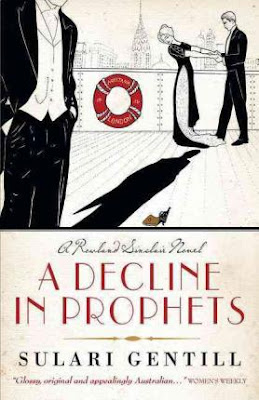 
I've been using Singapore Maths for a few years now with Moozle and while I think it's very good at showing the 'why' behind some of the maths, I don't think it's a thorough as some of the maths I've used with her older siblings. I was going through some books I'd packed away and found some unused "Key to..." workbooks so I started using them plus I'm going back to an A Beka text I used in the past as it covers things like clocks!! Most of the clocks at our place are digital and I was shocked recently when I realised that she had difficulty telling the time on a normal clock. She'll still do Singapore until we've finished the books I've already bought and then we may shift to Saxon for high school. 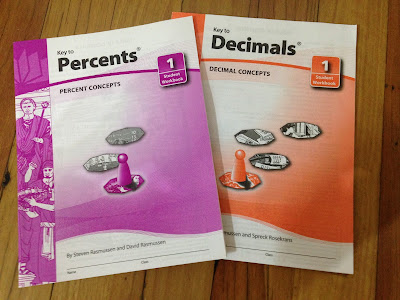 My husband and I have very different tastes in movies but we watched this together and both thought it was very good. Set at the time of the building of the Berlin Wall, it is based on real events and  raises some thoughtful questions regarding moral codes and law. See History vs Hollywood for more details. 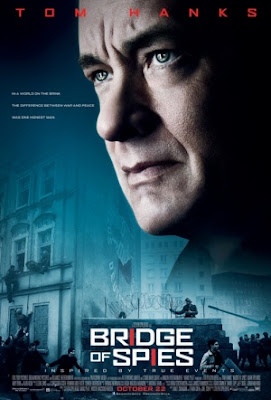 Math and writing is the most challenging subjects to teach in my homeschool. I find that many people hop around while teaching it to figure out what works. I found that overlapping different curriculum have worked for my kids just as you are doing.

Hi Nita! Yes, I've overlapped a bit with all my children, especially in the earlier years but this is my first child that hasn't been intuitive with maths so it came as a surprise to find she has some holes I need to fill in.

That weaving is impressive. I am not surprised that you won all the children over to it.

How fun, Carol! Your weaving is so neat! :D Thank you for the mystery recommendation, my dd will be so happy! And I put the movie on hold for date night. My dh and I have the OPPOSITE movie likes LOL and I know he will love this and I'm glad you enjoyed it too. :) Have you ever watched the Scarlett and the Black?

Btw, you had me at Fortnight ;) I love that word. Great blog title! :D

I've heard of that movie, Amy, but haven't seen it. Fortnight - apparently a shortened form of fourteen nights. I didn't realise it wasn't in common use in your part of the world but we use it regularly. A bit like your word 'fall'- we say autumn.

Do you have a link for the weaving? I'd like my art class to give it a try!

Hi Heather, I've added two links to the post above. Have fun!