We by Yevgeny Zamyatin - 'a study of the Machine, the genie that man has thoughtlessly let out of its bottle and cannot put back again.' 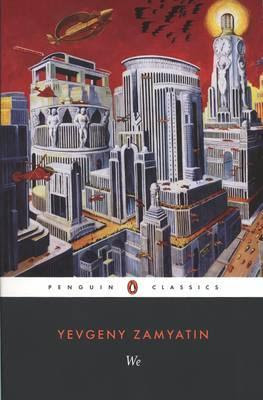 Dystopian or anti-Utopian literature is a genre that has always interested me. I can't really describe this type of reading as enjoyable but I'm attracted by the ideas and thoughts suggested by these types of books and the implications there might be for today's society.
We by Yevgeny Zamyatin was completed in 1920-21 before Stalin's rise to power so it was quite prophetic for the time but it also feels prophetic nearly a hundred years later with its themes of a technological and utilitarian world.
We is written in a first person narrative and is fragmented and oblique in places because of this. It wasn't until I was about three quarters of the way into the book that I really began to connect with the story and I think that was largely due to this intentional device the author used. It suited the overall theme of the story but it wasn't an easy read.

I'm not going to attempt to 'review' this book as I don't think I'd do it justice, but I'd like to focus on some of Zamyatin's ideas that stood out to me as relevant to our present culture.

A quick, very basic outline of the story:

It is the twenty-sixth century A.D. Many years ago, there was a two-hundred year war between the City and the Country and only a fraction of the world's population was left alive. Since the war, OneState, ruled by the Benefactor, and overseen by the Guardians, has vanquished Hunger and Love, the previous rulers of the world, and established a regimentation of mankind where everything is mathematically precise, each citizen functioning like a machine.

D-503 is the narrator of We. He is a mathematician and the builder of the INTEGRAL, a technologically advanced space ship that OneState is going to use to spawn the perfect society through the rest of the solar system.
Through D-503 we are introduced to the citizens of OneState (identified only by Numbers) and their collective society as he documents his thoughts in a diary. D-503 becomes infatuated by I-330, a leader of the Mephi, an underground group of revolutionaries. This messes with his rational, precise mind and he becomes sick. In fact, according to the doctor, he seems to be developing a soul:

"You're in bad shape. It looks like you're developing a soul."

We sometimes used expressions like "soul-mate," "body and soul," "soul-destroying," and so on, but soul...

The Mephi have plans to get control of the INTEGRAL. A revolution is brewing and D-503 is instrumental in allowing them to achieve their aim.

Some ideas expressed in the book:

A rigidly controlled society
Conformity - the victory of all over one, of the whole over the part
The individual personality is subjugated to the collective
The mathematical precision of life in a controlled environment
The regimentation of mankind

Scientific utopia
The Benefactor is all powerful, a god-like being who desires sacrifice
The State was above everything - loved ones, friends, the individual
The total surrender to Technology and Utilitarianism

The mechanism has no imagination.
When you were at work did you ever happen to see a distant, idiotic, dreamy smile spread across the physiognomy of a cylindrical pump? At night, during the hours designated for rest, did you ever happen to hear the cranes toss restlessly and heave sighs?
...But you are not to blame. You are sick. The name of your illness is:
IMAGINATION.

At the same time as I was reading this book, I'd started reading through Norms & Nobility: A Treatise on Education by David V. Hicks. He observes that:

'The ancients, unlike us, expected science to enhance the their understanding of the material world without particularly helping them to transform it. Their real interest was man, and wherever possible, they tried to turn Science away from matter to man...
Because the ancients regarded man as free...and not as determined by a material universe, there was little reason to turn science and mathematics into tools with which to mold nonliving matter and man's future...
But modern science...would change the world and, if we accept the dominant ideological creeds of the nineteenth century, it would change man...
A fundamentally political ideology dedicated to the reform or the anticipated progress of material conditions uprooted the ancient insistence upon a personal ideal.'

Hicks goes on to say that the modern world has rules of analysis that 'increasingly govern our understanding and appreciation of art, poetry, history, and even religion.'

It is not concerned with what ought to be done, but what can be done.

Taken to its extreme, the end result of this way of thinking is the starting point for D-503's world.


'There are books of the same chemical composition as dynamite. The difference lies only in the fact that one stick of dynamite explodes once, but one book explodes thousands of times.'
Yevgeny Zamyatin

George Orwell's review of We

Short biography of Zamyatin - interesting that he was a naval engineer and had a technical  background.

Silvia said…
Wow, Carol, what an interesting book.
I too like dystopian books because of the same reasons you state (the ideas and thoughts suggested in those books).
This review made me very curious about the book. Your connection with Norms and Nobility was very interesting too. Well done!
16 March 2017 at 09:53

Gently Mad said…
I have heard of this book but I am now going to put it on my TBR list. I am currently reading Ayn Rand's Atlas Shrugged which seems to read like a dystopian/SciFi novel. Thanks for a good review.
16 March 2017 at 10:00

Carol said…
Thanks, Silvia. It's fascinating to come across connections between completely different books. I noticed that David Hicks suggested (in Ch 9)'We' as part of a curriculum proposal for Year 11.
16 March 2017 at 13:13

Carol said…
I will be really interested in reading your thoughts on Ayn Rand, Sharon.
Re the date - this always messes with my head. It's bad enough trying to figure out if I put the clock forwards or backwards with daylight saving let alone thinking that in your part of the world it's the day before!
16 March 2017 at 13:17

I read it a few years ago and I found it extraordinary.

I like the way that you connected Hicks's work with this book.

We is full of interesting ideas that are worthy of discussion.

Thanks for linking Orwell's review. I have never read that but I will do so.

Ruthiella said…
I read We earlier this year and I liked your review much more than I liked the book! I did find it pretty oblique at times. Also, I felt that The Guardians didn’t seem really to be all that threatening. This is something that Orwell certainly improved upon in 1984.

Carol said…
Ha! It wasn't an easy book to condense. 1984 was so depressingly awful because much of what Orwell wrote is happening - big brother, newspeak etc. 'We' was more of a fantasy than 1984 & as you said less threatening - even the Benefactor seemed almost mild at one point. I wonder if Orwell would have written 1984 if he hadn't read 'We?'

Carole said…
Carol, this seems to be a more important book than the average dystopian - which is not really my thing. Cheers
5 April 2017 at 11:42

Carol said…
Hi carole, I think he raises some interesting ideas about succumbing to technology, some of which probably didn't apply back in the early 1900's.
5 April 2017 at 21:37

Joseph said…
I was not familiar with this story, though it is officially in my TBR, must have come to my attention somehow. I may have to move it up some. My choice by a Russian author: http://tinyurl.com/k4bcdf4
1 May 2017 at 03:27