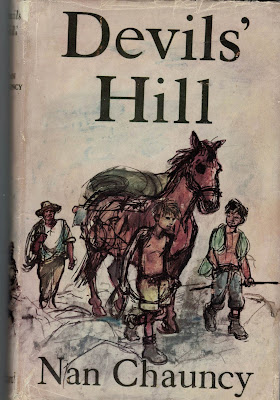 Devil's Hill by Nan Chauncy was published in 1958 by Oxford University Press and is a sequel to Tiger in the Bush but may be read as a stand alone book.
Eleven year old Badge Lorenny lives with his family in a secluded valley close to the Gordon River in Tasmania. The dreaded day comes when he has to leave his home to go to live at his Uncle's farm and attend school for the very first time. He doesn't like his cousin Sam who made him feel like a fool when they'd met a couple of times previously, and he doesn't want to leave the home he knows and loves.
Badge and his Dad head off through the dense Tasmanian forest and reach the banks of the Gordon to find it a raging torrent after recent storms. 'The Wire' his Dad built was still intact - a spider web of a structure dangling above the torrent below. They crossed over, sliding with their feet side ways on the lower wire while holding on to the upper wire with their hands. 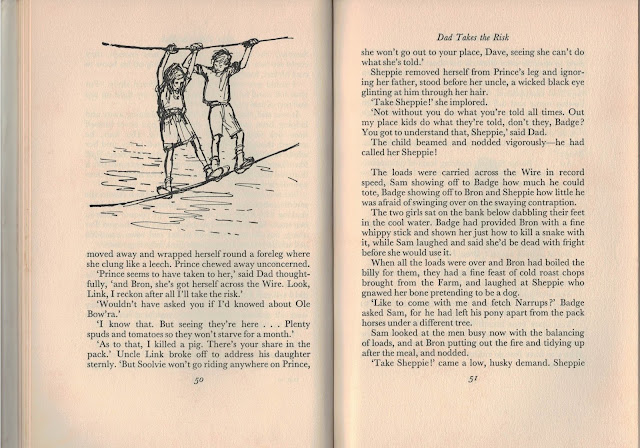 On the other side, Badge's Uncle Link was there to meet them with the news that school was closed due to an outbreak of whooping cough. Arrangements were made for Sam to come to stay with Badge and his family at the next full moon, but when the time came there were a couple of unexpected extras - Sam's two younger sisters Bron and Sheppie, had to tag along with him, much to his disgust, as their mother had been admitted to hospital and the girls couldn't be left at home on their own.
It seemed like Sam's visit was going to be a disappointing failure until the tracks of a missing calf were found and Dad decided to take everyone on an expedition to go in search of it.
Unexplored bushland, encounters with snakes, and finding a hidden cavern are part of their adventures but the expedition also proved to be an opportunity for Bron's starved soul to be filled and for the development of true friendship between Badge and Sam.


The nights were fine and clear, filled with still beauty and the occasional weird cry of owls wailing for 'More-pork! More-pork!' - and once the snarling cough of a Tasmanian devil hunting far away in the hills.
Each night after the evening meal Badge slipped outside to study the moon, for the Lorennys had no calendar with dates he could cross out with a pencil. The old moon lost shape like ice thawing in the bottom of of a bucket, and soon bedtime came before it rose at all.

Chauncy has written an engaging and lively story for children around the ages of eight or nine years and up. Badge took after his mother' 'Liddle-ma' in temperament and I liked the way Chauncy pictured their relationship. Ma understood her son's quiet and shy nature and loved him deeply without coddling him, whereas Sam's mother was overindulgent and was said to fuss over her son too much with the result was that he was sulky and spoilt when things didn't go his way.

All Nan Chauncy's children's books are set in Tasmania and reflect the love she had of the outdoor life, her knowledge of nature, and her own childhood spent in the bush. Her writing was innovative for the time and introduced a new realism - 'the adventure of everyday living and ordinary lives' -  into children's literature when many other authors were more idealistic and superficial. In Books in the Life of a Child, Maurice Saxby said that while other authors were describing 'travel-brochure' pictures of Australia, Nan Chauncy, 'began to write of the Tasmania that she knew intimately and about which she felt passionately.'
She wrote, 'not of the wide open spaces, or of cities, but of what she had experienced...and to this she gave imaginative life.'

'Nan Chauncy was one of the first of a wave of writers who were to give Australian children's literature a worldwide reputation for quality.'


Devil's Hill won the Children's Book of the Year Award in 1959.


More information on the author:

Except for this title published by Text Publishing, Nan Chauncy's books are, unfortunately, out of print. 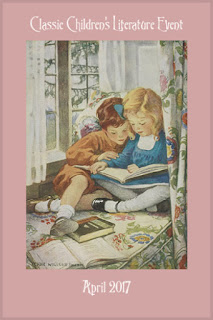 I think I would have loved this book as a kid. I was always interested in anything remotely exotic compared to my suburban childhood, whether that was life in New York City at the turn of the century or on the Kansas prairie in the mid 1800’s or in 1930s England. The idea of having to cross a river on a rope bridge...? Amazing!

Wow, this book sounds fabulous! The only Australian children's book I own is Red Sand Blue Sky, so I'm happy to be introduced to more of them!

Sounds beautiful! The type of things i dream of :)

The crossing was actually made of wire - I'd feel scared enough going over a torrential river on a proper bridge, let alone hanging on to a bit of wire :)

I've heard of Red Sand Blue Sky (an old Sonlight title ??) but haven't read it. It's a shame that so many titles are out of print - too many good Aussie titles that are being forgotten.

I forgot to mention that the author described horizontal forests. I lived in Tasmania for a few years and heard of them but never got to see them.

Sounds like a good book to recommend to my sister as her girls get older. I think it's great to read stories that are in (for us) exotic places. Thanks for the review!

Some of the first chapter booksI read to my children when they were little were the Little House series. We just don't get the winters you have & it was almost unimaginable for us to picture the conditions in stories like The Long Winter. 'There is no frigate like a book...'

Thank you for the recommendation! This on is going on my wish list. :)

Oh, this sounds like a fun book! I'd not heard of it before--it really seems like we must not get too many Australian books in the US. But it sounds like an excellent way to explore Tasmania.

You're welcome, Anne. There is some Aussie slang in the conversations so you might need the help of a translator :)

I was surprised to find some decently priced copies on Abebooks - cheaper for you than us when you take into account our lower dollar and then the postage.