We've just finished Week 9 of Plutarch's Life of Julius Caesar using Anne White's very helpful study guide. The study of Plutarch would never have been on my radar (as I explained here) but I was persuaded to have a try, at least, when I read how highly his writing was regarded by Charlotte Mason. '...perhaps nothing outside of the Bible has the educational value of Plutarch's Lives,' - that's what I'd call high praise!


In History, boys and girls of twelve to fourteen should have a fairly intimate knowledge of English history,...and of Greek and Roman history - the last,by way of biography; - perhaps nothing outside of the Bible has the educational value of Plutarch's Lives. The wasteful mistake often made in teaching English history is to carry children of; say, between nine and fourteen through several small compendiums...whereas their intelligence between those ages is equal to steady work on one considerable book.


More recently I questioned how well Plutarch's Lives was going to work with just my daughter and me as I've been used to having at least one teenager, sometimes three, joining in for the last six years. I think it is easier with more children in the mix, all taking turns narrating, but it has been going quite well this year with just the two of us.

Reading Plutarch isn't easy. I've always read it aloud and I've often thought to myself, "How can my kids understand this when I struggle with it myself?" But, funnily enough, although it's tough at times, Plutarch has been the originator of some great conversations and interesting written narrations. His vocabulary is so lush and expressive...'fardel.' I knew my daughter would use this word in her narration today - she latched onto the word as I read about Cleopatra being smuggled into Caesar's palace wrapped up in one. I had a good laugh reading over this today. 'It is past the hour of midnight, and I am still in my toga.'


Winter, the month of the two-headed god Janus, 48 B.C

In which much befalls me, and I meet the beautiful, divine, majestic, Cleopatra.

I, Julius Caesar, take my pen in hand to recount the day’s adventures.
I am sitting at my desk, writing this diary. It is past the hour of midnight, and I am still in my toga. Cleopatra is reclining in the room next to mine. Yesterday, I sent a message to her, asking her to meet me at the castle I am now in. She arrived this afternoon. The first notice I had of her arrival was a slave, who marched into my castle gatehouse, carrying a long, rolled up fardel. I stared at him, amazed. I asked him, “What, by Jupiter, is that?!”
The slave ignored me, and placed the fardel carefully on the ground, and started to slowly, and gently unfold it. Curious, I watched him silently. Suddenly, I gasped! The slave had finished unrolling his bundle, and out of it came Cleopatra, helped upright by her faithful slave! She advanced towards me, while I stood staring, my mouth hanging open. She took my arm, and we proceeded towards the banquet hall in severe silence. However, I soon recovered myself, and by the time we walked into supper, and we were talking without restraint, about her voyage, how surprised I had been, how I had not expected her to come like she did, and so on, and so on.
Suddenly, as we were sitting together, a slave came and whispered in my ear, a serious expression on his face. I hastily got up, excused myself, and left the room. I came back about twenty minutes later, with a nonchalant, I-have-done-nothing expression. Cleopatra looked at me suspiciously, then stared at my knife. I looked down at it, too, then hastened to explain.

After this rather disjointed explanation, I dashed from the room, and ran to the bathroom, to wash the blood off my blade. I must admit, I gave a rather false account to Cleopatra, but I did not want her worrying. The blood one my dagger was human, and it was one of two men who had been in a plot to kill me. I had therefore disposed of one of them. My faithful slave who had told me of the plot in the banqueting room, was naturally suspicious by nature, and had, by prowling around (when he probably should have been looking after affairs of my household) uncovered this plot and saved my life.
I went back to supper, avoided the gaze of Cleopatra for the rest of the night, and then went to bed with a sense of relief. I fear, though, that she probably guessed the truth from my dagger. That is all the events of the day. I will most certainly have an eventful day on the morrow, however, for I think that I will be engaged in a battle.

In which there is a battle, a fire, and I save some books from the library of Alexandria.

It was bitterly cold today. It is still cold, so I will make this entry as short as possible, so I may get to bed, sooner.
I have succeeded in my purpose to get Cleopatra’s throne back from her usurping brother. Also, we just had a baby boy, Ptolemy Caesar, or Caesarion. I was made dictator of Rome for the second time. I had a battle with king Pharnaces, and I won. I sent to Rome the words,
“Veni, Vidi, Vici. I came, I saw, I conquered.”
In the battle, my troops were routed at the start, and I was forced to swim to get away from the archers, and in the confusion, the great library of Alexandria was set on fire, but I managed to save some books, though they are rather worse for wear, having been on my head in the water while I was swimming away from the archers, so they are drenched, and have arrow holes!

Cleopatra Before Caesar by Jean-Léon Gérôme, 1866 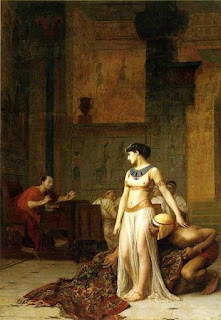 Interesting! I sometimes wish I could go back in time and read all the Greek and Roman literature…I’ve never even read Homer but I keep meaning to.

I did read Suetonius’ The Twelve Caesars last year, which I found interesting (I can’t remember what inspired me to pick it up, however!). I think the most fascinating take away from reading it was how modern it often seemed in its observations.

Thanks, Anne. It would have been diabolically hard without your guide!

That's what has fascinated me about some of these older works. There's nothing new under the sun, really, when you boil it all down. We stretch the Plutarch readings out over 12 weeks - usually do this for Shakespeare also & it makes it much more manageable.

That is a wonderful narration! I printed it for my children to read, hoping to inspire them...
Carol have you ever described 'a Day in the Life' of yourself and your daughter using Ambleside online? I would love to know what it looks like. Eg do you have her write a narration straight after a reading? Does she usually read the text herself or do you read things together? How many written narrations a day/ week? Also, how was it different when you had more than one doing AO?

Hi Catherine, I did one about 18 months ago: http://journey-and-destination.blogspot.com.au/2016/02/a-day-in-life-of-classical-homeschooler.html?m=1
I'll do another one with just Moozle & me sometime soon. She's a few weeks into Year 7 & our days look a bit different.
She's a good reader & gets through the books very quickly but there are a few I'm reading aloud, mostly so we can talk about them or because they have mature themes & I may have to edit in places. Written narrations - sometimes she'll write as soon as she's finished a book, sometimes it will be a bit later; occasionally she'll write something over a few days or a couple of weeks - she's doing this with Winston Churchill's Birth of Britain, adding to her narration each week after she's read the chapter. I count science notebook as a written narration & she usually writes something each day. She has a music exam coming up & that requires a lot of effort so with things like that I tend to drop something like a written narration to give her more time but I still get her to narrate orally. It's very different without all the others around during the day. I still basically have a similar time commitment but less intense & Im doing more outside activities now than I've ever done
Anyhow, I'll keep track of our week so I can post a day for you to see. Great questions!

Wonderful - thanks Carol! So appreciating your blog. Where have you been all my life? :)