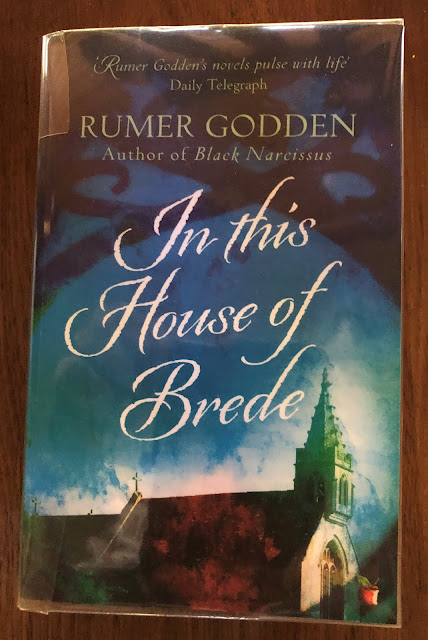 In This House of Brede is a quiet sort of book; reflective and introspective but lively and interesting at the same time.

Philippa Talbot is a successful career woman who joins an order of contemplative Benedictine nuns at the age of forty-two.
Self-possessed, capable, used to giving orders and making decisions, she enters her new life as a postulant with women half her age and finds that it is not a place where she can hide and shut herself off. In this closed community she embarks on a new beginning, comes face to face with the pain of her past, and discovers that others, too, have their frailties and struggles, from the Abbess to the novices.
Phillipa's initial struggles come from unexpected quarters:

'Thank God I shall never gave to give orders again...’ None of the things she had anticipated as being hard, were hard; not the cold, nor the long hours of prayer. It was the little things that were Philippa’s danger; things so little they made her ashamed...the habits of success were fast in Philippa; indulgences that had become habits. Other postulants and novices were not old enough to have them as embedded but for Philippa, in those first months at Brede, they were like hooks being torn out of her flesh.

The daily rubbing of different personalities draws out the little annoyances and personality quirks. One of the Benedictine vows was that of 'conversion of manners,' which involves 'an entirely different way of thinking from the world’s...self-effacement instead of self-aggrandizement: listening instead of talking...being willing to empty yourself...'

'If there is any instability, religious life will make it worse.'

The Benedictine postulants needed to know that there were no compensations to this chosen way of life. A young nun renounces love, marriage, and the gift of children, knowing that ‘the lack of these things will gnaw at her all her life, leave holes in her, yet she must be just as warm, as self-denying and hard working as any wife or mother, and just as loving, without anyone to hold to.’

Somehow most of them did it, as did Sister Cecily whose young man turned up at the Abbey to beg her to leave and marry him.
Oh my! That was difficult to read. I really thought she should leave, marry, and have kids, but maybe that just reflects what I would have done in those circumstances.

An order whose purpose it is to care for the sick or to engage in teaching is understandable to those on the outside, but Brede, being a contemplative order whose main work is prayer, is less inclined to be understood:

'Nowadays there’s a tendency to make everything utilitarian - even the things of the spirit,' said Dame Clare. ‘Beware of this,’ and ‘That wasn’t the way of the saints,’ said Dame Ursula. ‘They didn’t set out to be of use.'

Rumer Godden set her book in the mid 1950’s and mentions the death of Pope Pius XII. the election of his successor, Cardinal Roncalli (later Pope John XXIII) and subsequent changes in church structure. New recommendations for the nuns’ habit were adopted by some of the Abbeys, which was applauded by some but others said that it was casting away tradition.

There is a sense throughout the story of the anticipation of some major event or great drama about to occur but then it passes and life goes on. Not a great deal happens outside of the internal crises of the various characters in the 500 plus pages of this book, but Godden’s writing is compelling. I just wanted to keep reading and was surprised it was so hard to put down.

Philippa stays the course and learns that, ‘Nothing less than the whole is good enough for God.’

In This House of Brede is like a tapestry showing the complexities and flaws behind a work in progress, but it also displays the grace that brings about true transformation and growth that makes for something beautiful and whole. It is a great choice if you're looking for a literary book with a Lenten theme.

‘We have chosen a stillness more powerful than all activity.’


Linking to Christian Greats Challenge, No 7 Seasonal Book and Back to the Classics 2019: 20th Century Novel

This sounds like a fascinating narrative and intriguing character study. I am not a believer, but I find that accounts such as this to often be worthwhile. Based on your description I think that I understand why this was difficult to put down.

I read In This House of Brede last year and it quickly became one of my top ten, or even my top five. I was surprised by the end at how different it was from my expectations. Your review has very good insight.

My library actually has this one! Yay. :)

Your review has piqued my interest in this book because of the quote you included about overcoming habits . . . I have been pondering some of my own habits, and I'm curious now about Philippa's struggles with giving up her own.

Hi Brian, it is a fascinating character study & worth reading even just for that.

Hi Lucy, it was an unusual book with some interesting twists & turns. I was surprised by the direction it took quite a few times.

Lark, I'm always surprised by what you can get in your libraries compared to ours!

Anaise, I didn't mention this in my review but she really struggled with giving up smoking & alcohol, although the book focussed more on her inner life.

Fantastic review as usual Carol! I'd heard the title and author before but didn't know what it was about. So interesting that the public would not understand that the main "job" of a nun (or a monk I assume too) is contemplation and prayer. But it does make perfect sense when I think about it.

Thanks, Ruthiella. It’s not a measurable activity - sort of like including poetry & art in education - they’re not utilitarian so not seen as unnecessary. That might sound random but it’s something I’ve been thinking of lately. 🤨

I've got this on my list for this year -- your review is convincing me to move it up to my next read and hope that it ties into Lent for me. I don't think I counted it as a seasonal read in my picks, because I didn't realise that it was!

Godden has always scared me. I read one of her children's books once and it was so odd I wasn't sure I wanted to give her another go. But you're starting to convince me. Keep up the good work/reviews! ;-)

Nuns have always fascinated me. Years ago I spent weekends at a convent because I taught their students piano and it was more convenient to spend the night than travel back and forth.

There are some things about their life (at least as I perceive it) that I would not mind, at least for a while, as in a week retreat, but I definitely value my husband and son!

I can't remember why I picked this book up in the first place, and I was surprised to love it so much, a book about nuns. It was the first thing I read by Godden and I went on to read many more and never came back to Brede, but I treasure it as my introduction to one of my favorite writers. Thank you for a lovely review.

I might have read this years ago but I'm going to read it again now. Thanks

Hi Lacey, yes, it doesn't jump out at you as a 'seasonal' sort of book but it ties in so well with repentance & other aspects of Lent.

Hi Cleo, this book is 'different' in a sense but it doesn't come across as weird. You have me wondering which book you actually read that turned you off her??!!

Hi Sharon, we lived near a convent for a while & they always seemed mysterious places - partly due to the type of building, I suppose. I don't think I'd like to live in a community of all women!

Hi Erin, nice to hear from you! Why am I not surprised you've read this?

GretchenJoanna, it's always so good to hear from you. I'll have to check your blog to see if you have any reviews of her books.

Carole, thanks for taking the time to comment. I always enjoy your book link ups.