The Scent of Water by Elizabeth Goudge (1963) 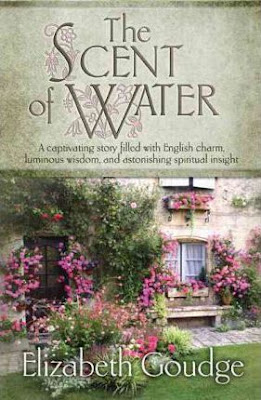 ‘At least there is hope for a tree:
If it is cut down, it will sprout again,
and its new shoots will not fail.
Its roots may grow old in the ground
and its stump die in the soil,
yet at the scent of water it will bud
and put forth shoots like a plant.’

The Book of Job


About 20 years after the end of World War II, Mary Lindsay, a single middle-aged woman living and working in London, received word that her older cousin, whom she had only met once, had died and Mary had inherited her home in the country.
Making a sudden decision to leave her prestigious job, her friends, and her future plans, Mary went to live in her new home. She had read Jane Austen’s books and decided that she would like to look at the few last fragments of Austen’s England before they disappeared forever - at least, that is the explanation she gave for her for her resolution, but deep down she knew there were other reasons.
Mary had led an interesting life and worked in the Admiralty during the war. It was there that she met her fiancée but he had been killed a week before they were to be married. With her trademark resilience, she poured herself into work with the Red Cross in Germany after the war.
Now, twenty years later she has made a life-changing decision that will help her to understand the past and gain insight into the lives of others that have touched her life in some way.

The Scent of Water is quite a lovely story with an unusual protagonist. Elizabeth Goudge really excelled in her characterisations and this book is peopled with some interesting and loveable characters. It’s so good to read a book and connect with the people in it. Her characters are always flawed people but she never leaves them without hope and one of the attractions of her writing is her gift of bringing these persons to a better place than they were at the beginning.

“People talk a lot of ballyhoo about suffering improving you. I should say that what it does is to underline what you were before...No, I can’t blame what I am on the war.”

“I deceived you and deception is stealing because it takes away the truth...”

The library catalogue of this book classifies it under ‘Domestic Fiction,' amongst other categories  (e.g. ‘Retired teachers,’ ‘Country Life’ and ‘Self-actualisation’ ), a description I haven't seen before but I like it. It could be interpreted as dull or prosaic, but in Goudge’s hands it is charming and filled with wisdom and insight.
The author weaves a domestic story that introduces the reader to a whole village and its doings. She delves beneath the surface and gets to the heart of things, revealing heartbreak, disappointments and difficulties but always with the purpose of redemption.

‘If anyone had asked her what she meant by integrity she would not have been able to tell them but age had seen it once like a picture in her mind, a root going down into the earth and drinking deeply there. No one was really alive without that root.’

Mary’s cousin kept diaries over the years and in them she reveals her struggle with mental illness but also her belief that she was meant to ‘build something up for somebody, make something to put into the hands of another’ when she died. That ‘other’ was her young cousin, Mary, whose father had brought her with him to visit her many years earlier.

The quote at the beginning of this post is from the Book of Job in the Old Testament of the Bible. It highlights a theme that runs through the story and involves the various characters.
I did think that the story felt a little unfinished. There were some loose ends and I would have liked to have seen some of the situations more fully resolved but it was very endearing, nevertheless.

Linking to 2020 Back to the Classics: Classic with Nature in the Title
at April 19, 2020
Email ThisBlogThis!Share to TwitterShare to FacebookShare to Pinterest
Labels: 2020 Reading Challenges, Back to the Classics 2020, Christian Classics, Domesticity, Elizabeth Goudge, fiction, Literature, Mother Culture

Hi Carol, I've heard a lot of praise for Elizabeth Goudge's work, and The Scent of Water specifically. It's also refreshing to stumble across stories with middle-aged protagonists, so this one sounds like a good choice for the tbr list. You make it sound like a good, contemplative read. I love the cover of your edition too.

The book sounds well worth the read. I think that books of this sort, be they be called domestic fiction or something else, allow authors to explore character without other things getting in way. As I get older I am appreciating this kind of book more and more.

I have not read anything by this author, although her personal life sounds as interesting as her fiction. I used to live in Bath and I would walk around and past a couple of Jane Austin's residences.

In the U.S. I would like to go on a pilgrimage to all of Laura Ingalls Wilders houses throughout the west and midwest.

Hope you all are doing well. Stay safe!

This does sound good! I will make it my next Goudge book. I really liked The Rosemary Tree but felt somewhat let down by Green Dolphin Street. I think I should stick to her more contemporary novels.

Hi Paula, it is a contemplative read but it also moves fairly quickly for a book like that.

Brian, I'm finding that, too.

Lark, I'd recommend this one.:)

Hi Sharon, I'd like to visit Laura's homes, too as well as Green Gables on Prince Edward Island!

Ruthiella, I enjoyed both those books but The Scent of Water & The Dean's Watch were my favourites. A friend keeps telling me I should read Gentian Hill. I have it but I don't want to read the same author in a run. i'll save it for a later time.

Sounds lovely, thanks for the review. I always enjoy Elizabeth Goudge. I think it was about a year ago that I read Green Dolphin Country, at your recommendation, and I really loved it! Over the winter I read Child of the Sea, which is a historical novel centered on the first wife of Charles II. It was a very charming story at the first, but got rather dark and depressing towards the end, so I don't know that I would recommend it. Still though, Goudge's books always pull me in - I love her style - and I'm always willing to try a new one. :)

Hi Laura Jeanne, glad you enjoyed Green Dolphin Country. The Scent of Water seems to be a book that most people love. Some of her books are certainly better than others but I find even if the story doesn’t flow as well as it could, she just has a delightful way of saying & describing things.

I just reread this. I find her books comforting but not sentimental (though they are often accused of that). I agree that this one has some loose ends that could be tied up better. But I suppose life is like that.

Hi Lori, I was initially put off reading her books as I suspected them of being gushy/sentimental, but she’s not like that at all. Life is like that, true 🙂 I’m just being idealistic.

I have this book on my Classics Club list and I am looking forward to reading it, especially after your review! I have been wanting to read an Elizabeth Goudge novel and this one and Pilgrim's Inn have been gushed over the most.

This one is my favourite of the two. I’ve only recently started reading Goudge’s books and are as rare as hen’s teeth here.