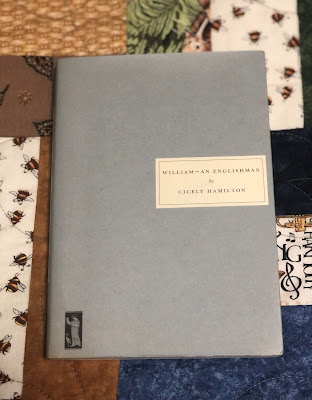 This book is a gem!

Cicely Hamilton worked in administration in France during World War I and served at the Front as the Germans were advancing and the area was being bombed. Incredibly, she wrote this novel during that time, probably in a tent, and in between evacuations and mopping up efforts. The book was first published in 1919 and reprinted by Persephone Books in 1999.

I don’t want to give too much detail about the storyline except to say that its ending is very different from its beginning.

William- An Englishman tells the story of William Tully, a very nondescript young man of twenty-three living under the strict rule of his mother. According to his office colleagues William was ‘a negligible quantity’ and he remained so until a crisis occurred in his life and changed the direction of his life.

William’s crisis led him to unburden himself to one of his work associates, a young man by the name of Faraday, who tended to keep to himself. Unbeknown to William, Faraday was a passionate Socialist and before long William, hitherto clueless about social issues, wholeheartedly embraced the same cause and devoted himself to it. Within a year he was in demand as a speaker and campaigner. He also became involved in the suffragette movement and it was in one of their meetings that he found his perfect match in Griselda. Like William, Griselda ‘had found peace of mind and perennial interest in the hearty  denunciation of those who did not agree with her.’

William and Griselda held to identical idealistic creeds. They were Pacifists when it suited them but knew next to nothing of history, science, literature or art.

They believed in, ‘a large, vague and beautifully undefined identity, called by William the People, and by Griselda, Woman; who in the time to come was to accomplish much beautiful and undefined Good; and in whose service they were prepared meanwhile to suffer any amount of obloquy and talk any amount of nonsense.’

William and Griselda believed their own intentions were pure and therefore the intentions of those who did not agree with them must be evil and impure. No dissent was permitted. The author played on this belief and the pernicious idea of isolating ourselves from those who hold opposing views. (There is nothing new under the sun, it seems.)

‘They were, in short, very honest and devout sectarians - cocksure, contemptuous, intolerant, self-sacrificing after the manner of their kind.’

William and Griselda were married and travelled to the Belgian Ardennes for their honeymoon where a fellow revolutionary had made her cottage in the forest available to them. There, in a foreign country, where neither of them knew the language and had no knowledge of or interest in world affairs, their narrow and idealistic thinking was shattered. For, the day before they had planned to return home to England, World War I was declared and the young couple were oblivious that the world had changed overnight.

Cicely Hamilton wrote with a brilliant combination of irony, sarcasm and humour about those on the sidelines of the war effort. William, Griselda and their associates were combatants in their own War; waging battle in scuffles at Cabinet meetings, suffragette protests, stirring up revolt and distributing pamphlets. Caught up in their own view of international affairs, armchair critics of everything military, they were completely unprepared for what awaited them.

I mentioned earlier that the book’s ending is very different from its beginning. As the story progresses there is a gathering intensity. The author keeps the sardonic tone but as their slightly ridiculous behaviour becomes pathetic rather than laughable, I felt a growing sympathy for the two of them.

‘So they trotted down the valley, humiliated, dishevelled, indignant, but still incredulous - while their world crumbled about them and Europe thundered and bled.’

‘...it is one thing to brave ridicule with an approving audience in the background, another to face it unapplauded, uncrowned with the halo of the martyr...’

I’ll leave my thoughts at that. I think William - An Englishman is a neglected classic that deserves to be noticed. I’ll be adding it to my daughter’s free reading for this year’s study of the 20th Century as I appreciate the way the author looked at the folly of dogmatically cutting oneself off from the views of others. The book is unusual in that it views World War I through the eyes of noncombatants. Another book I enjoyed in this vein was ‘Pied Piper’ by Nevil Shute, set in World War II.

This really does sound like it is worth the read. Neglected is a good word as I do not think that I ever heard of this before.

The conditions that it was written under as you describe them seem extraordinary. Imagine continuing the writing process under those conditions.

This sounds very interesting. Even though I have lived in Belgium and most of my life not very far from it, I have read very few Belgian books. Must put this on my wishlist.

Thanks for the review.

a powerful post... pointing out the necessity of being educated if one is to avoid traps of all sorts. unfortunately it also implies being depressed at the idiocy of society en masse...

Brian, I have enough trouble writing under normal circumstances. I don't know how she managed with the pressure she would have been under.

Hi Marianne, another person doing this challenge commented on the difficulty of finding a book set in Belgium. You'd probably be able to recommend a few!

Thanks for the review. I'd never heard of this one, but want to track down a copy. WW1 literature is fascinating, and this one sounds as if the author, Cicely Hamilton, was so close to her subject in place and time.

Hi Paula, I'd been wanting to read this book for awhile and was hoping it would be good. I wasn't disappointed. I managed to find a 2nd hand copy which is unusual for a Persephone book. They don't seem to be common finds here.

Hi Carol I am so glad you have reviewed this book I have considered getting hold of it a few times., and your review has ensured that I will🙂

Hi Margaret, if you're down this way anytime you're most welcome to borrow my copy.