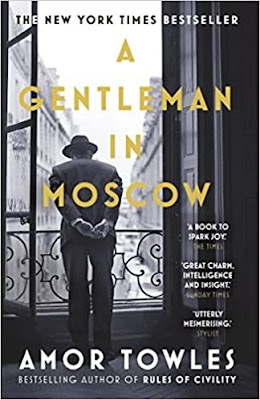 It was 1922 in Moscow and Count Alexander Ilyich Rostov stood before the Emergency Committee of the People’s Commissariat for Internal Affairs. After a self-imposed exile from his homeland, Rostov had returned to Russia. He was in his early thirties and was accused of returning to the Motherland in order to take up arms against the Revolution.

Due to his reputation as a hero in pre-revolutionary days, he escaped the death penalty and was sentenced instead to house arrest in the Metropol Hotel where he had been living for four years.

If he ever stepped out of the Metropol he would be shot.

The Metropol was built in 1905 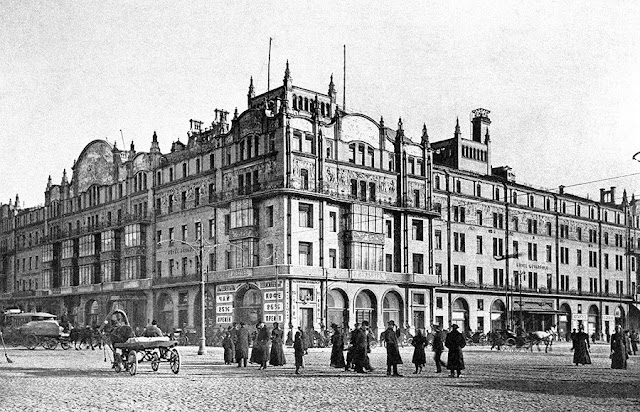 He was assigned to an attic instead of his elegant suite and denied his usual luxuries. His world had shrunk considerably.

But the Metropol was the world in miniature and in this world Rostov began to establish relationships and close bonds with a swathe of people. He learned that small things were important. As his physical life contracted into a tiny sphere, he had time and opportunity to make his soul. The relationships he cultivated grew him as a person and the lives he touched had far reaching implications in later years.

His has been a life of privilege and convenience but his reduced circumstances enlarged his life in ways that his prosperity and freedom never had.

"I’ll tell you what is convenient," he said after a moment. "To sleep until noon and have someone bring you your breakfast on a tray. To cancel an appointment at the very last minute. To keep a carriage waiting at the door of one party, so that on a moment’s notice it can whisk you away to another. To sidestep marriage in your youth and put off having children altogether. These are the greatest of conveniences, Anushka - and at one time, I had them all. But in the end, it has been the inconveniences that have mattered to me most."

I’ve always had an interest in reading about Russia during the heyday of Communist rule, but A Gentleman in Moscow takes a different route from my usual sorties into this time period. During his confinement within the Metropol, Rostov was shielded from much of the chaos and change that was happening on the outside, learning of it secondhand and intermittently, but the changes in Russia were reflected in the interior life of the hotel. It’s a unique way to view history to show the ripple effect that change and upheaval have on a society.

"By the smallest of one's actions one can restore some sense of order to the world."

The kindness and friendship he had shown to people such as waiters, bellboys, the hotel barber, a  seamstress, and a precocious young girl, would be returned in ways he would not have imagined.

"Who would have imagined, when you were sentenced to life in the Metropol all those years ago, that you had just become the luckiest man in all of Russia."

The author sprinkles the story with many literary comments and references, which I enjoy in a book, but sometimes it felt like a display of knowledge for its own sake, which might be a harsh observation...

An interesting and engaging story with a nice bit of adventure later on. I wasn’t sure about the very end, though. If you have read it, did you wonder what his plans were and if he was going to get away with them??

mudpuddle said…
rather a dead ending, then? this book has been around for a while and is generally admired, from what i've read... as large as the building is (tx for the pic) one could get a substantial amount of exercise just walking around talking to people; it must have been, as you indicated, a limited and ideal existence.
7 March 2021 at 10:55

Carol said…
I wouldn't say a dead ending. It's just me being pedantic, I think. It's just that I thought it had ended and then there was this little postscript that made me wonder. It works but it also leaves someone like me going through several scenarios...
7 March 2021 at 17:40

Brian Joseph said…
I have heard very good thongs about this book. It was such a fascinating time in history. Rostov seems like an interesting character.

Brona said…
It's funny. On my post from 2018 I wanted to talk about the ending to other bloggers and asked them to use 'spoiler alert' in the comments if they wanted to. But nobody did...and now I can't remember why I wanted to talk about the ending!
Nearly 3 years later, the main thing I remember is how much a enjoyed it. Any of the flaws or disappointments during the reading process have been forgotten and I'm just left with a lovely warm glow every time I think about the book :-)
8 March 2021 at 19:46

Carol said…
I'd heard good things about it, too, Brian. A friend gave it to me for Christmas - great, as I tend not to buy recently published books. It was generally very well written.
10 March 2021 at 19:52

Ruthiella said…
I've read the author's debut novel The Rules of Civility and thought it was just OK, so I wasn't in a rush to read this second book, despite all the positive reviews in the blogsphere and on Goodreads. I do like open-ended books though, often. I like making my own mind up.
15 March 2021 at 16:02

Katie said…
Great review! I loved this book and really enjoyed the world within a world that is the Metropol Hotel.
I agree with you about the very end though, it wasn't what I was expecting and I'm not sure what he plans to do next...
17 March 2021 at 22:17

Sharon Wilfong said…
I've wondered whether I should try this book because I love reading about Russian history. It sounds interesting.
22 March 2021 at 13:16