Perhaps no knowledge is more delightful than such an intimacy with the earth's surface, region by region, as should enable the map of any region to unfold a panorama of delight, disclosing not only mountains, rivers, frontiers, the great features we know as 'Geography,' but associations, occupations, some parts of the past and much of the present, of every part of this beautiful earth.

I love Charlotte Mason's view of teaching Geography and the quote above from Volume 6 of her wonderful book, A Philosophy of Education.
My memories of high school geography are very vague, probably due to the fact that I didn't turn up to the lessons most of the time. I didn't find anything about the subject remotely interesting and from what I observed my teacher seemed to feel the same way.
I couldn't wait to be old enough to leave school, travel and learn what I thought was real geography. I have travelled a fair bit overseas since then and have lived in most states in Australia but I've also learnt how to choose good books that make geography come alive. Books that have given my children and me the opportunity to travel with their minds to places they might never have the opportunity of visiting, to get a glimpse into a completely different culture through the eyes of someone who has their own unique perspective coursing through their veins; books that open up a panorama of places and cultures that are now no more.

I love the idea of 'associations.' A couple of years ago two newly arrived Iranian sisters walked into our church's free English classes and with their faltering English we heard about their culture seen through their nominal Muslim eyes: young girls growing up under a culture that was not originally theirs, imposed from the outside.
This encounter with these two young women opened my heart to learn about their homeland.
Fast forward a year: our family had the privilege of hearing Dr. Daniel Shayesteh speak and we were so impressed and touched by his story which he wrote about in his book, The House I Left Behind. 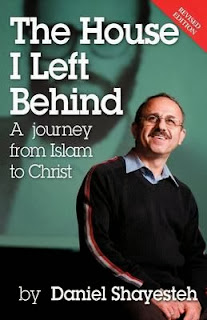 The House I left Behind gives a unique insight into the life of a practicing Muslim through the lens of a man raised in an Iranian (Persian) culture dominated by fundamentalist Islam (historically Iran has not always been Muslim and defended its Persian heritage for many years despite Arabic invasions).
It's the story of a man who desired democracy and economic justice for his country and believed the Iranian Revolution which deposed the Shah of Iran and opened the door for the rule of the Ayatollah Khomeini in 1979 would be the means of accomplishing this.

Was it ever stated that the purpose of the Revolution was a religious one and one that would empower the Ayatollah Khomeini with authority to apply Shari'a law in Iran? Never. The intention was supposedly a socio-political revolution that would ensure the equal and just distribution of wealth among Iranians by the vote of the people. Why would a righteous Islamic leader change his mind and betray his nation? He did it obviously to gratify his lust for power even at the cost of his fellow Muslims and countrymen, aligning himself with the political philosophy of Islam. Khomeini's manipulations were so subtle and clever that it never occurred to the people that he was deceiving them and the enforcement of Shari'a established his absolute supremacy over every individual and power in Iran.

The book looks at Persian culture and it's origins - the reigns of the great kings of old, Cyrus and Darius, the Indo-European roots of their language, their love of music and poetry and their customs and then tells the author's story:

Daniel Shayesteh was born on the Western side of the Caspian Sea in Northern Iran, which was formerly the kingdom of Persia, in the village of Talesh, in 1954. While studying in Tehran he became involved while a student in the Iranian Revolution and later in politics and saw the ousting of the Shah of Iran and the rise of the Ayatollah Khomeini.

We never knew the mullahs would start with pro-democratic attitudes but demand absolute allegiance in the name of Islam later. We just did not see it coming. We did not know that they would hate Iranian culture and would enforce ancient Saudi Arabian culture to dominate the lives of Iranians.

Daniel's hopes for justice and social, political and economic reform in his homeland were dashed and both he and his fellow students and revolutionaries were betrayed by the false promises of Khomeini and the mullahs.

The Islamic Republic of Iran has built many doors between Iranian parents and their children. The doors get closed to all if just one member of a family opposes government. For this reason, millions of doors are closed now between the children of Iran and their parents. The Islamic government has left a lot of parents mourning for their lost and fugitive children.

Falling out of favour with Khomeini's political group, he was kidnapped and sentenced to death but after a miraculous release he went into hiding and escaped to Turkey. It was here, after being betrayed by his business partner that he went to a group of Christians for help in trying to recover his money, and came to know Jesus Christ. Eventually his wife and their three daughters were able to join him in Turkey but eventually they even had to escape from there after threats on their lives.

This is a heart felt book written by a man who loves his heritage and his homeland and who still grieves for the relationships he had to sever when he left Iran. It is the best book I've ever read on Islamic culture. My grandfather (my mother's stepfather) was a nominal Muslim originally from Pakistan. I had that association when I was a child so I thought I had some insight into the Muslim worldview but Daniel Shayesteh's book opened up a whole new dimension for me, as well as presenting a diverse panorama of Persian culture.

I read this book aloud and even my 7 year old at the time kept asking for more. I did do some minor editing for her sake as some of the incidents he documents weren't suitable for her.
It was hard to choose what to quote from his book  - there was so much that was worth sharing but also if read in isolation his words may sound harsh. I was fortunate to hear him speak before I read his book and I found him to be very gentle, forgiving and very family minded. His story made me weep when I heard it from his own lips.

Is there any democratic Islamic country in the world which has developed an egalitarian  system and tolerated human rights, freedom of speech and religion? If yes, why has every Islamic country, even the most moderate one among them, made the proselytising of Muslims illegal? Why can Muslims build their mosques and schools in Islamic countries, but non-Muslims are not allowed to have similar rights in Islamic countries?

James A. Garfield once said that the two eyes of History are Geography and Chronology. Daniel Shayesteh's book presents a story that looks with both eyes and unfolds a sweeping narrative of a little known culture and a mostly misunderstood worldview.

Carol can you read my blog? someone said all they see is Black .I can see it through Chrome ,and IE.

me to ... hmmm. OOp making a new blog template LOL. I have become addicted to them, want to see it?