Sun on the Stubble by Colin Thiele 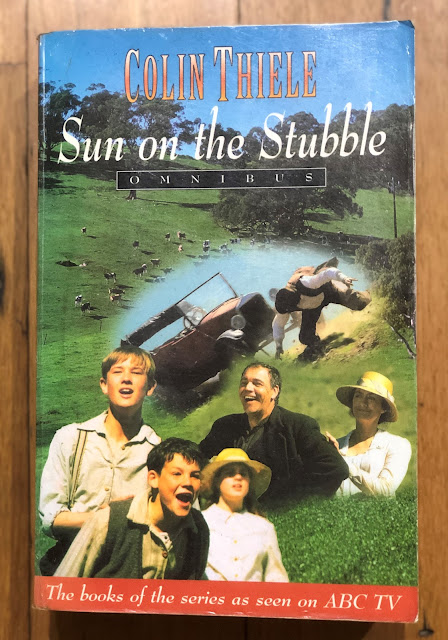 Sun on the Stubble is an Australian classic first published in 1961 and later adapted for television and was written by a prolific Australian author, Colin Thiele (1920-2006). We've read a number of his books, mainly for the younger set, and I'd heard of this book but didn't get to read it until my eldest was in her teens. I recognised the title when I stumbled upon it at an op shop,and thought I should at least give it a try seeing it was a sort of iconic Aussie book. I was surprised to find that it was so different from his other books, some of which are quite sad, and by the fifth page I started laughing at regular intervals and continued to do so until the end of the book 183 pages later.

I knew I'd just have to read this book aloud, which I did, but with great difficulty. When I'd finished the kids told their dad he had to read it aloud to them also. So he did but he had trouble too and everyone got frustrated because he'd read ahead and start laughing.

Bruno Gunther is the main character in the story, the youngest child of German immigrants, along with three other sons, two daughters, and Grandad, who settled in a farming community in South Australia after fleeing Germany.
The book opens as Bruno is leaving his beloved home to attend school in the city and his thoughts are on all he is leaving behind.

It was the end of a boyhood. The beginning of an exile. After twelve years in the warmth of home he was being thrust out, torn up by the roots, sent off to school in Adelaide. In his anguish the scenes of his boyhood swept through his mind's eye, leapt and swayed and flickered like the changing patterns of sunlight on the stubble...

Bruno's father is big, tough and blundering; his mother tiny and timid but fierce when it came to protecting her youngest child in particular; his older brothers are approaching manhood and are full of bravado and fun; his sisters are feminine, and the older girl is desperate to have bathroom amenities added to the home; his Grandad clever, devious at times, humorous and a beloved member of the family.

Dad was a big man - six feet tall and an axe handle across the shoulders. Each of his hands was like a leg of mutton. In an emergency, Dad was always reliable. He was strong and quick, even if no one could possibly describe him as cool.

A big tear started suddenly in Bruno's eye and he dabbed it hastily with the towel. Dear old Mum! He knew she was near tears herself, but she had a great love in her small body - more than Dad would ever know - and Bruno felt it suddenly like a warm and living thing.

Sun on the Stubble is a hilarious, loving, and often poignant portrayal of a young man growing up in post World War II rural Australia. Colin Thiele managed to write a very humorous story interspersed with gems showing facets of the love between a mother and her child.

Most of my children would say it was the best book we'd ever read aloud to them. It's definitely the funniest. It's suitable for family reading although I'd suggest a quick preview as I skipped a few sections when I first read it aloud as some of my children were quite young at the time. It's easy to do this without ruining the story.

The book pictured above is an Omnibus Edition and includes three other stories set in rural South Australia written by the author.
This is an updated post of my original from about six years ago. This book is too good to miss!


at April 09, 2019
Email ThisBlogThis!Share to TwitterShare to FacebookShare to Pinterest
Labels: Australian Classics, Colin Thiele, Sun on the Stubble

We will be using this for our next family read aloud. I have really enjoyed Colin Thiele's books we have read so far. River Murray Mary has been one of our favourites - another one of your wonderful recommendations :)
Thanks for the reminder to read this book....

This sounds like a really fun book. I'm going to look for it. Probably not in our library, but surely someone on Amazon or eBay will be selling it.

Hi Sharon, I hope you can find a copy & I'd love to hear what you think of it. Humour is one of those things that often doesn't transfer well across cultures - even western ones!

Looks like this is available to watch on Youtube. I think I'll try it that way first. It sounds like a lot of fun...but you are right, humor is tricky!

I haven’t actually seen the TV series so might look it up. Hope you enjoy it. 🙂