The Prisoner of Zenda by Anthony Hope


Originally published in 1894, Anthony Hope's swashbuckling tale of political intrigue, deception and romance set in the fictional country of Ruritania, has been the inspiration for countless imitations since its first appearance. 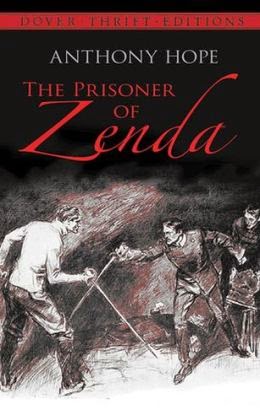 Twenty-nine year old Rudolph Rassendyll was characterised by a long nose and a shock of red hair, the inheritance of a family scandal generations beforehand which involved Prince Rudolph the Third of Ruritania. He enjoyed a comfortable and enviable life on two thousand pounds a year bequeathed to him by his parents and, according to his sister-in-law, he 'had done nothing but knock around.'
While his father was alive, family sensibilities had avoided mention of Ruritania, but now upon hearing that Rudolph the Fifth was about to be crowned in Ruritania, Rudolph decided to secretly make his way to the centre of Europe for the coronation.
From here on in the story picks up pace. Rudolph bears a striking resemblance to the crown prince and when the prince is drugged by his wicked half brother in a bid to seize power, Rudolph agrees to impersonate the King so that the coronation can go ahead.
Aside from the fact that this is an exciting tale, there is a deeper thread which shows the transformation of a carefree, dare-devilling and irresponsible young man into that of a hero who learns a sense of duty and true manliness.


"It is not the king," said old Sapt again; and a sudden sob broke from tender-hearted Fritz.
It was the sob that told her no comedy was afoot.
"He is the king!" she cried. "It is the king's face - the king's ring - my ring! It is my love!"
"Your love, madame," said old Sapt, "but not the king. The king is there in the Castle. This gentleman - "
"Look at me, Rudolph! Look at me!" she cried, taking my face between her hands. "Why do you let them torment me? Tell me what it means!"
Then I spoke, gazing into her yes.
"God forgive me, Madame!" I said. "I am not the king!"
Suitable for around age 14 and up and a good kindle version can be found free here.
Librivox also has an audio version narrated by Andy Minter.
Labels: Books for Teens The Prisoner of Zenda

Silvia said…
I like what you showcased... LOL... so many good books as they grow. You are always an inspiration, and I am glad your children are older, so that I can see a glimpse of what is coming!
12 May 2014 at 22:36

hopeinbrazil said…
Happy to know about the Librivox version. I have wanted to read this book and I love Andy Minter!
17 May 2014 at 05:47