Getting Started with Dickens - Nicholas Nickleby


My memory is that A Tale of Two Cities was the first book I read by Charles Dickens. Of all his novels, A Tale of Two Cities and Great Expectations are possibly his most read books - so it seems to me.
I've read eleven of Dickens's novels and Nicholas Nickleby has been the easiest plot of all to follow.

According to G.K. Chesterton, the book Nicholas Nickleby marked a crucial turning point for Charles Dickens. This was his fourth book, the previous three being the Sketches by Boz, The Pickwick Papers, and Oliver Twist. Although these three books were successful, they were of a different design but the writing of Nicholas Nickleby 'coincided with his resolution to be a great novelist and his final belief that he could be one.'

Nicholas Nickleby is Dickens’s first romantic novel because it is his first novel with a proper and dignified romantic hero; which means, of course, a somewhat chivalrous young donkey. The hero of Pickwick is an old man. The hero of Oliver Twist is a child...
But Nicholas Nickleby is a proper, formal, and ceremonial hero. He has no psychology; he has not even any particular character; but he is made deliberately a hero—young, poor, brave, unimpeachable, and ultimately triumphant.

The story of The Life and Adventures of Nicholas Nickleby begins with the account of how Mr. Nicholas Nickleby Snr. loses his fortune, and his will to live, and so dies leaving behind his wife and their two children: Nicholas, nearly nineteen years of age and Kate, a couple of years younger. With no means of support, Mrs Nickleby and her children must travel to London to seek assistance from Mr. Ralph Nickleby, the dead man's older brother, who as it turns out, is a cunning and avaricious man of business who takes an instant dislike to his nephew.
On the pretext of providing young Nicholas with a good opportunity for advancement, Ralph finds him a position with a Yorkshire schoolmaster, a Mr. Wackford Squeers, and promises to provide for Mrs Nickleby and Kate.
Nicholas soon finds Mr. Squeers' boarding school and his treatment of the 'students' intolerable and in a rush of indignation thrashes the school master and leaves the establishment taking with him, Smike, one of the ill-used boarders who had become attached to him because of the kindness Nicholas had shown to him.
Meanwhile, back in London, Ralph had brought Kate into contact with some of his dubious acquaintances in order to gain an advantage with them and her life was made miserable.
Mrs Nickleby, being a silly, undiscerning type of woman, is of no help to her suffering daughter and indulges in dreams of Kate marrying one of her brother-in-law's rich acquaintances.
Nicholas returns to London, confronts Ralph, and removes his mother and sister to safer quarters. After a series of fortuitous events, he finds a good situation with the brothers Cheeryble but his Uncle is more than ever determined to crush him and employs various schemes in order to accomplish this.
In the course of his employment with the generous hearted brothers, Nicholas is asked to perform a delicate task involving a beautiful young girl who is in desperate need and in the course of his duty he discovers that her selfish father has promised her in marriage to an old usurer in return for an allowance which would enable him to live comfortably. Nicholas discovers that his Uncle is behind this scheme.

The story is well-paced and Nicholas plunges from one adventure to another in true romantic fashion. The book is long, 65 chapters, but even so, I'd recommend it as a good entry into the work of Dickens if you haven't read him before. The characters are not treated as fully as those in some of his other novels and there is a buoyancy in the writing that isn't found in his darker novels such as Little Dorrit or Our Mutual Friend. It is an enjoyable read and if you wanted to introduce Dickens to your child it would be a good choice for someone around the age of 15 or 16.

There are numerous online copies as the book is in the public domain. I like this version from the University of Adelaide best.

Librivox has a wonderful recording performed by Mil Nicholson, a professional actress. Her website is here and if you enjoy her reading you can leave her a comment. 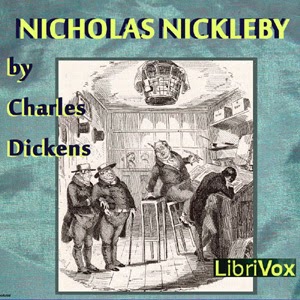 I've been wanting to give this reader at Librivox a try. Thanks for the book review and the "push" to actually do it.

My daughter was in a play of this when she was in eighth grade. Fun book and fun play. She was the shop keepers assisant.