'She had been forced into prudence in her youth, she had learned romance as she grew older - the natural sequel of an unnatural beginning.'

Jane Austen began her last novel, Persuasion, in 1815 and finished it a few months before her death in 1817. Published posthumously in 1818, Persuasion is my favourite novel by Jane Austen, with Pride & Prejudice a close second. Although still replete with Austen's wonderful wit and irony, (she caricatures Sir Walter Elliot brilliantly) Persuasion is overshadowed by a sombreness not found in her other writing.

The heroine, Anne Elliot, is a woman in her late twenties - almost an 'old maid' by the standard of those days - unlike Austen's other books where the protagonists are younger women. They too suffer disappointments and heartaches, but these are of short duration and misunderstandings are soon overcome.
Anne Elliot had her chance at an early marriage and didn't take it. Eight years later, she is still single and as far as most people are concerned, will in all likelihood remain so.

When Anne was fourteen years old her mother, Lady Elliot, died leaving her conceited and silly husband, Sir Walter Elliot to care for Anne and her two sisters, Elizabeth, then aged sixteen and Mary, aged ten.
Before her death Lady Elliot was assured that her intimate friend, Lady Russell, would help maintain the principles and instruction she had been so anxious to instil in her daughters, and that sensible lady had been true to her promise.

Anne had been in love and had been loved in return by Captain Frederick Wentworth when she was nineteen years old, but had been 'persuaded' against an alliance with a young man 'who had nothing but himself to recommend him, and no hopes of attaining affluence...' by Lady Russell, who valued and loved Anne most of all, seeing in her the qualities of her dear mother.
Wentworth, deeply hurt and embittered, consequently left the country after the engagement was broken.

Another proposal of marriage came for Anne at the age of twenty-two, but Frederick Wentworth still stood in her memory. She refused the offer and her suitor, Charles Musgrove, married her selfish younger sister, Mary, instead.
Lady Russell, not regretting her previous persuasive influence upon Anne's, was now anxious for Anne's future and lamented the fact she had refused Charles.

Captain Wentworth, meanwhile, prospered and made his fortune by distinguishing himself in the navy and as the story begins, he is about to return to England eight years after quitting the place.
Anne, at the ripe old age of twenty-seven, has 'lost her bloom' and when circumstances bring them into each other's company again, Anne is mortified when she learns of Wentworth's remark to another upon seeing her again: 'she was so altered I should not have known her again.'
Anne does not think of him any differently but resigns herself to the fact that 'her power with him was gone forever.'

I read Persuasion about twelve years ago and since then I've discovered more of the author's background and partly because of that I've appreciated this book more the second time around.
G.K. Chesterton (an Austen admirer) said that,

'The first use of good literature is that it prevents a man from being merely modern. To be merely modern is to condemn oneself to an ultimate narrowness.'

Persuasion is a glimpse back into another era, a pre-modern time, which we are inclined to look upon as narrow.
In the Penguin edition I have, there is a comment in the introduction by D.W. Harding which I think echoes Chesterton's ideas:

'Embodied and given life in the social realities of her own period, Jane Austen's satire still has currency in ours. The sense of the past which we need in reading it has two aspects, and the more familiar - the ability to enter into her social world and its outlook - counts for less than the other. The other is the ability to notice the people and the institutions of our own time on which her eye would have rested and her judgement been passed, and that means recognizing contemporary equivalents rather than seeking identities.'

Jane Austen was still working on Persuasion when she began to suffer from the illness which eventually took her life. In 1916, it became evident that her health was declining but although her body was losing its strength, her mind remained sharp and active.
She brought Persuasion to an end during this period but she was unsatisfied with the story. Her nephew, J. E. Austen-Leigh, in his Memoir of his aunt wrote:

'She thought it tame and flat, and was desirous of producing something better. This weighed upon her mind, the more so probably on account of the weak state of her health; so that one night she retired to rest in very low spirits. But such depression was little in accordance with her nature, and was soon shaken off. The next morning she awoke to more cheerful views and brighter inspirations: the sense of power revived; and imagination resumed its course. She cancelled the condemned chapter, and wrote two others, entirely different, in its stead.'

The new chapters include the touching conversation between Anne and Captain Harville, overheard by Wentworth, in which Anne reveals her heart:

'We certainly do not forget you, as soon as you forget us. It is, perhaps our fate rather than our merit. We cannot help ourselves...


All the privilege I claim for my own sex...is that of loving longest, when existence or when hope is gone.'

I enjoyed both these film versions. The first (1995) has Ciarin Hinds playing the character of Wentworth and Amanda Root, that of Anne Elliot. It has an earthy feel and is a good reproduction of the story. I watched it some time ago and can't remember too many details but it was a faithful rendering of Austen. 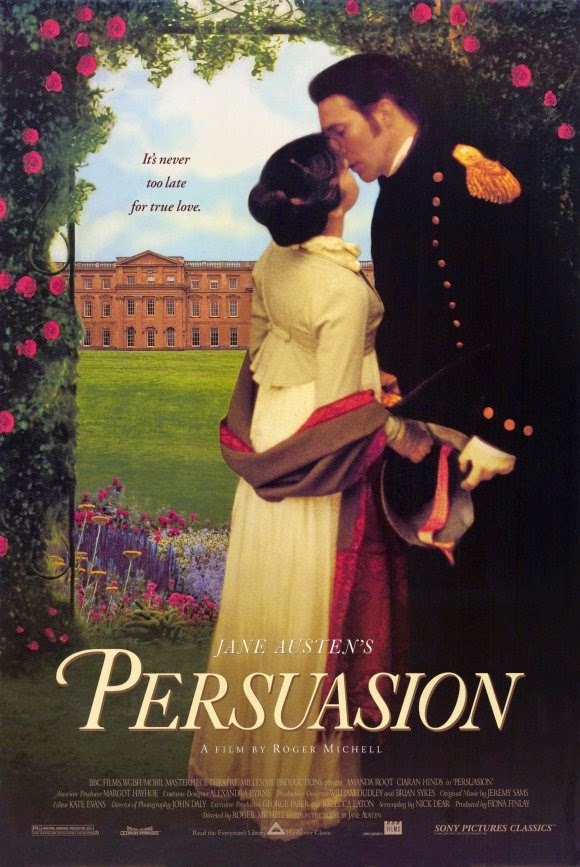 Although still adhering to the basic story, this version with Rupert Penry-Jones and Sally Hawkins (2007) in the lead roles is all about atmosphere. There is a quiet sense of desperation running through everything. It's more of an emotional journey than anything else. It contained elements that were asynchronous - Anne Elliot wouldn't have run through Bath - but seeing both films certainly enhanced my enjoyment. 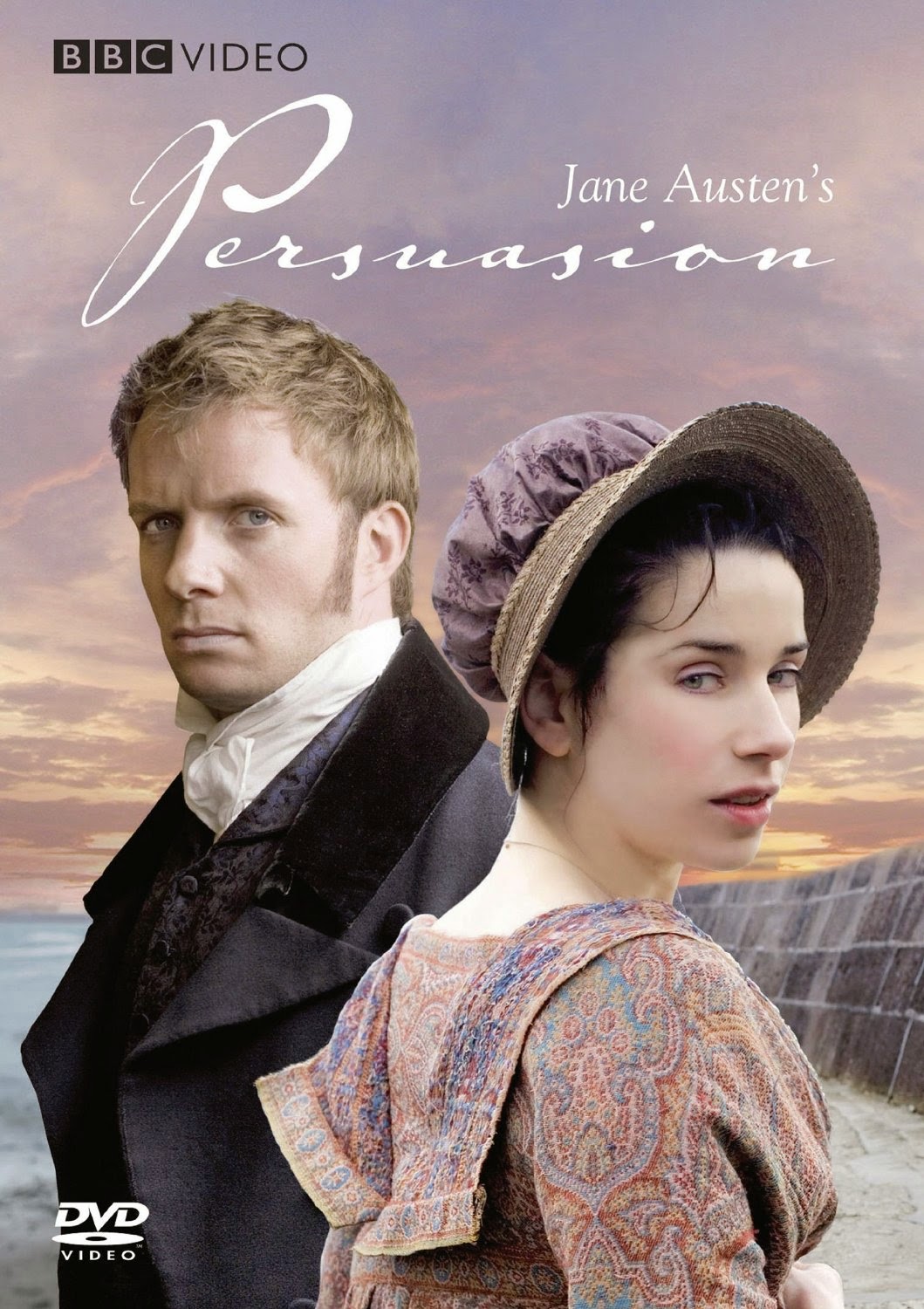 This review is linked to Back to the Classics 2015 under A Classic by a Woman and also to 50 Classics in 5 Years.

Labels: 50 Classics in 5 Years Back to the Classics 2015 Jane Austen

dawn said…
I do so love Persuasion. It took me some time - and tries - to get past the first chapter, but once I did I loved it. Those scenes, that quote, the letter at the end pulse with so much restrained emotion. Lovely.
21 January 2015 at 23:18

Unknown said…
Persuasion is my favorite also, with Pride & Prejudice a close second. ;) And I really enjoy those to movies also!!! I'm hoping to reread Persuasion this year. :)
22 January 2015 at 02:06

Amy said…
I really don't have time for more books, but you make it sound so enticing I just want to drop everything else and read for a few days. Thanks for taking the time to put all these thoughts together. :)
22 January 2015 at 03:11

Cleo said…
I like how you added quotes from others in your review and the extra information about Austen. It's always so helpful to have this type of information for a greater appreciation of the book. I must say, I agree with her that the book feels a little flat compared to her other wonderful works, but it is enjoyable nevertheless. If only she had lived longer!

I'm still trying to follow the pace of the read-along, but I may start to go faster. I wanted to start Sense and Sensibility next month.
22 January 2015 at 09:11

Sharon said…
This post makes me want to grab Persuasion, find a comfy spot, and sit up too late. Persuasion definitely has a different feel from Austen's other works.
22 January 2015 at 14:49

Carol said…
I read all her books a long time ago & retreading Persuasion was an impetuous to read them all again. I never used to reread books but I think I get more out of them now - maybe I read more intentionally these days.
24 January 2015 at 22:05

hopeinbrazil said…
I did not like Persuasion the first time around because I thought Anne was too boring. But after I watched the movie, I gave it another try and changed my opinion completely. It's one of my favorites now.
24 January 2015 at 22:06

Carol said…
I usually always enjoy the BBC versions of Austen (and Dickens also). They've helped me appreciate the books more because they are done so well.
24 January 2015 at 22:38