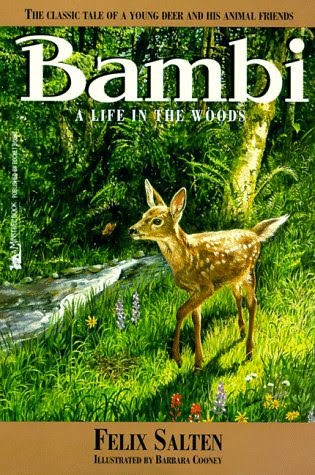 Bambi is the life study of a forest deer who begins his life under the care of his doting mother, happy and carefree, and surrounded by the other forest animals.
One day his mother disappears for a while and for the first time he finds himself alone. He wanders around troubled and in despair. In his misery be begins to call for her when suddenly, one of the father deer appears in front of him, proud and powerful.

"What are you crying about?" the old stag asked severely...
"Can't you stay by yourself? Shame on you!"

He is the old Prince, the biggest stag in the forest.
Before the younger deer could reply, the old stag disappears but Bambi is awed by the encounter. After this the great Prince is never far from his thoughts and Bambi longs to win his approval.

Bambi begins to learn about Man. The forest animals say He is all powerful. He kills what He wants and nothing can stop Him.
The old stag returns and visits Bambi from time to time. He teaches him wisdom and shows him how to preserve himself. He watches over Bambi and saves his life when he is wounded by Him.
Then comes the day when the old stag gives Bambi his final lesson. Following a terrifying scent, the old stag leads Bambi to where a poacher lies dead upon the ground.

"Do you see, Bambi," the old stag went on, "do you see how He's lying there dead, like all of us? He isn't all-powerful as they say. Everything that lives and grows doesn't come from Him...
He has the same fears, the same needs, and suffers in the same way...
Do you understand me, Bambi?"


Bambi was inspired, and said trembling, "There is Another who is over us all, over us and over Him."

Bambi is a gem, delicately and poetically written. As with some other notable children's classics (Pinocchio, Jungle Book and Grimm's Fairy Tales, for example)  the original book has been adapted to death, condensed, sanitised, swallowed up and presented as a movie that misses the real story. We know all about Bambi, Pinocchio, Mowgli and Snow White but we have not met them personally.

Felix Salten was the pseudonym of Austrian author and critic, Siegmund Saltzman. Born in Budapest, he lived in Vienna but settled in Switzerland after fleeing from the Nazis. He originally wrote Bambi in German in 1923 and in 1928 Simon & Schuster published the first English edition. This edition has a forward written by novelist and playwright John Galsworthy, who describes the story as 'delicious,' and, 'a little masterpiece.'

Bambi is scheduled as a free read in the Ambleside Online Year 4 curriculum.

Updated to add: the original book is online here.

This book is part of my reading for Back to the Classics 2015 (a Children's Classic), The Classics Club and the 2015 Classic Children's Literature Event.

at January 28, 2015
Email ThisBlogThis!Share to TwitterShare to FacebookShare to Pinterest
Labels: 50 Classics in 5 Years, Back to the Classics 2015, Children's Classics, Literature

What lovely information about the book and the author! I was just mentioning to one of my blogging friends today that Disney's Bambi gave me nightmares as a child (although I loved Flower and Thumper). I really need to read the book to get the real thing. I just read Pinocchio and it was sooooo different from the Disney Pinocchio ...... MUCH better!

Ha ha! Flower & Thumper aren't even mentioned in the book. I agree about Pinocchio. All I remember from the movie was his nose getting longer when he lied.

We just loved Bambi when we read it as a family a few years ago. So much to think about and talk about. So much to see with its lush descriptions. I loved these reminders. Thanks, Carol!

It's been on my shelf waiting for me because like you mentioned, I only know the Disneyfied version which is not the same as having read it for myself. Thank you for highlighting this book.

I've never read Bambi and only have a limited acquaitance with the movie, but this sounds quite different from the story I'm familiar with. I may have to look for it sometime, as now I'm curious to know more about the original. Thanks for sharing!

I'm with everyone else here! I've seen the Disney movie, but I've never read this book. I'll have to track it down to read to my kids this summer. I love reading stories about nature and animals to my kids while we sit outside on warm days =)

I have never even thought of adding this to my TBR list even though I really enjoy childrens' classics (I don't know why.) Thanks so much for the review that whetted my appetite.

I first read Bambi as a kid and have re-read it many times. It’s a really magical book. He succeeds at creating such a strong sense of place that one’s mind is as if transported to the forest. I believe Felix Salten originally wrote it for an adult audience but generations of children have loved it. Probably not best for very young children though as it’s certainly more violent and traumatic than the Disney version. But I loved it at around age 9 or 10 (even though I cried a lot) and I still love it as an older adult.

Hi, I only just saw your comment so I apologise that I’m so late in replying! I didn’t know that he originally intended it for adults but it is as you say, a magical story, and the fact that it appeals to such a wide age range attests to Salten’s ability as a writer. Thanks for taking the time to comment!