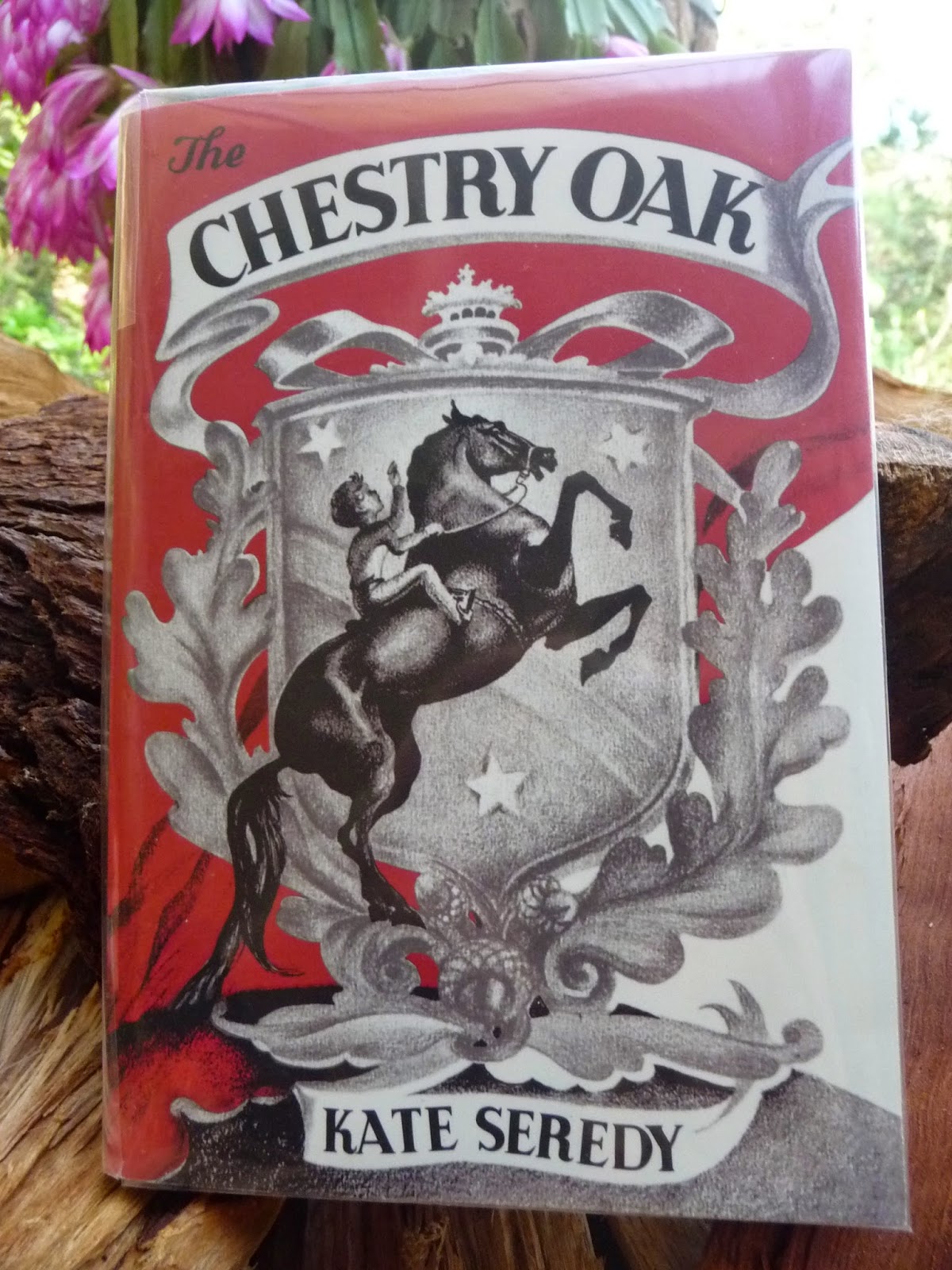 The Chestry Oak, originally published in 1948, is a book I first heard about nearly twenty years ago. It had been out of print for a good number of years even then, but every now and again I'd do an internet search only to find one or two old copies exorbitantly priced.
Well-written World War II books for children are irresistible in my opinion, and considering that this one was written so close to the end of WWII, by a Hungarian author (Kate Seredy emigrated to the USA in 1922), I was really hoping that one day it would be reprinted. And recently Purple House Press did so.

The story opens in Hungary where five year old Michael, Prince of Chestry and his beloved nurse, Nana, awaken to the drone of overhead planes as Allied aircraft fill the skies. The outside world has changed and those changes are beginning to be felt even within Chestry Castle.
Mr John, his English tutor, leaves suddenly (we later find that he is killed in a concentration camp) and in his place comes the Professor:

Now he had only the Professor to teach him everything one learned out of books, and even the books were different, new and full of what the Professor called "facts."


Professor never sang or laughed, and when he smiled it was as if it hurt him someplace.
As the story progresses, an ominous presence in the castle is revealed, growing stronger with each passing day. Intruders come and go. Dangerous intruders, ill with greed and a dreadful conceit.
Hungary has been invaded by the Nazis and Michael's father is forced into seeming collusion with the enemy to protect his people from the same fate as Poland. Nana knows this, and even at a young age, Michael begins to understand also that his father is 'pretending' to be co-operating with the enemy. Although others such as the old butler think otherwise:

(Nana) heard Antal almost sob the words, "They have our Prince in their power now...and day by day, hour by hour, the teachings of the Professor are poisoning the very soul of his child, the last Chestry, Michael."

Before long the castle is turned into Headquarters for the German High Command and Michael's father sends Nana back to her people for her own safety.
Michael visits Nana and each time he has something to tell her...a sentence or a line of poetry his father asked him to say...it made no sense to him:

"Slowly, her full round face bent over the nest. It was full of snakes."

One day the Nazis decide that Michael is to be sent to Vienna. His father tells him that there will be a raid on Chestry Valley that very night. Michael is to escape on horseback and go to Nana. She will look after him and tell him what is to be done. At the last minute, Michael is unable to part with his beloved horse, Midnight, and takes him instead of the reliable mount his father instructs him to ride - a decision which is to have far reaching consequences. 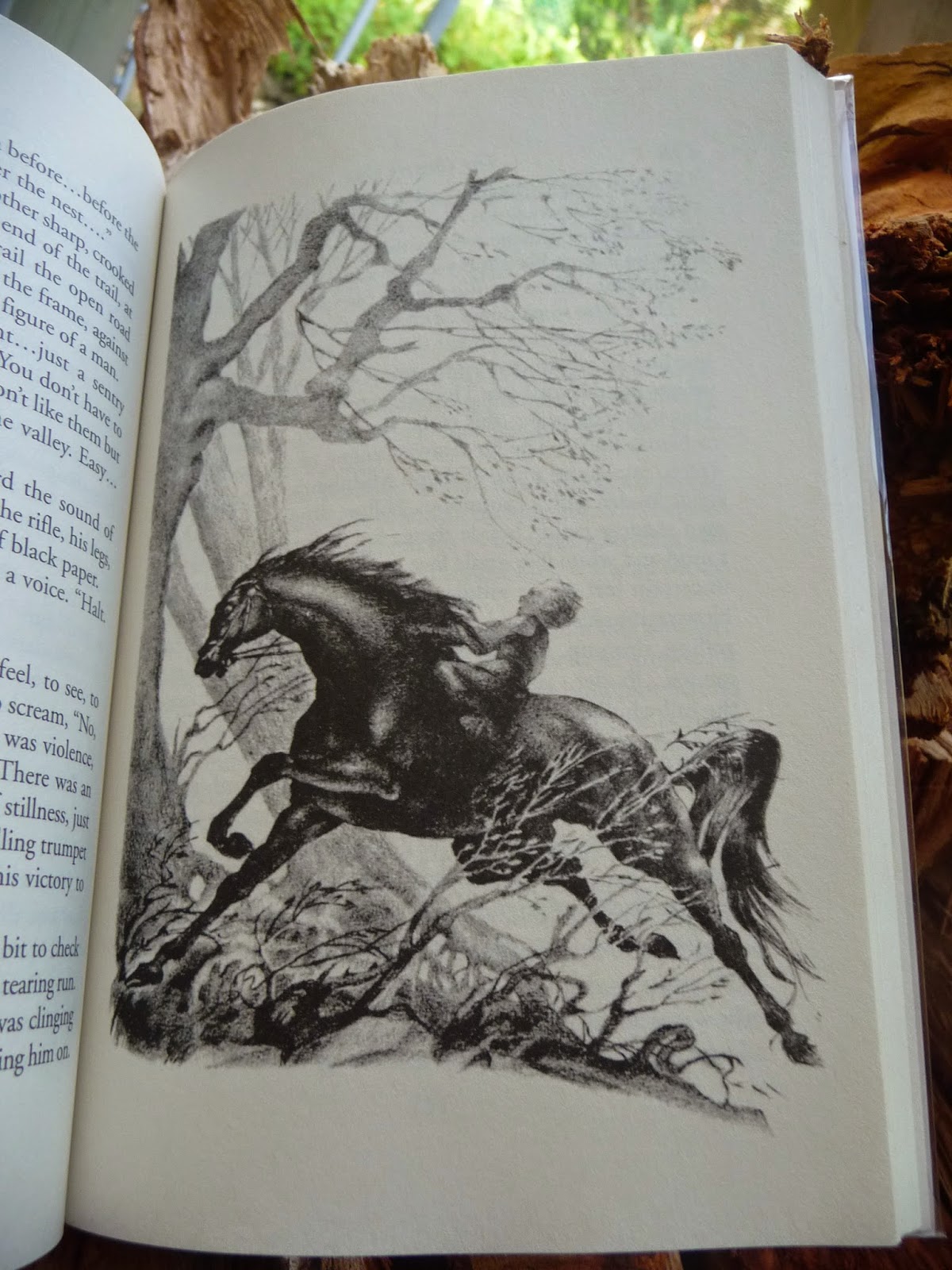 The book moves slowly at first but half way through it picks up pace and the story becomes quite engrossing.
Kate Seredy has an unusual style, very lyrical, and with some little gems of thought that I didn't always pick up at first. It was only as the story unfolded more that these little pieces came together and filled in the gaps. At first the author seems to write as if to a young child but then expresses a depth that goes beyond a younger child's grasp (although it is still suitable for a younger age).
For this reason, as well as the fact that there are some beautiful ideals of courage, faith and integrity woven into the story, I think the book lends itself well to being read aloud to a wide range of ages. It is suggested as a free read in Year 6 of Ambleside Online but as it has been out of print for so long it's possibly a book that hasn't been used by many AO families.

He had no name for the sick trembling that shook him, for he had never been shamed before. He only knew what it was not - not fear, not anger, not pain, yet all of them, fused into a torment he didn't know how to cope with, a foreign, freezing lump inside him, so hateful to feel that his muscles contorted painfully in long, wrenching shivers.


...The earth had risen, split open before him, and out of the dark chasm the voice of the valley had cried words of contempt. The trees and the multitudes of grasses had turned into fingers pointing in accusation at him, at his father, at Chestry Castle, "You are the enemy."

Oh, lucky you!! What a lovely book! I have her The Good Master, The Singing Tree and The White Stag but I hadn't even heard of this one. Thanks for the introduction!

Wonderful. I bought the reprint ... Can't wait to read it!

I'm also have been scouring ebay for a couple of years looking for a elusive copy. So I also am planning on getting a copy from the new publisher. We have really enjoyed the ones we do have.

You have a wonderful eye for a good book..I'd forgotten this was being reprinted.
Margaret.

I love WWII history and good children's lit so this sounds like a winner.

I also LOVE WWII lit, especially children's. I have seen Seredy's name forever (I host a Newbery challenge), but I still haven't read one of her books. I must recitfy that! Thanks for a lovely review.

I just found your blog and am totally coveting your gorgeous copy of The Chestry Oak, LOL! I read this book aloud several years ago and we loved it! I've been searching for a copy for our personal library since. I haven't ordered the reprint yet, but may. I'm really holding out for an original hardback :)

You just might find a copy for a reasonable price now that it's back in print.

How neat that it is being reprinted! Thanks for always sharing such great book suggestions!

I've been wanting to read this book for a while now! Oh, those illustrations!!! Thanks for sharing this at Booknificent Thursday!
Tina