An Old Captivity is the fifth book I've read by Nevil Shute (1899-1960). He is definitely an author I want to keep on reading. An engineer by trade, his great love was aircraft, and details of flying and various types of aircraft are often found in his stories. I'm not very technically inclined but I don't mind the detailed explanations he includes in some of his books.

There is a website devoted to Nevil Shute which includes an address made by his daughter at a Nevil Shute Celebration in 1999 in which she talks about her father and the type of man he was. The main character in An Old Captivity, David Ross, is a similar sort of character to the author. 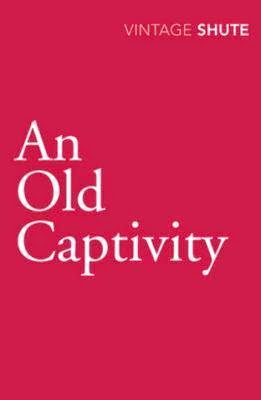 The first couple of pages are narrated in the first person by a psychiatrist who is travelling through France on the same train as Ross. When the train is prevented from continuing on its journey to Rome due to a breakdown of the train ahead of them, the two men decide to have dinner together.
Over dessert, Ross suddenly asks the psychiatrist a question concerning dreams and reality. It is clear that Ross is concerned about his mental stability.

He stared at me across the table; there was a strained look about him, and I knew we were coming to the root of things...


I said gently: "We've got a long evening  before us. Would you like to tell me about it?"

What follows is a third person narrative of the events leading up to the meeting on the train. Donald Ross is employed by Oxford archaeologist, Mr. Lockwood, to pilot a plane to take him to Greenland on a surveying expedition.
Much to Ross's dismay, the don's very attractive but antagonistic daughter, Alix, insists on travelling with them, which seriously complicates their journey.
Nevil Shute usually includes a romantic thread in his stories and this book is no exception.
Upon reaching the old Viking colony at Brattalid, the combination of overwork, exhaustion and the use of medication to help him sleep, brings Ross to a point where he confuses reality.
At this point the chronology of the story fluctuates. The atmosphere of the old colony seeps into Ross's dreams and he becomes Haki, serving under Leif the Lucky with his woman, Hekja. When he awakes it is in a state of confusion. The dreams are so real; backed by evidence and circumstances.
It is an interesting twist to this unusual story but the book ends rather abruptly. Maybe Nevil Shute didn't know how to 'land' this one. Although it was an enjoyable, compelling story, it was a frustrating end for me as I kept thinking of what might have happened.
During the expedition Ross grew fond of Alix. She began to appreciate his skill and his hard work and was genuinely concerned for his welfare when he was in a delirious state.  Did the budding romance fizzle out on their return to England? Why was Ross on a train to Rome at the beginning of the book and why didn't Shute take us back to the psychiatrist?

I read this in a Vintage Classic, one of the few paperbacks I'm happy to buy.

Thanks for sharing this author, Carol ...... I'd completely forgotten about him. There are so many good ones out there. I always wish I had much more time to read. I'm missing the Dewey 24 hr Marathon today because of other commitments. Sigh! But such is life!

This author has got under my skin. His books are so readable and lighter than some of the others I've been reading lately. They are my little diversionary pleasures.