Beauty Will Save the World 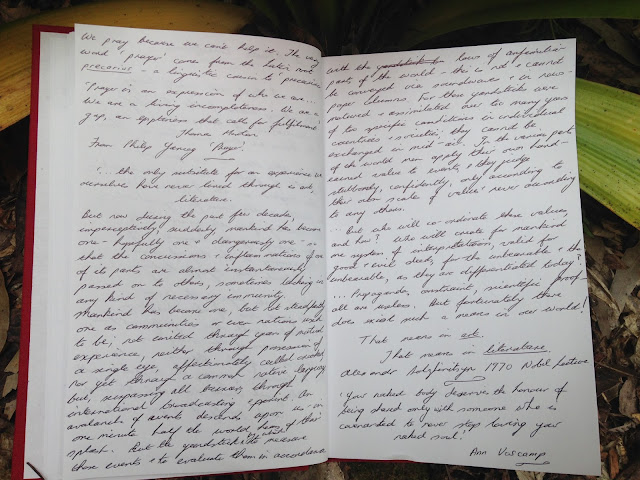 I've been reading through Alexandr Solzhenitsyn's 1970's Nobel Lecture in Literature after hearing it quoted in a message on Beauty a few weeks ago. It's so good that I've decided to include it in Benj's Ambleside Online Year 11 (Twentieth Century) plans that I'm preparing for next year.
Solzhenitsyn (1918-2008) believed that literature, together with language, protects the soul of a nation and that if a nation's literature is disturbed by the intervention of power, it will result in the closing down of its heart. As a survivor of a Communist gulag, he spoke from personal experience.

...the only substitute for an experience we ourselves have never lived through is art, literature.

The House I Left Behind, David Copperfield, Bleak House, Our Mutual Friend, The Mayor of Casterbridge, The Gulag Archipelago, One Day in the Life of Ivan Denisovich, Crime & Punishment, Jane Eyre, Ethan Frome - these are some of the books that have allowed me to live through experiences I have never had.

Reading about life in Iran during the 1979 Revolution and the oppression suffered by dissidents in  Communist Russia opened my heart to the suffering in those times. The impoverished masses on the streets of London during the 1800's, the integrity shown by people in difficult circumstances and the tragic results stemming from immoral choices, presented truth as a living force and inflammed my soul.
The smattering of literature that I was exposed to during my growing up years lit a flickering little flame that was rekindled in later years. My soul had known fleeting revelations over those years, such as the time I read The Lion, the Witch and the Wardrobe around the age of eleven or twelve, and at age thirteen when I heard an older girl at school reciting verses that I remembered for over thirty years before I discovered their origin:

Full fathom five thy father lies;
Of his bones are coral made;

Reading Shakespeare with my own children many years later I found that these verses were a part of Ariel's song in The Tempest. I left that school before I had a chance to discover his work and for six years afterwards I felt that Truth and Goodness had in many ways been crushed out of my life. But as Solzenhitsyn expressed so exquisitely, 'the fantastic, unpredictable, unexpected stems of Beauty' pushed through.

Archaeologists have not discovered stages of human existence so early that they were without art. Right back in the early morning twilight saga of mankind we received it from Hands which we were too slow to discern. And we are too slow to ask: FOR WHAT PURPOSE have we been given this gift? What are we to do with it?

Not everything assumes a name. Some things lead beyond words. Art inflames even a frozen, darkened soul to a high spiritual experience. Through art we are sometimes visited - dimly, briefly - by revelations such as cannot be produced by rational thinking.

...perhaps that ancient trinity of Truth, Goodness and Beauty is not simply an empty, faded formula as we thought in the days of our self-confident, materialistic youth? If the tops of these three trees converge, as the scholars maintained, but the too blatant, too direct stems of Truth and Goodness are crushed, cut down, not allowed through - then perhaps the fantastic, unpredictable, unexpected stems of Beauty will push through and soar TO THAT VERY SAME PLACE, and in so doing will fulfil the work of all three?

In that case Dostoevsky's remark, "Beauty will save the world," was not a careless phrase but a prophecy? After all HE was granted to see much, a man of fantastic illumination.

And in that case art, literature might really be able to to help the world today?

The full text of the speech is here.

Education is a Life said…
What a thought-provoking quote. I think truth, goodness, and beauty are not easily separated. Something beautiful will often have truth and/or goodness encapsulated in its beauty. Maybe that is why it can rise and represent both goodness and truth when those are crushed down. I read a book a while ago about a feral child. She spoke of living and thinking just like an animal. What struck me was two things that broke through and betrayed her human-ness. The first was that she tried to make paints with the materials in the jungle, and made art. The second was a longing for love and human connection. I'm sorry I can't think of the title right now.
8 October 2015 at 23:06

Carol said…
I keep having to re-read his words to get my mind around what he's saying. If you ever remember the name of that book I'd be interested to know what it was.
10 October 2015 at 15:18

Celeste said…
Lovely thoughts here, Carol. One thing I have found interesting is that although the teachers of the liberal arts used to believe in the power of literature, music, and other "truth and beauty" experiences to cure the ills of man and to raise us to a higher level of humanity (or bring us closer to God, depending on religious background), universities have so downgraded that over the past few decades that the case for the liberal arts has so few apologists in the world as to seem irrelevant. It's such a sad development. I remember being so saddened at entering a PhD program in English and finding myself one of the few people who believed that the traditional liberal arts were actually of value. Everyone else seemed to want to "relativize" everything. Anyway, your words here about the power those kinds of experiences of beauty reminded me of that. I think it is mostly people who have not experienced the saving power of beauty that cannot believe it to be true.
19 October 2015 at 07:44

Amy Maze said…
Great thoughts to ponder. I agree with the comment above that truth, goodness, and beauty really can't be separated. The trouble comes with our faulty thinking and inability to understand. It is interesting what you wrote about beauty possibly being the saving force in a world that blatantly stomps on the idea of truth and calls Good...Bad, and Bad...Good. Thanks for sparking our minds again today!
20 October 2015 at 14:56