Books in a Series for Young Voracious Readers - Part 1

Some children read very quickly and are always asking for more books. Although all my children loved reading, two had insatiable reading habits. They were/are both active and have interests in many different areas so it wasn't as if they sat around all day reading. They just had the ability to read extremely quickly.
When children are still quite young it is sometimes difficult to find suitable reading material for their age. I didn't want to give my voracious readers any old book to stop them harrassing me, although at times I told them to go back and re-read some.
This is the beginning of some posts with lists of books in a series that I felt comfortable using with our children when they were around the ages of  eight to ten and that they all enjoyed at one stage or another.

I'd already mentioned the Redwall series for reluctant readers but they are great books for the book gobblers also as there are a number of them and they are well written.
In this post I'll concentrate on another family favourite:

The Biggles books are a series of books (one hundred and two altogether) written between 1932 and 1968 by W.E. Johns (1893-1968). Some are difficult to find as they're out of print but others have been reprinted in the past few years. They are also suitable for reluctant readers, especially boys, and have a wide appeal for a variety of ages. We know a number of adults who still have their boyhood Biggles' collections.
W.E. Johns was a British fighter pilot during WW1 and his writing reflects his knowledge of aircraft and air battles. His books are adventurous, fun to read and are free from pessimism. 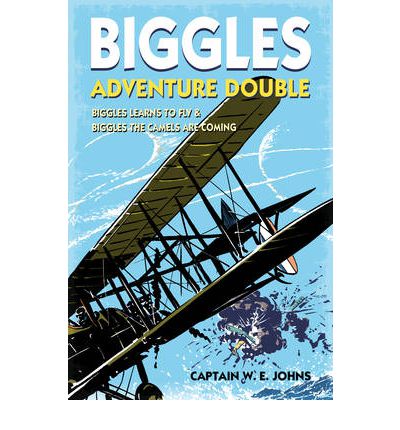 Moozle loves this series and has become quite an expert on old war planes as I found out when she got into a conversation with her brother's orthodontist, an aviation enthusiast & expert on model planes. Here is what she said when I asked her which ones she would recommend reading first:

"The first book in the Biggles series by W.E.Johns you should read is The Boy Biggles.
A good book of adventures of when Biggles was a boy in India.

Biggles Goes to School - Biggles’ adventures when he’s in school.

Biggles Learns to Fly - it’s situated in WW1, when Biggles learns to fly a Camel, (an aircraft!) in Squadron 266.

The head office tells Biggles to go as a spy into German territory, relying on the fact that someone has mistaken Biggles for another person who is on the German side.

‘The General’s face was grave when he returned and sat down at his desk, and he eyed Biggles speculatively.

“Now, Bigglesworth,” he commenced, “I am going to have a very serious talk with you, and I want you to listen carefully. While I have been away I have examined the situation from every possible angle, I believe that Broglace’s next move will be to will be to make a definite offer to you, provided you do not give him cause for alarm. If our assumption is correct, he will suggest that you work for him, which means, of course, for Germany; I would like you to except that offer.”

The Camels are Coming -

This is first book W.E. Johns wrote and takes place during WW1 when Biggles was a fighter pilot in France.

Biggles in the Orient -

Biggles is sent to figure the reason why machines are just suddenly falling every day, on a normal flight. The place where’s its happening is Dum Dum, an aircraft station.

Biggles’s friend Angus Mackail has disappeared into a valley, which is advertised as ‘Paradise Valley,’ in South America. Biggles sets out to find him with his trio of friends, Bertie Lissie, Algernon Montgomery Lacey (or Algy Lacey) and ‘Ginger’ Hebblethwaite (he has red hair)."

Thank you to Miss Moozle aged 10 years for her thoughts above.


A bit about the author from a flyleaf of one of his books:

Captain W.E. Johns was born in Hertfordshire in 1893. He flew with the Royal Flying Corps in the First World War and made a daring escape from a German prison camp in 1918. Between the wars he edited Flying and Popular Flying and became a writer for the Ministry of Defence.


For a listing of the books in the order they were written see here.

Virginia Lee said…
Biggles are sort of pricy to get on Amazon or Ebay here in the US. Well, unless you do paperback, which we do not do if we can help it. Hardbacks just last longer as they make their way through everyone. But I did find a hardback volume that had three Biggles stories in it for a decent price (Biggles Learns to Fly and the next two). So we will start with those three and see. I'm hoping that missing his boyhood will be ok. =) Thank you so much for the recommendation!
4 November 2015 at 03:56

Carol said…
Don't worry about reading them in order. We picked ours up when we found them and the older ones read them randomly. Moozle is just in the fortunate position of being the youngest and the work of finding the books has been done by her older siblings - we only recently found the Boy Biggles. Biggles Learns to Fly & The Camels are Coming introduces many of the characters and that's why she thought they were best to read first.
4 November 2015 at 17:39

Tina at Mommynificent.com said…
These look so fun, but I'm thinking finding them here in Malaysia will be a challenge! Thanks for sharing about these books at Booknificent Thursday at Mommynificent.com this week! Always love to have your contributions!
Tina
6 November 2015 at 01:45