Highschool Biology with Living Books: Mr Tompkins Inside Himself... 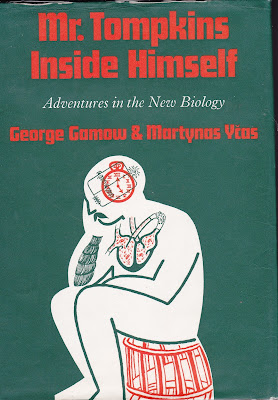 This book has been part of Benj's Science this term. He's also been working through Understanding Physics by Isaac Asimov this year, which he really enjoys. He wasn't keen on doing any more Biology but I thought this book by Gamow would be an interesting and slightly different way of approaching the subject. The author contributed to the development of the Big Bang Theory and that belief is reflected in his writing. Working through selected chapters of Apologia Biology prior to reading this book helped to balance things out.

There are ten chapters to the book and he has read through a chapter per week, except Chapter 6, which he skipped. I read through the first six chapters and flicked through the rest and got together a few extra resources for interest's sake, which I include below. Gamow aquired world-wide fame as the author of scientific books and articles written for the layman, and even a cursory reading of this book helped me understand why. Benj has actually enjoyed this book after his initial reluctance, probably because Gamow has a quirky sense of humour and makes many diversions, and, being a physicist, he often diverts in that direction. 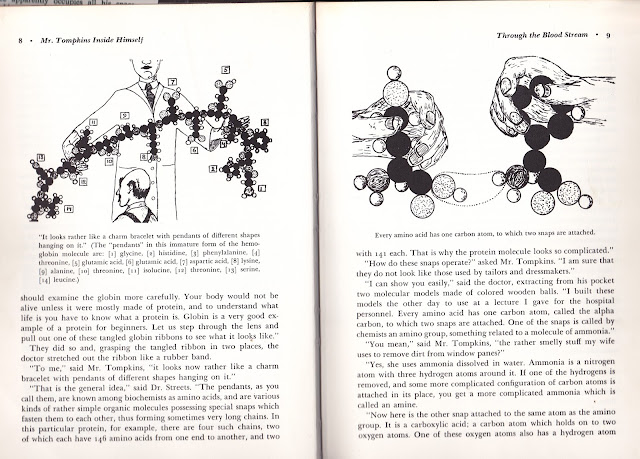 Mr. Tompkins is a teller at a city bank who likes to spend his leisure time relaxing with a book or magazine on popular science. Despite his intense interest in cosmology, atoms, and other scientific topics, he frequently nods off in the middle of his reading. As he sleeps, his vivid imagination takes over and leads him into fantastic worlds where his dreams are often strange and grotesque, but help him grasp the meaning of what he's read.


Chapter 1 - Through the Blood Stream

Truth and beauty in the cell...

Contents of video below:

Smooth, Cardiac, and Skeletal Muscles Create Movement 1:18
Sliding Filament Model 4:52
Skeletal Muscles Are Made of Bundles of Protein Fibers 2:40
Actin and Myosin Myofilaments 3:54
Calcium and ATP Cause the Binding and Unbinding 5:05


Chapter 3 - The Heart on the Wrong Side

Möbius Strip - Benj watched this video and made one and then gave it to his sister to see what she thought of it.

Ants on a Mobius Strip by M.C. Escher

Levo & dextro - this is to do with organic chemistry.

Radiation sickness, alcohol - alcohol is a diuretic as are coffee & tea.
Antioxidants.


Chapter 5 - The Number of the Beast

Benj has covered much of this in Understanding Physics but Gamov adds some humour and spark to this area with Mr Tompkins' adventures.

Flatland: A Romance of Many Dimensions by Edwin A. Abbot, is a book of mathematical fiction that Gamow mentions in this chapter. It was written in 1885 and describes a world of two dimensions. It's online at Gutenberg but I don't know anything else about it.

Double helix - James Watson: 'How We Discovered DNA' - a TED video just over 20 minutes long. Watson mentions Gamow in this video and there is a transcript you can click on to decide if it would be suitable for your student. Some mild language.
Towards the end, Watson talks about what fires him up these days - DNA biopsies to detect diseases  such as breast cancer before it becomes cancer; the loss of pieces of gene/molecules and its association with autism. Very interesting ideas.

Origin of Life -  an explanation of what is needed for abiogenseis by Don Batten of Creation Ministries. Includes an animation on protein synthesis.

There's a lot of information in the video below, presented very rapidly, but well done. It's almost 13 minutes long, but I'd suggest stopping around the 9 min 20 sec mark. There's a rude teenage boy joke just after that, but it also gets more technical. You'll cover Nucleic Acid, DNA, RNA & Replication in that time - which was what the chapter was mostly about. I don't remember any evolutionary material in the segment I watched.

Brownian motion (pg 127) - the random movement of particles suspended in a fluid.

Benj skipped this chapter. It's mostly Darwinian evolution although there are a couple of interesting digressions. Benj had already worked through some of the Apologia Biology text which covered a lot of this. The chapters in Mr Tompkins can be read independently of one another without posing a problem.
Would Darwin be a Darwinist today?


Introduction to number systems and binary:


Nerve synapses - neurotransmitters.
Right and Left brain hemispheres - what's the difference?
Brain function & injury - progresses through the different parts of the brain, their various functions,  and what happens when those parts are injured.

Computers and brains; quite a bit of evolutionary content in this chapter.
brain vs computer

Mr Tompkins talks with his son, Wilfred, who is a scientist, about biology - past, present and future.

Entropy
Vis vitalis - 'an organising force of life, which opposes the tendency to disorder of inorganic materials.'
According to this article, in 1950 vis vitalis 'was sanctioned by Stalin and led the Soviet biological sciences into a blind alley.'

Why I Teach my Kids Evolution

If only Charles Darwin could see his descendant now - Faith reanimated through intellectual pursuit.

Wow! You have gathered so much information here! Thanks for sharing with all of us =)

I'm pretty overwhelmed as well. You've documented quite a number of resources! I've been browsing your blog and am here from the carnival. :)

Hi Christine, thanks for taking the time to comment.