The Immortal Life of Henrietta Lacks by Rebecca Skloot 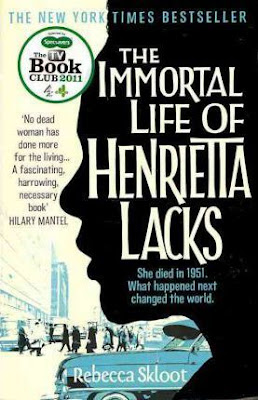 For many years scientists had been trying to grow human cells outside of the human body in order to have a continuous (immortal) line of cells that would constantly replenish and that could be used to study any number of things,  especially viruses. Mouse cells had been cultured successfully, but every attempt to culture human cells had failed.
That was, up until 1951. That year, Henrietta Lacks, a 30 year old black mother of five young children, was admitted to the coloured ward of John Hopkins Hospital to have a biopsy of her cervix. A sample of tissue from her cervix was sent to George Gey, the head of tissue culture research at Hopkins.
At that time, if doctors wanted to use tissue from patients for purely research purposes, patient consent was not required, although it is now.
Henrietta Lack's tumour cells were put into culture and they didn't merely survive, but grew like nothing else had before.
The tumour turned out to be a very aggressive form of cervical cancer, and before long, millions of the cells had reproduced themselves in the laboratory. Gey and his assistants had grown the first immortal human cells which they named 'HeLa,' for Henrietta and Lacks. These cells became one of the most important tools in medicine and have been used in the development of the polio vaccine, in gene mapping, cloning, cancer research, and researching the effects of zero gravity and radiation on the human body.

The Immortal Life of Henrietta Lacks is a real page turner of a book and quite fascinating generally.
Rebecca Skloot is a journalist, which partly explains the readability of her book, and also the style in which she writes the story. To me this was both positive and negative. Positive, in that the scientific concepts were explained well enough for a lay person to understand and in a narrative style; negative, where the author injected certain incidents, such as the abuse of Henrietta's children by family members after she died, and other intimate family details, throughout the book.
I wondered whether this was really necessary, but an important aspect of this book is the recognition that behind all the science and research, there are real people. The author certainly portrayed this well.

I'm not American, so I didn't come to this book with any personal background experience of USA race relationships or much knowledge of the history and implications of segregation, therefore my reactions to this book are as an outsider looking in.
I had the impression at times that the culture of Henrietta Lacks' cells and the subsequent profits derived from their use (that the family never benefited from) was blamed for everything that went wrong with the Lacks family afterwards, but there was some serious dysfunction in the family before Henrietta ever went to hospital.
It was tragic that five young children lost their mother, but she had fairly advanced cervical cancer by the time she presented to John Hopkins' Hospital, and the treatment of cervical cancer wasn't clear cut at the time. She had the standard treatment of the time: radium and X-ray therapy. (See my comments on Cancer Ward, set in the 1950's.)
The author reveals scientific research that went beyond the bounds of decency, although not in Henrietta's case: research using cancer cells perpetrated upon unsuspecting black patients (see the infamous Tuskegee Study) that were likened to the Nazi experiments of WWII. Prison inmates were used as human guinea pigs, and the conditions of the 'Negro' mental institution where Henrietta's eldest girl was sent before her mother died were disgusting. Were other mental institutions at the time any better? I don't know.

There were also privacy concerns raised by the family. Henrietta's medical records were released without their consent, and blood was taken from various family members for research purposes without full disclosure. In fact, the family had no idea what was happening.

Henrietta's family were uneducated and ignorant of science so when they found out that her cells were 'alive' it was very confusing for them and this misunderstanding caused them a lot of unnecessary anguish. They thought that parts of her were still alive and that she could feel pain when experiments were performed on her cells.
The family also wondered, if Henrietta had been so important to medicine and scientists were buying her cells, why couldn't the family afford health insurance?
This is one of those areas where science leapt ahead before the ethics had been worked out. And this still happens.
The author included a very informative afterword that addresses tissue research and patient rights at the time the book was first printed in 2009, and gives examples of other individuals who took action against medical practitioners who profited by the sale of their patients tissues.
Fascinating!
Cell research is vital. It needs to be done ethically and in an informed manner, but what a huge can of worms we've opened up!

Henrietta Lacks was an uneducated woman from an impoverished background and like most black patients at the time, she only went to hospital when she thought had no other choice. As I mentioned above, there had been some very unethical research conducted at the Tuskegee Institute, and other incidents, that generated suspicion of the medical profession amongst black communities.

Many doctors back then used public patients for research, generally without their knowledge - these patients were being treated for free so it was considered fair enough to use them as research subjects.

In the 1950's "benevolent deception" was commonly practiced and so it was not uncommon for patients to have no idea of their diagnosis, especially if it was something as distressing as cancer. This was also the practice in the USSR in the book I mentioned above.

Henrietta was not told that her cells were replicating themselves in a laboratory and her family only found out inadvertently about twenty years later. By this time HeLa cells were a huge business and were sold and sent all over the world.

When the family realised that people were making money out of their mother's cells, they became angry, especially when they couldn't even afford medical insurance.

At the time this book went to press, blood samples and body bits taken during procedures such as removal of moles, ovaries, appendices, and tonsils - which are given voluntarily - are often kept indefinitely and later used to develop things like vaccines and drugs and no permission is required.

Rebecca Skloot first heard about HeLa cells when she was sixteen and doing a community college biology class. She spent a decade researching Henrietta's background including time spent getting to know Deborah Lacks, Henrietta's daughter, who helped provide much of the information for the book.

The documentary below, The Way of all Flesh was filmed in 1998 and is a very interesting account of the science behind the HeLa cells:

I read somewhere that a version for younger readers was published in 2012: The Immortal Life of Henrietta Lacks: The Young Reader's Edition by Gregory Mone, Rebecca Skloot, 256 Pages, Published in 2012, but it looks like it's out of print.

Wow! I'm just stunned to read about this . . . I don't know how I never knew this information, nor why I didn't know it, but I thank you for this book review.

I'm not sure I can handle reading the actual book right now--I'm not emotionally capable of sorting through the horrors that you've explained--but I'll be thinking and preparing myself to read it.

I'm glad to read this, because I have this book and I intend reading it!

Great commentary on this book.

I remember when this book was first published I heard an interview with the author. It sounds fascinating.

Among the interesting sounding things are the medical ethical issues. I had no idea that biological specimens are still used without permission.

I had heard about this book for some time but have never been motivated to read it. Your review was really excellent and gave a balanced report, I feel. I bet the scientific parts would be worth reading, although I'm always leery of the "sociological" aspect because I don't know what might be the author's bias or what other factors there might be that are perhaps excluded to lead the reader to a certain conclusion.

For instance, if the research was conducted at Tuskeegee Institute, then were the researchers black? That is a historically black University.

I'd be very interested to see what you think of it, Silvia.

The scientific parts were very well done. I thought the author spent a bit too much time on the family, & researchers were both black & white: https://www.cdc.gov/tuskegee/faq.htm

Brian, the exploration of medical ethics were a high point for me & in spite of their convoluted nature, I thought the author explained things well for the average layperson.

Actually this explains it in more detail: http://www.todayifoundout.com/index.php/2014/04/true-story-behind-appalling-tuskegee-syphilis-experiment/

I'd never heard about the HeLa cells before either or the legalities behind cell/tissue research. You'd probably enjoy the documentary I added below as it doesn't go into the family details found in the book.

Thank you for this insightful review. The book is on my to-read list, but not quite yet. Mental institutions in general were horrible places during this time, and 'care' for the mentally ill was often shockingly cruel, as I discovered when skimming Whitaker's book Mad in America.

It astonishes me how anyone can say that people are basically good; perhaps that is only possible if one avoids reading about such unpleasant issues and about how easily 'good' people embrace evil ideas and actions.

Thanks, Annie. There's also the view that educational ignorance is equated to moral depravity. Give someone enough education & that will remedy their morals. There are plenty of very well-educated deviates, I'm sure.

A thoughtful review!
I enjoyed this book even though the content is challenging on many levels.
The ethics relating to our bodies and their treatment is fraught with complexity even today.
A new movie based on the book has recently been released.
Margaret

I'd really like to read more books on the ethical side of medicine. If you know of any, let me know :)

I had heard about this book and couldn't understand why a book about cell experimentation seemed so popular. Thank you for fleshing it out and conveying some of the issues involved. I understand its appeal more now.

I wish there were more books that make these science topics more accessible to the average person.

The Immortal Life of Henrietta Lacks could have been the amazing story of how a poor black woman's cells are used to combat, cancer, HIV , HPV, polio, and many more. And it is, a mother of five goes to John's Hopkins for a mass in her abdomen, a particularly aggressive form of cervical cancer, likely caused from HPV or other STD's she caught from her philandering husband. it's the casual way the medical community used (and profited from) cells samples from patients. In a world before informed consent, indeed before ethical testing laws, a young, pretty, vivacious woman deals with the culture of non disclosure to patients. A world where the doctor's word is sacrosanct. As a nurse I found this fascinating, people are much more protected now.