My Family and Other Animals by Gerald Durrell (1956) 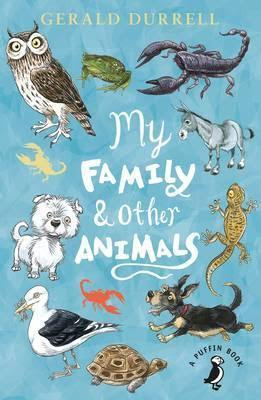 Gerald Durrell, (1925-1995) a pioneering naturalist, conservationist, and author, was born in India in 1925, the youngest of four children. Both his parents were of British descent but were also born in India, and having a limited experience of England, considered India to be their true home.
When Gerald was three years of age, his father died of a cerebral haemorrhage and his mother took the family and moved to England.
My Family and Other Animals is Gerald's account of his family's five year stay on the Greek island of Corfu.  He was ten years of age at the time, his eldest brother Larry was twenty-three; Lesley, nineteen, and Margo, eighteen.
From an early age Gerald possessed an ardent interest in the natural world and was obsessed with animals and all sorts of living creatures. During his time on Corfu he made a special study of zoology and kept a large number of various creatures as pets, much to the disgust and dismay of some of the other members of the family. My Family and Other Animals is one of the numerous books he wrote about his animal adventures and various exploits, but it is also a highly entertaining portrayal of his family and how they interacted. We enjoyed spending some time with the Durrell family as I read this book aloud although some editing was required for my 12 year old as we went.
We had a good laugh at his description of his mother's bathing costume which one of her sons said looked like 'a badly skinned whale,' and which inflated like a balloon when she went into the water...'an airship of frills and tucks.'

Mother was vague and incredibly mild for all she had to endure and tended to be dominated by her eldest son, Larry, a writer. It was he who decided the family needed to leave the miserable English climate and head for the Continent:

...Larry was designed by Providence to go through life like a small, blond firework, exploding ideas in other people's minds, and then curling up with cat-like unctuousness and refusing to take any blame for the consequences. He had become increasingly irritable as the afternoon wore on. At length, glancing moodily round the room, he decided to attack Mother, as being the obvious cause of the trouble.
'Why do we stand this bloody climate?' he asked suddenly, making a gesture towards the rain-distorted window. 'Look at it! And if it comes to that, look at us...Margo swollen up like a plate of scarlet porridge...Leslie wandering around with fourteen fathoms of cotton wool in each ear...Gerry sounds as though he's had a cleft palate from birth...And look at you: you're looking more decrepit and hag-ridden every day.'
Mother peered over the top of a large volume entitled Easy Recipes from Rajputana.
'Indeed I'm not,' she said indignantly.
'You are,' Larry insisted; 'you're beginning to look like an Irish washerwoman...and your family looks like a series of illustrations from a medical encyclopedia.'

Life sounded pretty idyllic for Gerry, and his naturalist bent had plenty of scope with scorpions, toads, snakes, various birds, bats, butterflies, geckos, sea creatures, tortoises and porpoises making their appearance during his stay on the island.  His education was conducted at home by various interesting & eccentric tutors. One of them, Peter, was more interested in Gerald's sister, Margo, than in his young charge, but I thought this description of the tutor's own education on the island was delightful:

'With the summer came Peter to tutor me, a tall, handsome young man, fresh from Oxford, with decided ideas on education which I found rather trying to begin with. But gradually the atmosphere of the island worked its way insidiously under his skin, and he relaxed and became quite human. At first the lessons were painful to an extreme: interminable wrestling with fractions and percentages, geological strata and warm currents, nouns, verbs, and adverbs. But, as the sunshine worked its magic on Peter, the fractions and percentages no longer seemed to him an overwhelmingly important part of life and they were gradually pushed more and more into the background; he discovered that the intricacies of geological strata and the effects of warm currents could be explained much more easily while swinmming along the coast, while the simplest way of teaching me English was to allow me to write something each day which he would correct.'

Durrell had a way with similes. These are a few that took our fancy:

'The plane, like a cumbersome overweight goose, flew over the olive-groves, sinking lower and lower.'

'...the three dogs hung out their pink tongues and panted like ancient, miniature railway engines.'


'The Magenpies had been through the room as thoroughly as any Secret Service agent searching for missing plans. Piles of manuscript and typing paper lay scattered about the floor like drifts of autumn leaves...The Magenpies could never resist paper. The typewriter stood stolidly on the table, looking like a disembowelled horse in a bull ring...'

'Then came Mother, wearing an enormous straw hat, which made her look like an animated mushroom...'

'They squatted there like two obese, leprous Buddhas, peering at me and gulping in the guilty way that toads have.'

One day, Mr Kralefsky, one of Gerald's tutors, informed Mother that he had taught Gerald as much as he was able and the time had come for him to go somewhere like England or Switzerland to finish his education:

'In desperation I argued against any such idea; I said I liked being half-educated; you were so much more surprised at everything when you were ignorant.'

Mother was adamant and so the family returned to England with the words of a border official, 'One travelling Circus and Staff' written on their 'Desription of Passengers' document.

Linking to Back to the Classics 2017, Classic about an Animal and The Classics Club

Brian Joseph said…
Over the years I have heard good thinks about this book. It sounds very good.

Years ago I read a lot of a fair number of personal accounts of the natural world. I should do so again. Durrell would be a good place to start.
22 July 2017 at 10:38

Carol said…
Hi Brian, it would be interesting to hear what you think if you did get to read any of his books & whether the British humour would transfer well to American culture.
22 July 2017 at 12:18

Michele Morin said…
What a delightful sounding book! Thanks for sharing it here. This author sounds like a true artist and wit!
22 July 2017 at 22:32

Joseph said…
I don't read a lot of non-fiction of this sort...but this sounds charming. Probably much better than my choice in this category Ugh!
22 July 2017 at 22:51

Gently Mad said…
I thought you had already reviewed this book. I'm sure I bought the book based on your blog posting. Never mind. I enjoyed reading the book. Good review!
26 July 2017 at 01:31

Carol said…
Sharon, I did mention that I was reading it aloud & that we were enjoying it but hadn't written a more detailed review. I think it gained something by being read aloud, too. 🙂
26 July 2017 at 08:31