I caught him, with an unseen hook and an invisible line which is long enough to let him wander to the ends of the world, and still to bring him back with a twitch upon the thread.

The Queer Feet (The Innocence of Father Brown) by G.K. Chesterton

Brideshead Revisited was written during 1943 and 1944 while the author was recovering from a parachuting injury and was published in 1945. Most of the story takes place in the 1920's and 30's and its theme was 'the operation of divine grace on a group of diverse but closely connected characters.' It is also a nostalgic look at a vanishing world.
In the 1959 preface to the book Waugh writes:

I wrote with a zest that was quite strange to me and also with impatience to get back to the war. It was a bleak period of present deprivation and threatening disaster - the period of soya beans and Basic English - and in consequence the book is infused with a kind of gluttony, for food and wine, for the splendours of the recent past, and for rhetorical and ornamental language, which now with a full stomach I find distasteful.

The story is told in the voice of the main character, Charles Ryder, a lonely Oxford student. He meets the flamboyant and decadent Sebastian Flyte under unpropitious circumstances - Flyte appears at the ground floor window of Ryder's living quarters after a drinking session and vomits into the room!
The two young men develop a close friendship and Charles is invited to Sebastian's opulent family home at Bridehead where he begins to develop an infatuation with its residents, their lifestyles, and ultimately, Julia, Sebastian's aloof sister.

I thought it was a strange book in some ways. I read most of it on the plane flights we took on our holidays but it wasn't until I started going back over the passages I had underlined and let them percolate, that I could actually say that it was a worthwhile read. I didn't think so at first and wondered why on earth it would be considered a classic.

Waugh converted to Catholicism in 1930 and Brideshead Revisited shows obvious signs of his new-found faith. He wove in the theme of the G.K. Chesterton quote above but overall I don't think he made a very convincing apologetic.
Sebastian is the second son of the Marquis of Marchmain, who is estranged from his wife. Lady Marchmain is a devout Catholic, as is her eldest son, but the rest of the family are ambivalent about their beliefs. Over the course of time the 'twitch of the thread' is felt by the various characters and we are privy to how this plays out in their lives.

The Awakening Conscience by Holman Hunt, 1853 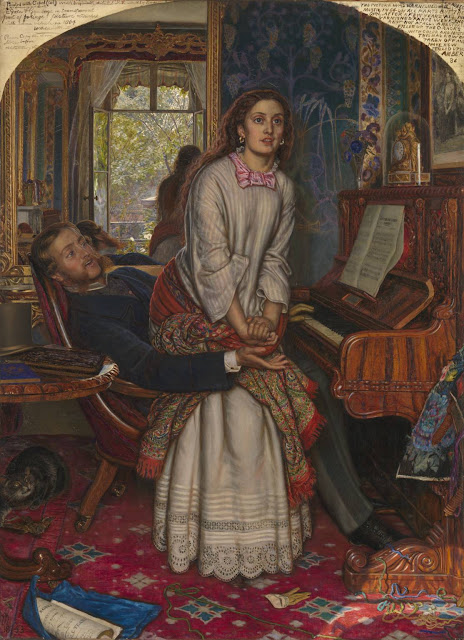 There are some beautifully written and perceptive passages...

Here my last love died.
...as I lay in that dark hour, I was aghast to realize that something within me, long sickening, had quietly died, and felt as a husband might feel, who, in the fourth year of his marriage, suddenly knew that he had no longer any desire, or tenderness, or esteem, for a once-beloved wife; no pleasure in her company, no wish to please, no curiosity about anything she might ever do or say or think; no hope of setting things right, no self-reproach for the disaster. I knew it all, the whole drab compass of marital delusion; we had been through it together, the Army and I, from the first importunate courtship until now, when nothing remained to us except the chill bonds of law and duty and custom.

The trouble with modern education is you never know how ignorant people are. With anyone over fifty you can be fairly confident what's been taught and what's been left out. But these young people have such an intelligent, knowledgeable surface, and then the crust suddenly breaks and you look down into the depths of confusion you didn't know existed.

The Effects of Modern Education:

Hooper had no illusions about the Army - or rather no special illusions distinguishable from the general, enveloping fog from which he observed the universe. He had come to it reluctantly, under compulsion, after he had made every feeble effort in his power to obtain deferment. He accepted it, he said, 'like the measles.' Hooper was no romantic. He had not as a child ridden with Rupert's horse or sat among the camp firs at Xanthus-side; at the age when my eyes were dry to all save poetry...Hooper had wept often, but never for Henry's speech on St. Crispin's day, nor for the epitaph at Thermopylae. The history they taught him had few battles in it but, instead, a profusion of detail about humane legislation and recent industrial change...
Though himself a man to whom one could not confidently entrust the simplest duty, he had an over-mastering regard for efficiency...

The passage below reminded me of C.S. Lewis's perceptive observation, 'men without chests,' in The Abolition of Man:

'You know Father Mowbray hit on the truth about Rex at once, that it took me a year of marriage to see. He simply wasn't a complete human being at all. He was a tiny bit of one, unnaturally developed; something in a bottle, an organ kept alive in a laboratory. I thought he was a sort of primitive savage, but he was something absolutely modern and up-to-date that only this ghastly age could produce. A tiny bit of a man pretending he was whole...'

On the will to live:

I said to the doctor, who was with us daily: 'He's got a wonderful will to live, hasn't he?'
'Would you put it like that? I should say a great fear of death.'
'Is there a difference?'
'Oh dear, yes. He doesn't derive any strength  from his fear, you know. It's wearing him out.'
Next to death, perhaps because they are like death, he feared darkness and loneliness...

I mentioned that I thought the book was strange in some ways. This was partly due to Waugh's represention of the Faith he'd embraced and partly the protagonist's personality. He went from being quite compassionate and sensitive and became a complete jerk.
Prior to his conversion, Waugh's writing was admired for its irony but in later years his writing took on a more serious tone. An article written in 1954, when the author was still living - Evelyn Waugh: The Best and the Worst, has some interesting and perhaps harsh observations on the man, which helped me understand my reactions:

Complete rejection of the modern world is the source from which springs the best and the worst in Evelyn Waugh's writings. The artist who repudiates the realities of his time must of necessity either work in the ironic key, as Waugh did in his earlier novels which transmute repudiation into blandly destructive laughter; or if dissatisfied with a negative criticism, he must offer alternatives to the status quo which can be taken seriously. But when he seriously articulates his opinions and attitudes, the results are often distressing, and sometimes disastrous.

...in the Catholic content of his novels to date, there has been little accent on religious experience as such and a really shocking absence of that human compassion which is so much a part of the Catholic spirit.

The religious writer requires at least four qualities of which Waugh has so far displayed only one. Faith he has; but little compassion and no humility -- and in his entire work there is not a single truly convincing trace of love. 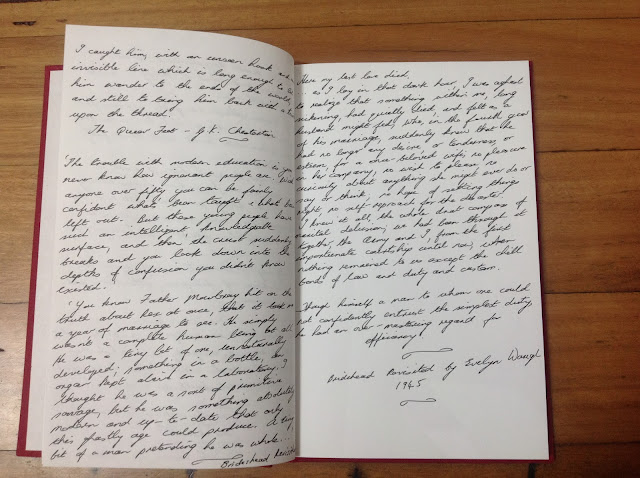 I was going to read one of the author's other books, Decline & Fall, (his first published novel) for the 20th Century category in the Back to the Classics Challenge but instead I'm entering Brideshead. Maybe I'll get to read it later on; it would be interesting to compare the two.

The book is set in Oxford, England, for the most part, so I'm entering it in the European Reading  Challenge at Rose City Reader.


Brideshead Revisited is a Literature selection for the second term of Ambleside Online Year 11.

at March 10, 2016
Email ThisBlogThis!Share to TwitterShare to FacebookShare to Pinterest
Labels: 20th Century, 50 Classics in 5 Years, Ambleside Year 11, Back to the Classic 2016, Literature, The Classics Club

This is a favorite book of many of my (also Catholic) friends. I haven't read it, but I have watched the older film (not the new one from a few years ago), and I wasn't impressed enough to read the book. In fact, I thought it was really rather odd, as you said. But I will say that the film stayed with me, and I still think about it even now. The quotes you shared have my interest re-piqued. One of these days. I actually have Waugh's Edmund Campion on my list to read first. :)

AO has the book as a literature selection in Year 11 but I can't imagine my ds making much sense out of it. I think I'd prefer to leave it for an adult reader. Waugh said some very perceptive things but I thought the storyline tended to obscure his insights.

Like Waugh, in his early books Aldous Huxley's writing was filled with irony but as he grew older he lost his taste for satire and wrote about reforming the world. I know this sounds terribly middle-aged, but I found the older I got the less I liked scorn and ridicule in novels. I read someplace that people didn't like to the first one to leave Waugh's dinner parties because they knew once they left, Waugh would start stabbing them in the back. Being a nice guy has little to do with being a great writer. See Maugham's Moon & Sixpence.

Learning about an author's background is sometimes surprising. George Eliot's books, for example, are so un-indicative of what she believed and how she herself lived. I just finished my first Maugham book - The Painted Veil, which I wasn't expecting to like, but really did.