Mary Grant Bruce is mostly known as the author of the Billabong books but she also wrote a number of other books. Golden Fiddles is one of these and is a stand alone book that tells the story of the Balfour family - Mr and Mrs Balfour and their four children, Kitty, Norman, Elsa and Bob - who are trying to eek out an existence on a farm in Tupurra, a fictitious town in country Victoria. Although the family barely makes ends meet, they live happily enough, although Mr. Balfour is taciturn and pre-occupied with their lack of finances. His attitude creates resentment in his older children and as the story begins we see this tension playing out in the family. 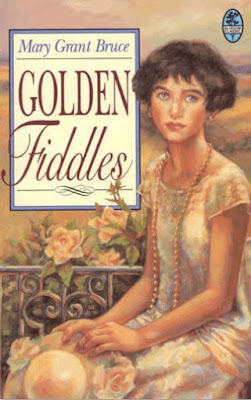 'I wouldn't mind being poor,' (Kitty) said. 'There aren't any rich people about here. But I'd like to be poor cheerfully - not to fuss and worry all the time, as Father does, and always making the worst of things. Why, he looks as if the world were coming to an end when any of us want new boots, till it makes one ashamed of having feet!'

...Father's hard to work for, Mother. A bit of praise doesn't cost anything, but he doesn't give that either. I suppose he has got so used to being economical that it affects his tongue! Norman won't stand it for ever, you know: when he gets a bit older he'll go away, and then Father will find out that he has lost a jolly good helper.

Kitty talks to her mother about leaving home eventually to become a chef...

'I want money, and I'm going to get it with the only talent I've got.'

'Well, Father has brought us up to think it is. And it does make the wheels go round, Mother. I want to be independent, and I want to see something beyond a hill farm in Gippsland...'

The family looked forward to one day in the year which loomed above all others: 'Show Day.' The whole family gloried in the occasion and entered the various competitions. This year each of the Balfour children won prizes in the different events. Bob was overjoyed when his pony won first prize in the ring and once at home he talked excitedly about entering the jumping event in next year's show.
Mr Balfour, however, dropped a bombshell by announcing he had sold Bob's beloved pony. Jim Craig had offered to buy the pony for more than it was worth after seeing him perform at the Show. It was an offer too good to refuse. Now Bob had to watch someone else ride his pony to school and put up with the chaffing and ridicule from his schoolmates as he rode double behind Elsa on her old nag.

He knew what he had to face at school; that ordeal could not be dodged. But no one watched him leave home, except his father; and Walter Balfour, seeing, from his work in the paddocks, the sad little trio go down the track, bit hard on his pipe stem and muttered curses on ill-luck and poverty. The thought of Jim Craig's cheque burned in his soul. He was by nature neither cruel nor hard, and he loved his children and was proud of them. But care and worry had made a crust over his heart.

A week of misery followed for everyone. Bob was sullen and had three fights at school resulting in a magnificent black eye. Norman didn't whistle as he went off to milk the cows. Mealtimes were unusually quiet and tense.
One hot evening they sat on the veranda after tea. Mrs Balfour opened a letter that had come earlier in the day and as she read, she grew white and began to tremble.
Her Scrooge of an uncle had died and left her eighty thousand pounds!

Through numerous circumstances and mishaps, the family learns that money doesn't buy happiness; that they all need some sort of work, not the gruelling type they had before, but something worthwhile that they can put their hands to. They also learn to appreciate each other as a family and to understand their father.

They talked of Tupurra and the old days. Time had drawn a veil over the hardships and the dullness of that long-ago life; looking back they seemed to remember many good things.

'All the same, it was a hard life,' Kitty said, at length. 'And yet, we were pretty happy, even if we used to grumble because we were so poor. The queer thing is that I believe we were happier then than we are now, when we've got everything we ever longed for. But that's ridiculous if course.'

'I don't know,' Elsa said slowly. 'Some things were better then. For one thing, I don't remember more than about three times that we ever quarrelled.'

Golden Fiddles is an enjoyable story with just the right level of realism for a reader of around 11 years of age and up. As it was written in 1928, the word N***er is used in places. In this story it's the name of Bob's pony, so it crops up quite a bit whenever the horse in mentioned. The only other occurrence is in a comment Elsa makes: 'Father works like a n***er in the garden...'

I wrote some thoughts on literature and its associated language when I talked about the Billabong series by the same author. I think C.S. Lewis's words below are helpful in this situation, and although a book written in 1928 is not old in the sense that Lewis was speaking about, it does reflect a way of thinking or an outlook which is quite different from the present.

Every age has its own outlook. It is specially good at seeing certain truths and specially liable to make certain mistakes. We all, therefore, need the books that will correct the characteristic mistakes of our own period. And that means the old books. All contemporary writers share to some extent the contemporary outlook - even those, like myself, who seem most opposed to it.

Authors such as Mary Grant Bruce (1878-1958) lived through the class conflict of the 1880's in Australia and the great worker's strikes, the First World War, and the lead up to the Great Depression, before she wrote Golden Fiddles. I couldn't begin to imagine what she lived through - incredible change, loss and upheaval but I am willing to overlook her mistakes in order to benefit from her truths. The discomfort that these older books sometimes generate opens our eyes and minds. Some of our best discussions at home have come via the avenue of literature when we've been faced with these uncomfortable ideas and attitudes. As I've often mentioned when writing about books, I often edit as I read aloud, depending on the child's age and/or maturity, or use the opportunity to discuss attitudes etc. when appropriate. It's easier for me to do this now than it was years ago as I've learnt the importance of preparing my children for a world that's often uncomfortable.


Linking this to Simple Pastimes as part of the Classic Children's Literature Event 2016.

amanda @ simplerpastimes said…
I've never heard of this, but it does sound like quite an interesting story. And it sometimes seems that more people need to learn the lessons it sounds like this book imparts.
1 May 2016 at 06:56

Belinda Letchford said…
This is one of my favourite stories. It was nice to have a little recap - might have to go and get familiar all over again!
4 May 2016 at 11:09

Tina at Mommynificent.com said…
I'm so excited at these Aussie stories you are sharing the last few weeks! The timing is so perfect as we are currently studying Australia and New Zealand in our homeschool! Thanks so much for sharing this at Booknificent Thursday this week!
Tina
5 May 2016 at 23:15