Patricia St John has been called 'a poet of forgiveness,' and you don't have to  look any further than the wonderful stories she wrote for young children to understand why. Tanglewood's Secret (1948), Treasures of the Snow (1950), Star of Light (1953) and Rainbow Garden (1960), are just a few of the powerful, engrossing and redemptive books she wrote for children.
I came across them a couple of years after we were married and were visiting my husband's grandparents in New Zealand. I found a few of the author's books in the home library they kept for children's ministry and sat up until the wee hours of quite a few mornings, often in tears, in order to finish them. Patricia St John's books were often based on her own experiences; she knew what redemption was and had the gift to be able to express God's love and forgiveness creatively.
In 1982, the author moved into a more mature readership with the publication of Nothing Else Matters (also published under the title, If You Love Me: A Story of Forgiveness). 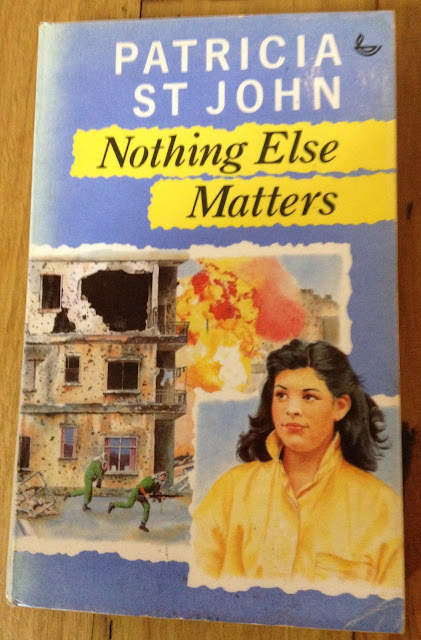 This story is set in Lebanon in the mid 1970's during the civil war. After the State of Israel was established, refugee camps were set up by the United Nations as the conflict with the Palestinians spilled over the border into Lebanon. The Palestinian Liberation Organisation grew out of these camps and this resulted in the establishment of military training centres.
There was a brief civil war in 1958, and then in 1975, war broke out again between the Maronite Christians (a strong 'right wing' political party) and the Muslim militia and Palestinians, or 'left wing.'
Nothing Else Matters is the story of a Lebanese Maronite family; Elias, Rosa and their children: 16 year old twins Amin and Lamia; eleven-year old Sami and eight year old Huda. Rosa has a simple and sincere faith but the rest of the family are only nominal Christians. As the life they know disintegrates around them, and hatred rises up in its place, Lamia's struggles with the horrors of the war bring her to a place where she begins to grasp that forgiveness and love are the most important things. Nothing else matters, ultimately.
The story is written in the author's usual simple but powerful style so the reading level isn't difficult,  but the themes are. I know every family feels differently about age appropriateness so here are a few samples from the book that may help you judge whether it's suitable for your situation:

Lamia finds a dead Palestinian woman with her infant lying unhurt beside her underneath her cloak. Taking the child, Moomi, home, Rosa immediately accepts him, but when Elias comes home he is enraged:

'The child of our enemies, and your brother not three weeks dead. I tell you, I will not have this brat in our house.'
'Father, we have lost one brother; let us keep this one.'
His taut nerves gave way and his anger blazed out.
'So! this little bastard can take he place of our brother, can it? You have forgotten him already...be silent, you fool of a girl, or I'll throw him out now, thus minute!'
The church stood like a grey rock jutting from the mountainside, but she did not go in. She had never been in since Amin died, because the pale Christ on the cross, and his mournful faced mother with her eyes uplifted had not answered her prayer any more than any of her bits of wood and plaster. 'I think I'm an atheist now,' she thought rather vaguely, and her deep sense of loneliness increased because it was so terrible to believe that there was no one there at all.

So many of the children had run out of their homes to play and had never come home again.

After an all night bombardment, Elias realised there was no hope for their survival if they stayed in their home. He said to Rosa,

'If there's a lull, we might still get away, unless the car has been stolen or smashed. It was well hidden.'
'Yes, if there is a lull I think we should try and get away in the dark. It's Lamia I worry about the most. She is so beautiful, and they do terrible things to girls.'
'It's not only the girls; you, too, are beautiful. But don't worry. If they come to rape you or Lamia, I shall shoot you both with my own gun, before they shoot me.'
And Lamia, woken by the strangeness of a five minute silence, heard what her father said, and lay marvelling. He would shoot her himself, rather than see her raped or mutilated, and die content, with her. Her silent father had always cared for her and provided for her, but now she knew, for the first time, how deeply he loved her. For love is a strange plant. It may grow unnoticed and unrecognised on the sunny slopes and only break into flower in the valley of the shadow of death.

Writing about an attack by the Palestinians which became known as the 'Battle of the Hotels,' the author wrote:

When it was over, the victors posed for photographs round the headless body of one of their victims, while other bodies were hitched to jeeps and dragged through the streets to celebrate the victory.

In 1978, Patricia St John travelled to Beirut to visit her sister, Hazel, a missionary and teacher who had survived the first three years of the civil war. Hazel had broken her femur in a fall and Patricia spent five weeks with her during her convalescence. Once back home in England, Patricia wrote Nothing Else Matters which was based on the true experiences of a Lebanese family who lived with Hazel after losing their home and belongings in the war.
(See 'Patricia St. John Tells Her Own Story,' 1995).

I read all of her children's books as a child. I have had her biography of her father on my wishlist for a while now. But I didn't know about the story you write about here. The movie version of Treasures of the Snow is one of my favorite family movies.

Her books don't appear to very well known in the USA, which surprised me. I wonder if she is better known in Canada?? The bio of her father would be very interesting - the whole family were quite amazing!

I love this author she shares her faith so well in the stories she has written.
I have An Ordinary Woman's Extraordinary Faith... her autobiography.

Hi Margaret, it looks like the book you have is the same as 'Patricia St.John Tells Her Own Story,' which is the autobiography I have. It's confusing when books are published under different titles.

I have never heard of her. Thanks for introducing me and adding to my stack. A few are at my library. Love blooming in the valley of the shadow of death is a beautiful picture.

I didn't know she ever wrote for an older audience. Fascinating! Thanks for sharing this at Booknificent Thursday on Mommynificent.com!
Tina