Far From the Madding Crowd by Thomas Hardy (1874) 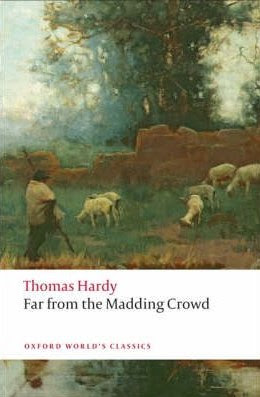 I was a little way into this book before I realised that I had confused authors. I knew the book had been written by Hardy, but as I was reading I was thinking 'George Eliot.' I read Adam Bede by Eliot last year and Far From the Madding Crowd has a very similar feel to it. One of the things that aided my confusion was the humour in the early section of the story. I've read Tess of the D'Urbervilles and didn't think Hardy had a sense of humour.

Far From the Madding Crowd begins with an almost lighthearted tone, especially in the first chapter (which is a delight) but becomes more pensive over the course of the story as Hardy explores the choices and passions of his characters.
Bathsheba Everdene was beautiful, independent and headstrong, and inclined to be impulsive and thoughtless. She had three suitors: a plain-speaking, hardworking but luckless farmer; a wealthy, mature bachelor; and a dashing, reckless soldier. Bathsheba's vanity and immaturity led her into making some careless decisions that resulted in consequences she never imagined nor intended.

'...I shouldn't mind being a bride at a wedding if I could be one without having a husband. But since a woman can't show off in that way by herself I shan't marry - at least yet.'

...she felt her impulses to be pleasanter guides than her discretion.

...some women only require an emergency to make them fit for one

He had lost all he possessed of worldly property: he had sunk from his modest elevation down to a lower ditch than that from which he had started; but he had now a dignified calm he had never before known and that indifference to fate which, though it often makes a villain of a man is the basis of his sublimity when it does not. And this the basement had been exaltation and the loss gain.

She resolved never again to look or by sign to interrupt the steady flow of this man's life. But a resolution to avoid an evil is seldom framed till the evil is so far advanced as to make avoidance impossible.

Never did a fragile tailless sentence convey a more perfect meaning. The careless sergeant smiled within himself, and probably the devil smiled too from a loophole in Tophet, for the moment was the turning-point of a career...the seed which was to lift the foundation had taken root in the chink...

'Ay, sure,' said his son, a young man about sixty-five, with a semi-bald head and one tooth in the left centre of his upper jaw, which made much of itself by standing prominent, like a milestone in a bank.

The maltster's lack of teeth appeared not to sensibly diminish his powers as a mill: he had been without them for so many years that toothlessness was felt to be a defect than hard gums an acquisition.

We learn that it is not the rays which bodies absorb, but those which they reject that give them the colours they are known by, and in the same way people are specialised by their dislikes and antagonisms whilst their goodwill is looked upon as no attribute at all.

Hardy's Wessex settings and his poetic style of writing are draw cards for me even though I've found some of his books rather bleak and sometimes fatalistic. Far From the Madding Crowd was a very enjoyable read and revealed another side to Hardy that I hadn't noticed in his other books.

Far From the Madding Crowd is my selection for a 19th Century Classic for the Back to the Classics Challenge 2016.

Ambleside Online has scheduled this book as a free read in Year 10.

at September 19, 2016
Email ThisBlogThis!Share to TwitterShare to FacebookShare to Pinterest
Labels: 50 Classics in 5 Years, Ambleside Year 10, Back to the Classic 2016, Books, Classics, Literature

I had never read Hardy until I read Tess of the d'Urbervilles within the past year. I found that book to be brilliant yet incredibly bleak. I agree that there was not much humor in that book.

I want to read more of his works. I will likely read this one next. I also agree that Hardy's style is so very poetic.

This is my favorite book by Hardy. The BBC put on a masterful production of it back in 1998. It is my very favorite and I've watched it several times. The actors, all of the them, do a brilliant job. The movie is carefully crafted all the way down to the finest detail.

I hope you enjoy the book as much as I do.

Tess was my first book by Hardy too then I read The Mayor of Casterbridge. Tess was always overcome by circumstances that were beyond her control but Henchard, the protagonist in M of C determined his own destiny by his double mindedness and violent temper. Hardy explored the idea 'character is fate' in this book and did it very well. FF the M Crowd is definitely my favourite so far.

I knew there was a movie made last year (which I haven't seen) but I love the BBC productions so I'll have a look for that. Thanks for sharing that! It's my Hardy favourite so far.

After I read this one, I really fell in love w/ Hardy's writing. (I also enjoyed Return of the Native too.) I've not read Eliot, yet, but that is encouraging about the feeling.

Have you seen the 2015 film version? That I love very much!!

I haven't seen the film. Sharon mentioned a BBC production above that also sounds good. Alan Rickman did an audio version of Return of the Native. I just found the first part here:
https://www.youtube.com/watch?v=VBvKULWMYxY - Wouldn't mind getting a hold of the complete audio; he has such a mellifluous voice.

Like the first commenter, I only know the Hardy of Tess of the d'Urbervilles, which is bleak, as you all describe it. Just by that book I'd thought him more similar to Hawthorn's Scarlett Letter than to Elliot, so this book (which I think all my reading friends on Internet read last year and this) has gone up my tbr pile for sure.

I think you'd love it, Silvia. It's very different to Tess but his writing is just so beautiful in both. I just didn't like the depressing fatalism of the former but couldn't help admiring his skill in writing, regardless.

Great review! This is the book that made me love Hardy -- I really enjoyed the movie and it helped me get over my fear of Hardy and read the book as well, then I followed it up with Return of the Native which is also good. It has a few lighthearted moments but it is darker than Far From the Madding Crowd.

Thanks Karen. I'll keep Return of the Native in mind.

Great review, Carol! I read that when Madding Crowd was first published in a magazine, it was anonymous and people assumed George Eliot was the author, so don’t feel bad you confused the authors! I found Bathsheba to be unlikable for most of the book because of her pride, vanity, impulsivity, and unwillingness to listen to sound reason from Oak, but she grew on me as she matured towards the end.

Hi Elena, so it wasn't just my imagination :) Thanks for the link to your review. You might have to make yourself a new list for the Classics Club at the rate you're going! I've hit a road block with my reviewing but I've been reading lots.