There are three outstanding heroes to be found in the novels of John Buchan. Richard Hannah is the most famous of them all and is the central figure in The Thirty-Nine Steps, Greenmantle, Mr. Standfast, The Three Hostages and The Island of Sheep - all fantastic stories well worth reading.
Sir Edward Leithen is another hero and apparently the narrator of John Macnab, one of Buchan's books I haven't yet read, but it comes highly recommended by a few of my kids.
The third outstanding figure in Buchan's novels is Dickson McCunn, the respectable, retired Glasgow grocer who is introduced in Huntingtower along with the Gorbals Diehards and they re-appear in Castle Gay and The House of the Four Winds.
The three McCunn books are best read in order as there are a number of references to events that happened in previous books. 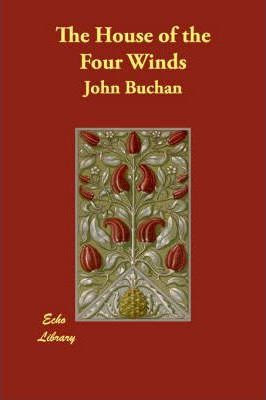 The House of the Four Winds is a little more fanciful and has a less serious tone than many of Buchan's other tales - our hero gets into the plot when someone appears at his upper window on the back of Aurunculeia the elephant, for example. The action is centred in the fictional country of Evallonia in Central Europe where the Republican Government of the country is in disarray and on the verge of revolution. Prince John, the rightful heir to the vacant throne, is in hiding and is regarded as a puppet by Juventus, the Nationalist movement made up mostly of Evallonian youth.
Complicating the situation is Mastrovin the Communist who is determined to get rid of Prince John in order to prevent the Monarchists taking government.

Great events, says the philosophic historian, spring only from great causes, though the immediate occasion may be small; but I think his law must have exceptions. If the not inconsiderable events which I am about to chronicle, the occasion was trivial, and I find it hard to detect the majestic agency behind them.

Trivial incidents introduce Dickson McCunn, Alison Westwater and John (Jaikie) Galt into the intrigues of Evallonia where great events are unfolding and where they each play an important role. The House of the Four Winds hasn't the depth of most of the Buchan novels I've read so far, but it is still a good story and I think Buchan's development of the character of Jaikie Galt, the true hero of this story, makes up for any lack in other areas.
Jaikie is introduced in Huntingtower as one of the Gorbals Diehards, a group of orphaned street boys roaming the slums of Glasgow, and since then Dickson had basically adopted him as his son and put him through Cambridge.


His future - what was he to do now that he was done with Cambridge? Alison - his need of her grew more desperate every day, but what could he offer her worthy if her acceptance?
Only his small dingy self, he concluded, with nothing to his credit except a second-class degree, some repute in Rugby football, and the slenderest of bank balances. It seemed the most preposterous affair of a moth and a star.

Jaikie is a courageous young man but he struggles with his identity at times. In earlier days he'd been humiliated by the formidable Mastrovin and again he finds himself subject to the man's malevolence and his own self-abasement:


The formidable eyebrows were drawn together, and the whole man became an incarnate menace. Jaikie, empty, headachy, sitting in his shabby clothes on the edge of the bed, felt very small and forlorn. He sometimes felt like that, and on such occasions he would have given all he possessed for another stone of weight and another two inches of height.
Once again he felt, sharp as a toothache, his extreme insignificance.

For a moment his heart failed him. Then his sense of feebleness changed into desperation. He knew that the lives of the other three depended on him, and the knowledge stung him into action. Never had he felt so small and feeble and insignificant, but never so determined.

As with Buchan's other books, there are some interesting philosophical comments scattered throughout that are a reflection of the post World War I era. The words below had a touch of G.K. Chesterton, me thinks - maybe it was the street lamps comment??

"...We are now in the midst of the retarded liquidation of the War. I do not mean debts and currencies and economic fabrics, but something much more vital - the thoughts of men. The democracies have lost confidence. So long as they believed in themselves they could make shift with constitutions and parliaments and dull republics. But once let them lose confidence, and they are like children in the dark, reaching out for the grasp of a strong hand. That way lies the dictator. It might be the monarch if we bred the right kind of king...
Also there is something more dangerous still, a stirring of youth, disappointed, aggrieved youth, which has never known the discipline of war. Imaginative and incalculable youth, which clamours for the moon and may not be content till it has damaged most of the street lamps."

John Buchan's books are in the Public Domain and are available for kindle here.


Linking to Back to the Classics 2017: A Classic with a Number in the Title.


at February 26, 2017
Email ThisBlogThis!Share to TwitterShare to FacebookShare to Pinterest
Labels: 20th Century, 50 Classics in 5 Years, Back to the Classics 2017, Literature, WWI

I've never heard of John Buchan before! Thank you for introducing me to a new author :).

You're welcome! His books are also great for readers in their teens.

Love books - thanks for sharing at Literacy Musing Mondays!