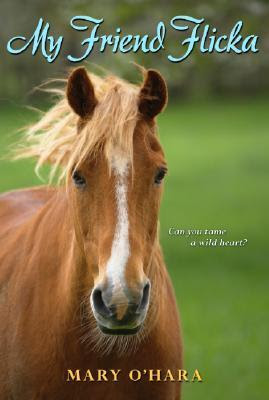 My Friend Flicka by Mary O'Hara has sat unread on our bookshelf for nearly twelve years since I first found it in a secondhand book store and recognised the title as being a Children's Classic, but not knowing much else about it. I decided to read it for the Children's Classic Literature Event this year as my 12 year old daughter loves horses and I thought I'd see if it was suitable for her.
I wasn't a horse fanatic when I was a child, but there's enough to enjoy in this book regardless of whether you like horses or not. The main thread of the narrative is the love a boy has for a filly (Flicka) and how that love is returned, but it's also a tender portrayal of family relationships - a stern ex-army father, a sensitive mother, and their two sons, Howard and Ken - and this added theme broadens its appeal even more.
Ken is a dreamy, scatterbrained, and irresponsible ten year old and his father just doesn't understand him at all. Ken always manages to get on the wrong side of his father while his older brother, Howard, is more like his Dad and has an easier time relating to him.

Ken felt as if he had been put out of the ranch, out of all the concerns that Howard was in on. And out of his father's heart - that was the worst. What he was always hoping for was to be friends with his father, and now this...His despair made him feel weak.

Ken desperately wants his father's approval and friendship but everything he does seems to drive them further apart. When Ken fails to be promoted to the next grade by his teacher his father is furious, but the only thing that will motivate Ken is having a colt of his own. And this his mother understands.
The story takes place in Wyoming in the USA and the author's vivid writing creates such a tangible sense of the countryside that it's easy for someone like myself, in a completely different part of the world, to imagine the setting. She also succeeds in depicting the various characters in a convincing manner - the four members of the McLaughlin family, the ranch workers, the horses and their individual characteristics, the itinerant family trying to eek out an existence - each are realistic and are heart-renderingly fleshed out by her descriptive powers.
I'm surprised that this book doesn't seem to be that well-known (well, in Australia at least) except for those who read it as a child themselves. It was made into a movie but a female character was substituted in Ken's place and from what I've read it didn't do the book justice. It certainly deserves its place amongst children's classics for its beautifully crafted writing and for the way the author portrays conflict in family life.
I think this book would be best suited for an independent reader of about 13 or 14 years and up, even though the main protagonist is 10 years old. Rob McLaughlin is a just man but has a quick temper, a rough tongue, and a harsh manner. "Damn it !" and sometimes "God damn it!" are part of his regular vocabulary and there is some tension between himself and his wife, Nell, that would better suit an older child. However, I think it would work well as a read aloud with a younger child with a little editing in places as there are some great themes worth exploring.

"The most affectionate animal in the world," said Rob. "You don't see the young ones leaving their mothers if they can help it. They stay in the family group. You'll often see a mare on the plains with a four-year-old colt, and a three-year-old, and a two, and a one, and a foal. All together. They don't break up unless something happens to make them. And they never forget."

"They learn from their mothers. They copy. They do everything their mothers do. That's why it's practically impossible to raise a good-tempered colt from a bad-tempered mate. That's why I never have any luck with the colts of the wild mares I get. The colts are corrupted from birth - just as wild as their mothers. You can't train it out of them."

McLaughlin never allowed anyone to show, or even to feel, any grief about the death of the animals. It was an unwritten law to take death as the animals take it, all in the day's work, something natural and not too important; forget it. Close as they were to the animals, making such friends of them, if they let themselves mourn them, there would be too much mourning. Death was all around them - they did not shed tears.

"...I maintain that it's not insane for a freedom-loving individual man or beast, to refuse to be subdued."

"My experience has been that the high-strung individual, the nervous, keyed-up type - is apt to be a fine performer. It's the solitary, or the queer fellow, that I'm afraid of. Show me a man who plays a lone hand - no natural gregariousness, you know - the lone wolf type - and I'll show you the one who's apt to be screwy."

"Flicka has been frightened. Only one thing will ever thoroughly overcome that, and that is, if she comes to trust you. Even so, some bad reactions of the fear may remain. This does not mean that you must not master her. You must. She will have many impulses that must be denied because you forbid the actions that rise from them..."

Some information on the author is here.


Linking to Simpler Pastimes for this month's Classic Children's Literature Event. Check it out for some wonderful literature! 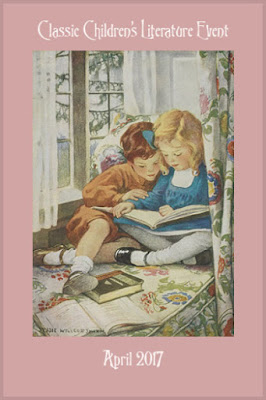 Great review, Carol. This book was a favourite of mine as a child. I need to read it again. So many of the quotes you included are great insights into life and I would have missed them as a child.

It's dangerous coming here... my reading or rereading list expands evermore:)
I loved these books as a young person too.
I am sure my mother's bookshelves diminish when you mention old favourites I feel the need to read again.
Lovely review!

Thanks, Cleo. There's definitely more to this book than a horse story. I loved that last sentence I quoted & thought how well it fits into parenting & home education: "She will have many impulses that must be denied because you forbid the actions that rise from them..."

The author of this blog takes no responsibility for any bookish actions taken by readers...
I understand, Margaret. It's infectious thing, this book talk.

HI Carol! I believe My Friend Flicka the movie was Elizabeth Taylor's first movie when she was fourteen.

I know what you mean about editing. I loved the James Harriot books as a teenager but when I decided to read them to my son I was rather surprised at all the editing I had to do. I did not remember those words being in there.

Yes! Love James Herriot but his books definitely need editing in places. Having children makes you more acute with things like this.

I know I read several horse stories as a child, but I don't believe this was ever one of them. At least, the plot doesn't sound at all familiar (though the title does--likely from a movie advertisement?). I may have to add it to my reading list though, as it sounds like quite a good story.

It is good, Amanda. Thanks for the organising Challenge :)