Something I don't often do these days is stay up late to finish a book, but the truth was, I couldn't put this one down. I fully intended to read just one more chapter, but I was hooked and had to finish it.
The Murder of Roger Ackroyd is a Hercules Poirot novel. I wasn't all that enamoured with the two previous Poirot stories I read and so I've leaned towards Christie's Tommy & Tuppence series and others that don't include either Poirot (or Miss Marple for that matter.) However, this book changed my mind on Poirot. I loved it and was not surprised to read that Christie's career took a decided turn for the better after it was published. 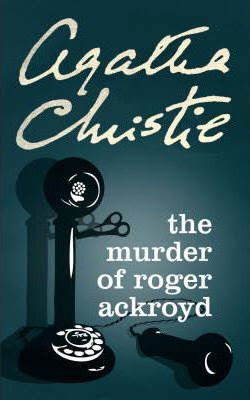 Dr James Sheppard, a middle-aged bachelor lives with his older sister Caroline in a small English village and is the narrator of this story. He is a self-deprecating, logical sort of fellow, while Caroline is a self-appointed amateur sleuth and an inveterate gossip:


The motto of the mongoose family, so Mr Kipling tells us, is: 'Go and find out.' If Caroline ever adopts a crest, I should certainly suggest a mongoose rampant. One might omit the first part of the motto. Caroline can do any amount of finding out by sitting placidly at home. I don't know how she manages it, but there it is. I suspect that the servants and the tradesmen constitute her Intelligence Corps. When she goes out, it is not to gather information, but to spread it. At that, too, she is amazingly expert.

Their interactions were some of my favourite parts of the book:

Caroline pushed her spectacles up and looked at me.
'You seem very grumpy, James. It must be your liver. A blue pill, I think, tonight.'
To see me in my own home, you would never imagine that I was a doctor of medicine. Caroline does the home prescribing both for herself and me.
Hercule Poirot, a private detective, had moved into the village about a year before, ostensibly to retire from active work. He is the Sheppard's neighbour, but they believed he was a hairdresser because of his two immense moustaches. His identity only became known to them when Flora Ackroyd, the dead man's niece, asks Poirot's assistance in solving her uncle's murder. Suspicion is upon everyone and Dr Sheppard finds himself closely involved in the investigation as Poirot's unofficial assistant: 'I played Watson to his Sherlock.'


'Mark my words, James, you'll see that I'm right...Roger Ackroyd might easily have been poisoned in his food that night.'
I laughed out loud.
'Nonsense,' I cried. 'He was stabbed in the neck. You know that as well as I do.'
'After death, James,' said Caroline, 'to make a false clue.'
'My good woman,' I said, 'I examined the body, and I know what I'm talking about...'
Caroline merely continued to look omniscient, which so annoyed me that I went on:
'Perhaps you will tell me, if I have a medical degree or if I have not?'
'You have the medical degree, I dare say, James - at least, I mean I know you have. But you've no imagination whatever.'
'Having endowed you with a treble portion, there was none left over for me,' I said drily.

In an obtuse sort of way, this book reminded me of Rebecca by Daphne du Maurier. It's bears no resemblance really, but rather it was the narrative device that both Christie and du Maurier used that made me think of them having a similarity.

Warning! Don't read the link below until you've finished the book!

This article explains the source of the idea which Agatha Christie based this book upon.

'The truth, however ugly in itself, is always curious and beautiful to the seeker after it...'

Linking up with Back to the Classics 2017: A Classic by a Woman Author and The Classics Club

at April 06, 2017
Email ThisBlogThis!Share to TwitterShare to FacebookShare to Pinterest
Labels: 50 Classics in 5 Years, Agatha Christie, Back to the Classics 2017, Books, Crime Fiction, Mother Culture

I have a real soft spot for Christie. I prefer Poirot and Miss Marple over her more spy/thriller books like those that feature Tommy and Tuppence.

I don’t know if you have ever read or heard of Susan Howatch’s books? But her first in her Starbrigde Series, Glittering Images, makes great use of this Christie title. It was a real “aha” moment for me when I read it.

I've heard of Susan Howatch but haven't read her books. I'll see if I can find that title at the library. Do you have a favourite Christie you could recommend??

For technical virtuosity, Murder on the Orient Express is possibly her best mystery. But probably, if I had to pick a favorite, it would be one of the Miss Marples...maybe The Mirror Crack'd or A Pocket Full of Rye.

I've been wondering which Agatha Christie novel to read next; I'm slowly working my way through them. I really enjoy her writing. But she was so prolific it's sometimes hard to choose. But after reading your review, I think I'll go with The Murder of Roger Ackroyd. Thanks! :D

It's so good that a author you enjoy has been a prolific writer! It isn't always the case, unfortunately.

I'm putting this book on my TBR list NOW!

I'm a latecomer to Agatha Christie & have mostly stuck with Dorothy Sayers but I'm beginning to understand why Christie is said to be the best-selling novelist of all time. I don't think she has the depth of someone like Sayers but I'm enjoying her writing nonetheless.