What Some Days in a Girl's Year 7 Week Look Like

Any time I've attempted to set down what we do in a day I've tried to write things up as we do them. I started off quite well most days this week but then got sidetracked. We're using AmblesideOnline Year 7 with some modifications. (I posted this year's plans here). This is what I managed to record of the week:

Wonder of wonders, I woke up about 7am and went for a walk - the first time I've done this in about two or three weeks.

8am - woke up Moozle (Monday is not her favourite day.) Breakfast and some morning jobs.
We started lessons about 9am:

* Picture Study (John Constable)
* Literature (Watership Down, which she reads herself)
* Devotions, memory work, I read a poem or two
* Read Aloud: The Gift of Music - listened to a piece by Corelli and then Vivaldi - Moozle draws while I read. She's using Draw 50 Buildings & Other Structures as part of her Architecture studies: 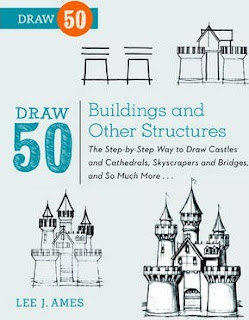 At about 12.15pm we go to cello lessons. She has an hour and a half's lesson and practices about an hour or more a day as she's preparing for an exam in late October. We use the time in the car to listen to our folksong, hymn & French song.

2.30pm - We had lunch & did our own individual reading. I checked emails, put on some washing, hung some out & brought some in...

When she finished lunch she continued her work - this week she did Geography.
We don't do maths on a Monday or much written work.

I started making dinner around and 4pm Moozle went outside to build "Queen Eleanor's bower," and after dinner she went to ballet. After doing Highland Dancing for many years we had to stop lessons when her teacher changed her hours so since the middle of last year she's been doing ballet, which she also loves. I listened to this Circe podcast while I was making dinner; it was very good:

"On Cultivating Wise Movie-watchers" - When to let kids make their own decisions about movies, why the MPAA ratings aren't useful guidelines, why the philosophies in films are often more important to avoid than things like s*x, violence, and language, movies and filmmakers that will help students learn to watch wisely, & much more.

I managed to fit a walk in again.

* French (watched half of the video for the week's lesson)
* Read Ivanhoe
* Cello Practice
* Ten Fingers for God - devotional reading on her own
* Devotions, memory work, Plutarch

* Churchill's Birth of Britain - reads this herself. This is her written narration from the book: 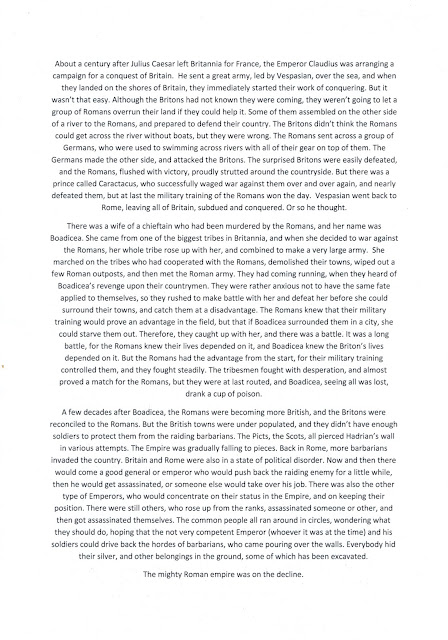 * Swimming in the afternoon - we do this in rain, hail & shine, all year - unless there's an electrical storm.

* Maths in the evening after dinner

Wednesday & Thursday - I forgot to write down what we did but it would have included science readings & notebook, French, Latin, Maths, Cello, History, Century Chart, Copywork.
We did a lesson on similes from The Grammar of Poetry and discussed some notable examples from 'My Family & Other Animals.' 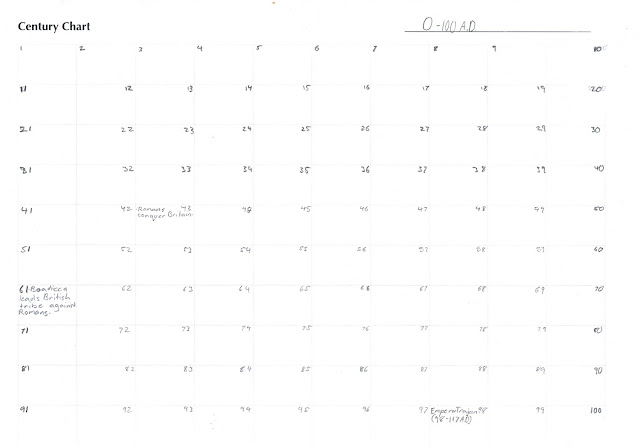 Today was the first day of spring here in Australia . We have a tradition of going for a walk on this day to check out what signs of spring we can see so we headed off at 8am. 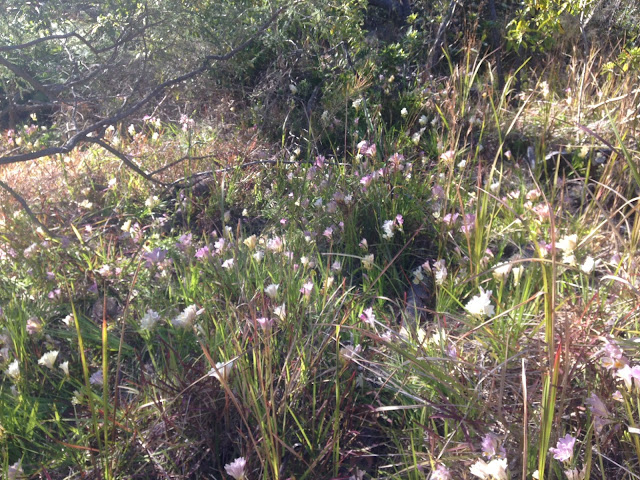 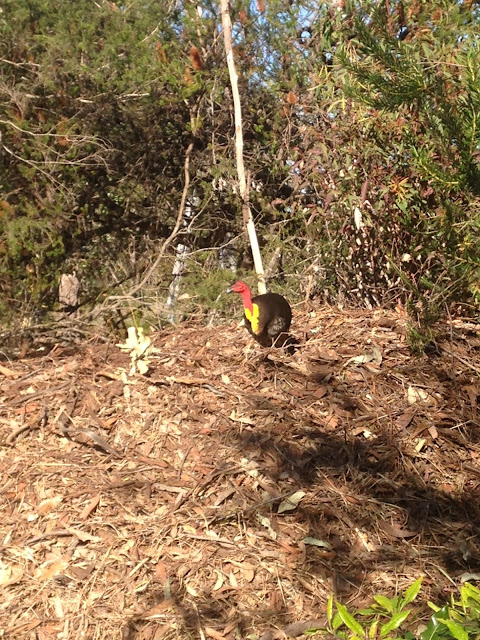 Moozle did Copywork, French, and a Literature reading. Oral narration followed, then we both got out our nature notebooks and listened to Vivaldi while we did our entries. Moozle wrote down the 'firsts' of the season and then tried out some crayons & watercolour: 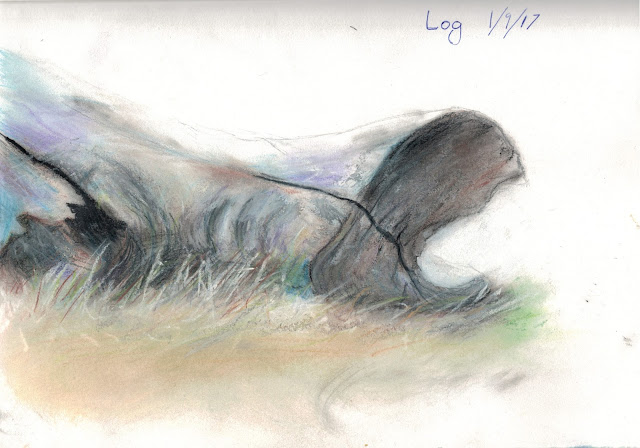 This was my attempt at drawing the brush turkey & a freesia... 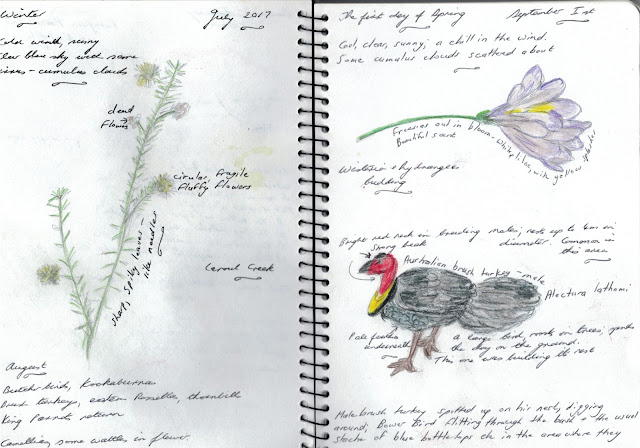 Benj has Fridays off from university and teaches swimming in the morning. After lunch all three of us went to an appointment which took about an hour and then we returned home.

* Reading on her own & then oral narration afterwards
* We took turns reading a section of Beowulf aloud
* Cello practice
* I read The Wonder Book of Chemistry aloud while she continued her work on "Queen Eleanor's  bower." 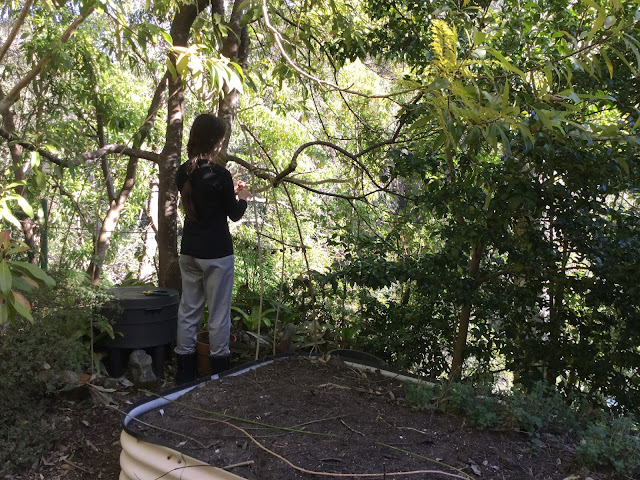 The boys took Dad out for dinner & a football game tonight for an early Father's Day gift so Moozle & I watched Ann of Green Gables, the Sequel, together.
In one of the scenes Ann told her class to open up The Oxford Book of Verse, a book we're using this year, and when Marilla & Mrs Lynde were having tea together we noticed that the tea set they were using looked just like ours: 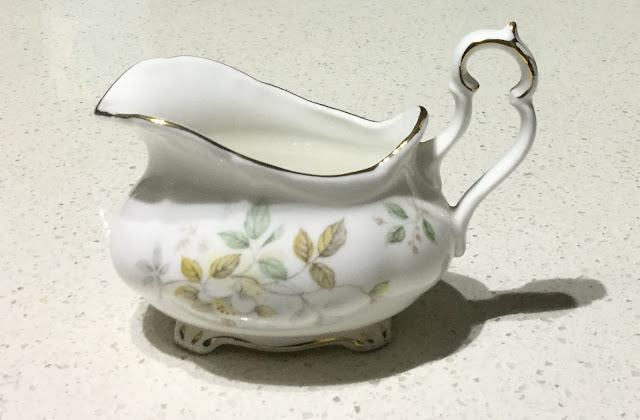 Five weeks into AO year 7 and I'm still juggling our schedule. Cello and musicianship take up quite a bit of time and they're high priority at present which means that some other areas are getting squeezed out or slowed down. That has happened in the past with my older ones as they all studied an instrument.
I don't regret the time spent in nurturing the arts. I've observed that the discipline of music study and the appreciation of beauty that comes with spending time with great art has extended into all areas of our children's lives. It has paid rich dividends later on as adults, not to mention the pleasure they gain and give by being proficient with their instruments.

Linking up with Weekly Wrap-up,  Keeping Company and Finishing Strong.

Amy Marie said…
I love this type of post, Carol. :) I enjoyed the statue of Boadicea near Big Ben in London last year, lovely narration by your daughter! Fascinating history. We love those draw 50 books and I don't have that castle one! Your turkey is SO colorful! Ours are much more neutral, earthy colors. :)
1 September 2017 at 23:08

Carol said…
These aren't edible turkeys, at least they're protected, & apparently they don't taste great.your England trip would have been a fantastic opportunity to see some of the history you've been immersing yourself in over the years.
2 September 2017 at 15:17

NancyElin said…
...Oh, what busy days you have with home-schooling!
Just curious, but does your daughter have a cell phone?
So much time is spent using that device with 'young people here'.

Carol said…
No Nancy, she doesn't. The older ones were about 16-18 when they got one -usually coincided with them starting to drive or travelling by train regularly.
2 September 2017 at 22:36

Gently Mad said…
This is a great schedule. I am currently visiting my sister and her family in Colorado and they have just begun a classical education with their five year old. It has been a lot of fun to watch them as they study. I also visited with them during the one day a week group at a local church where they go through the week's curriculum together.

Carol said…
Some Aussie stats: https://kids.ownfone.com.au/percentage-of-children-with-cell-phones#.WavAONGuahA
91% of 14-17 yr olds have mobiles (94% of those have a smart phone)
http://www.roymorgan.com/findings/6929-australian-teenagers-and-their-mobile-phones-june-2016-201608220922
I can understand parents giving their kids a phone if they're travelling on trains, especially in a place like Sydney, but I don't understand why it has to be an iPhone with all the extras.
3 September 2017 at 18:47

Aflyonmyhomeschoolwall said…
Moozle is a good writer. Her narration is well-stated! Such lovely days . . . and Happy Spring to you!!!
4 September 2017 at 21:43

Celeste said…
I don't have the Castle one either! Definitely going to check that out, especially as we begin a little architecture unit next term. Gianna isn't much interested in drawing buildings yet -- she almost exlusively draws people -- and I'd like to widen her horizons a bit. ;) She loves books like these, so I think it will be just the ticket!

Karen said…
I always enjoy being able to see how others' days go with AO. :) Thanks for sharing! I think I've seen that drawing book at one of our local bookstores. What a great thing to add to AO Year 7! My daughter is Year 4 this year so we have a couple of years to go before Year 7. But I want to make a note of that drawing book for when the time comes!

Carol said…
Moozle drew people for years but was always frustrated with her attempts. It's been good for her to branch out a bit, mostly with nature drawing, but also now with architecture & she was very keen for me to get the drawing buildings book when I showed it to her.
8 September 2017 at 20:24

Melissa said…
I love this post Carol...thanks for sharing! It's one thing to make a plan and show it, but another to show how it's being implemented/tweaked. I appreciate the practicality or application side. We're only on our second week of AO7, but I can already see some things that need to be refined. Moozle's narration is wonderful as well :)
11 September 2017 at 21:32

Carol said…
Thanks, Melissa. The real test of our all our planning is when the rubber actually hits the road!
13 September 2017 at 11:03