Seven Little Australians by Ethel Turner is a beloved Australian children’s classic that was first published in 1894 and has never been out of print since. So it with some trepidation and ducking of the head that I am going to say that I was fairly underwhelmed when I finally got around to reading it. My three girls read it before me - they were about 9 years of age when they first read it. As far as I remember, they all liked it, although it didn’t appeal to them as much as some of the other Australian classics they read around the same age e.g. The Silver Brumby and Billabong books. 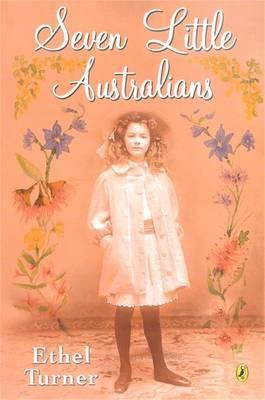 At one point the story reminded me of an incident in Louisa May Alcott’s Little Women, which was published twenty-five years earlier. Meg is the eldest daughter of the family in this book, as was Meg (Margaret) in Little Women. In both books ‘Meg’ is influenced by another girl to put on airs and act out of character and a young man is pivotal in both instances in helping 'Meg' see the foolishness of her behaviour.
My 12 year old re-read Seven Little Australians recently so I asked her if it reminded her of any other book she’d read. It hadn’t, and I mentioned that I thought in one part that it was similar to Little Women. Her reply was that ‘Seven Little Australians didn’t carry on about morals, unlike Little Women...'

If you imagine you are going to read of model children, with perhaps a naughtily inclined one to point a moral, you had better lay down the book immediately...
Not one of the seven is really good, for the very excellent reason that Australian children never are.

But my daughter also said that she hated the ending.
Which brings me to a couple of things I think was problematic with the story: the ending felt rushed and melodramatic, and the characters were never satisfyingly developed. I never felt I got to know anyone well enough and out of the two characters I thought had development potential, one is dispatched by the author before the story finishes.
However, the book is definitely worth reading and the writing itself is excellent and of literary quality, as you would expect of a classic that has never been out of print.

Linking up for the AusReading Challenge 2017 @ Brona's Books

I first read this in my early teens AFTER seeing the wonderful ABC tv series at the time. So I can never read the book without seeing and hearing the images and actors concerned, perhaps that helped to give me a much deeper sense of all the characters, that I read into the book every time since.

I love the sad ending which may sound a little weird, but touching death through much-loved characters in a book, helps to prepare one (a little) for when the real thing happens. As a child I was fascinated by the death and wanted to know the whys and wherefores. It's one of the few books that actually makes me cry - & it's not so much the death scene but the image of the ones left behind coping with their grief that brings me undone.

I was also fascinated by the scenes of early Sydney, esp when I realised that the area the family lived in, is now the modern day Lindfield area - right in the heart of the city, no longer on the outskirts, in the bush.

It's funny that you mention the Meg scene, because I also made the link to Little Women in my head last time I read it (about 15 years ago).

Yes the first time I read this book I was rather surprised and a bit horrified by the children’s behaviour and sibling relationships but now I enjoy the story for what it is. I do love the intro.

I’ve never seen the series and I knew before I read the book that it had a sad ending. I suppose it’s like any book, every reader relates to it differently. I usually get emotional about a book when it’s unexpected or something jumps out at me as I read. This has sometimes happened when I’ve been reading aloud to my kids and they have no idea why I’m blubbering. I wouldn’t mind watching that ABC series plus I noticed you had a link to a park named after the book. It’s not far from us so I’d like to go and visit,

Ha! Yes, they were pretty horrible but wasn’t their father just awful!