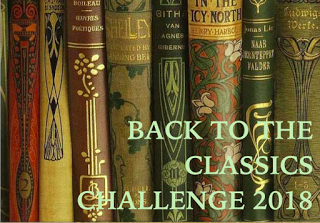 This is the fourth year in a row that I'm participating in the Back to the Classics Challenge hosted by Karen @ Books & Chocolate because I love reading old books and there are so many I keep discovering. I've listed some titles I'm thinking of reading, but as is usual I'll end up reading some and changing my mind about others, which is one of the appealing features of this challenge:

Stepping Heavenward by Elizabeth Prentiss (1869)
The Homemaker by Dorothy Canfield Fisher (1924)
...or a Josephine Tey title


4)  A classic in translation.

Michael Strogoff: The Courier of the Czar by Jules Verne (1876)
The Gulag Archipelago by Alexandr Solzhenitsyn (1958-1968)
...or The Makioka Sisters by Junichiro Tanisaki (1936)

7)  A classic travel or journey narrative, fiction or non-fiction.

8) A classic with a single-word title.

9) A classic with a color in the title.

The Black Tulip by Alexandr Dumas (1850)

The Rosemary Tree by Elizabeth Goudge (1956)
...or something by Leo Tolstoy

11) A classic that scares you.

Deal Me In Challenge

I've been umming & aahing over this one and finally decided to do a modified version (which is allowable). Deal Me In is a short story reading challenge I've thought of doing in previous years but this is the first year I've actually sat down & thought through what I wanted to include. There are speeches, poetry and essays I've wanted to include in my reading but never seem to get around to even though they don't require a lot of time. So my plan is to randomly choose a card from the deck once a fortnight, mostly using books I already have: Great Speeches, the Albatross Book of Verse, and a few others.
Some of my choices are from selections on the AmblesideOnline website for Years 10 & 11.
There are a few options on how to participate in this challenge but the basic idea is to choose 52 short stories (or in my case, 26) and assign each of them to playing cards. Each week (or fortnight, or month) you pick a card out from your deck and that will determine which short story, poem, essay etc you will read that week. Get all the details from Jay at Bibliophilopolus.

A  Introduction to Athanasius’ On The Incarnation - C.S. Lewis
2   Wislawa Szymborska
3   The Overcoat by Nikolai Gogol (1842)
4   The Rhyme of the Ancient Mariner - Samuel Taylor Coleridge
5   Christina Georgina Rossetti
6   Satan's Devices - George Whitefield
7   Czeslaw Milosz
8   Master of Many Trades - Robert Twigger, 2013
9   The Mark of the Christian by Francis Schaeffer
10  Everything That Rises Must Converge by Flannery O'Connor (1965)
J    The Memorable Hymn – Charles H. Spurgeon
Q   Sinners in the Hands of an Angry God – Jonathan Edwards
K   Edna Vincent Millay

A monthly book club - I participated in this a few years ago and hope to attend again this year. The list of books has yet to be chosen.

I've done my final update for the TBR challenge hosted by Adam: 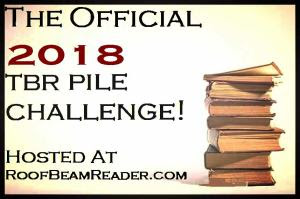 Brian Joseph said…
You are planning to read some great books Carol. There are so many great books out there. Happy reading in 2018 and Happy New Year's !
1 January 2018 at 17:41

Cleo said…
I've been tempted by these challenges, even if I have no time for them. I'll probably be posting my lists in the next few days. I think this year it will be good for me to have books listed to focus me. All the best to you and your family in 2018 and happy reading adventures, Carol!
1 January 2018 at 18:10

Ruthiella said…
These challenges are great! Very doable as they allow for flexibility but give some guidance.

I highly recommend you try Elizabeth Goudge's The Rosemary Tree. I think you will like it but in any case, I would be interested in hearing your opinion on it.

Ruth said…
Good for you. Many of these I am not familiar with, except Parents and Children (which I enjoyed), and #11 on your Back to the Classics. Anna Karenina and W&P were excellent, but daunting b/c of their sizes. I'm reading the LOTR series now, and I'm listening to a dramatized version of it while I read along. It is easy reading, but really scary -- we'll it's scary b/c of the music and sound affects.
2 January 2018 at 05:56

Erika said…
Oh, oh, oh, if LOTR scares you, you have GOT to do that. I have read the quartet (yes, it is absolutely worth starting with The Hobbit) years ago, and more recently I have listened to them on Audible. I usually prefer to read myself, if I am able, but babies and brain fog..... These are now my number 1 exception. I recommend listening to these, narrated by Rob Inglis, over reading them. Reading them it is far too tempting to skip over the poetry to find out what happens next. But Inglis brings it all to life, poetry, songs (beautiful melodies) and distinct voices for all the characters. Absolutely marvelous! I will re-listen to these regularly and look forward to the day I can start sharing them with my kids. I think cold days, cozy blankets, hot drinks, and quiet hand crafts will, ideally, be part of the tradition (is it a tradition if you’ve never done it? It is in my head....)
2 January 2018 at 10:11

Jay said…
I like how you're including speeches and essays in your Deal Me In reading. When I first started the challenge back in 2011, it was all short stories, then other participants began adding their own flair with poetry, plays, essays, and speeches and I love the variety now! Good luck with the challenge! -Jay
2 January 2018 at 23:58

Carol said…
Thanks, Cleo. I almost didn’t commit to any challenges this year but as you said, it does give you a focus & I like that, although I still like to read at whim and want to leave time for that also. Have a great year & all the best with your food blog.
3 January 2018 at 11:20

Carol said…
Ruthiella - I was going to read Goudge’s book last year. I have in the back of my mind that she is a bit too flowery for me but I’ve seen so many appreciative reviews of her books from people whose reading tastes I respect that I think I have to give her a chance.
3 January 2018 at 11:23

Carol said…
Hi Ruth, I’ve already read a few chapters of Parents & Children but I’d like to finish it. Yes, it’s the length of this books that has me hesitate. I wonder if the 3 books in the LOTR can be treated as separate books for the challenge?? I don’t know that I’ll get to finish all of them...
3 January 2018 at 11:26

Carol said…
Hi Erika, you know I haven’t even watched the movies, except for the Hobbit, as I wanted to read the books first. I read the Hobbit aloud to my dd last year & really enjoyed it.
As for traditions, you have them in your head & heart first...sounds lovely.
3 January 2018 at 11:30

Carol said…
Jay, thanks for the Deal Me In Challenge. It’s a great idea & a good way to remember to add those shorter works that are easy to forget unless you have a plan.
3 January 2018 at 11:32

Tarissa said…
Carol, thanks for visiting my blog yesterday. I was just stopping by to check out your blog, and I see we're a part of a couple of the same reading challenges this year.

Stepping Heavenward is a beautiful, excellent book! I've read that and Bleak House by Dickens (which is intriguing in it's own way). In your Back to the Classics potential list, those are the only two I've already read, although I'm interested in several others.... such as The Refugees by Conan Doyle. Oooh! I don't even know what this is, so I've got to jump on Goodreads now and find out. :)

Carol said…
Hi Tarissa, I've really enjoyed Conan Doyle's historical fiction. He has written some very diverse books but I was surprised to see that he'd written about the Huguenots in The Refugees, which i'm looking forward to reading.
11 January 2018 at 23:09