And There There Were None by Agatha Christie (1939)

'Ten little soldier boys went out to dine;
One choked his little self and then there were Nine...

One little soldier boy left all alone;
He went and hanged himself and then there were None.' 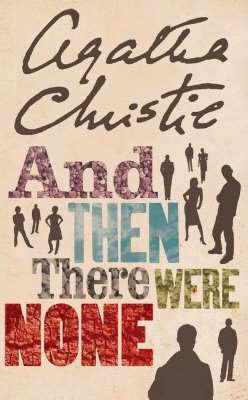 An old nursery rhyme forms the backdrop to Christie’s murder mystery, And Then There Were None.
Ten strangers, each with a secret in their past, receive invitations of various sorts to an isolated mansion on Soldier Island. Arrangements had been made by a person going by the name of ‘U. N. Owen,’ the new owner of the island, for the individuals to be picked up at a certain point and then transported via boat to the island.
The guests realise too late that there is no way off the island until the boat returns, if in fact it ever will, and one by one the invited guests are killed in mysterious ways. Those remaining try to figure out who the killer might be and they each view the others as their enemies.

Agatha Christie has been a mixed bag for me. I’ve loved some of her novels: The Murder of Roger Ackroyd, The Man in the Brown Suit, and The Secret Adversary were great reads but although the plot in the book I’ve just finished was clever and interesting, the characters were just awful. There was only one of the ‘Ten’ that I thought had any redeeming qualities; the others were plain old nasty and selfish. It was difficult to feel any sympathy for the cast of characters in this book. Give me Dorothy Sayers, Josephine Tey or even Margery Allingham instead of Agatha Christie anytime...well, at least until I read another of her books that changes my mind again.

I have never read Christie. My wife is a big fan of hers. I have heard others comment that some of the other classic mystery writers were better because of the characters. I need to devote some reading time and try a couple of novels including Christie as welll as some of the others.
17 January 2018 at 21:30

Aflyonmyhomeschoolwall said…
I'm a Christie fan, but I don't like mysteries in which there is so much murder that I can't relax into the sleuthing part of the story. I'm sure I've read this one, but it must have been long, long ago. I
17 January 2018 at 23:42

Becky said…
This is probably one of my least favorite Christie novels. I watched the recent adaptation of it--and I didn't really change my mind, I just learned that I'm the type of person who shouts at the TV.
18 January 2018 at 07:49

Carol said…
Ha! So it's not just me, Becky! Christie is so popular that I always feel a little worried about publishing my negative comments on her books!
18 January 2018 at 09:51

Carol said…
Hi Brian, I've read a reasonable amount of her work but nowhere near the number your wife has probably read but even in the books I've liked, many of her characters were rather forgettable.
18 January 2018 at 09:54

Carol said…
Anne, yes, this book just went from murder to murder. Not that there were too many gory details but she was just intent on bopping them all off that I got tired of it.
18 January 2018 at 09:55

Ruthiella said…
This was the first Agatha Christie title I ever read. I was maybe 12 at the time? I also re-read it a couple of years ago (of course, I had totally forgotten the solution!).

I love Christie, but you are correct, characterization isn't her strong suit. In fact, if you read a lot of her books, you will note certain character "prototypes" that she uses over and over. I think her real genius is in her plotting: to wit: of all her books and short stories that I have read, she only re-purposes a plot once or twice.

I love her books and find them easy and comfortable reads for when I am stressed and unhappy in particular. And they are short! I love the Peter Wimsey books too, but I can't read one of Sayer's titles as quickly.
19 January 2018 at 08:45

Sharon Wilfong said…
I couldn't have said it better myself. I love Tey and Sayers, Christie's characters can be odious. I do like Hercule Poirot, however. At least David Suchet's interpretation of the character. I find Suchet's Poirot a very likeable character.
19 January 2018 at 12:48

Carol said…
Ruthiella, good point - her plots are all very different. Dorothy Sayers isn't a quick read for me either and I like how her books focus on a particular theme like bell-ringing, mushroom poisoning, & advertising. I always feel I'm more educated after reading her books! I love Tey's characters so maybe it's just my preference to focus on 'who' rather than 'how,' 'what' or 'why.'
19 January 2018 at 20:20

Carol said…
Hi Sharon, I haven't seen any film versions of Christie's books although I was thinking of going to see Murder on the Orient Express. Most of the books I've read by Christie didn't have Poirot & I haven't read any with Miss Marple. So I'm probably not really qualified in my opinions just yet!
19 January 2018 at 20:23

Michele Morin said…
My youngest son and I are kind of hooked on Agatha Christie audio books, and this was the first one we read. Very creepy.
I'm so impressed with the way Christie can spin a mysterious tale, even about murder, without making it unnecessarily gory. Right now we're listening to Pale Horse.
8 February 2018 at 00:01

Carol said…
Isn’t it good to listen together! My youngest & I listened to some short stories by Anthony Trollope the other week when we were driving to various places. She’s still a bit young for Christie although she has read some of the Tommy & Tuppence books. I’d like to reread Murder on the Orient Express as I don’t really remember much about it.
8 February 2018 at 21:01

Fanda Classiclit said…
Hi Carol, my favorite from Christie is Curtain. If you like mystery with a plot twist, this one is for you, it might be Christie's biggest plot twist! But what I liked most is its psychological aspect.
17 September 2018 at 16:00