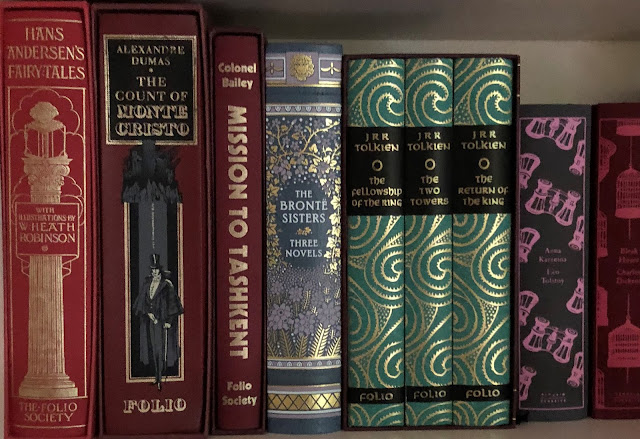 '...out of chance phrases and flashes of beauty (Michael) had always in old days been able to build for himself his country of escape. “Rest and ease, a convenient place, pleasant fields and groves, murmuring springs, and a sweet repose of mind.” Cervantes had known the same country, and had doubtless retained the power to create it even in the midst of misery, so great were his own interior riches.
But Michael’s imagination had always been dependent upon exterior bounty, and cut off from that he had been cut off from his country too.'

The Rosemary Tree by Elizabeth Goudge

Goudge’s character, Michael Stone, has an aura of mystery about him as well as a great affection for Don Quixote.
It’s been said that the inspiration for Miguel Cervantes’ character, Don Quixote, came to him while he was in prison and Michael believed that thinking of the great Cervantes and his suffering helped to keep him sane at times.
Cervantes had a great store of interior riches that he drew upon during his miserable and inhumane imprisonment by Ottoman pirates, whereas Michael was reliant upon external sources, and once they were removed, his imagination was unable to give him a place of rest; to take him to his country of escape. He did not have to power to create a sweet repose of mind, a pleasant place, because he had never made the effort to store up interior riches.

Last year I lost myself in one of the most inspirational autobiographies I’ve ever read: Life and Death in Shanghai by Nien Cheng, a woman, who in her early fifties, who was locked up in solitary confinement for six and a half years during the Cultural Revolution. During those years she drew upon her interior riches: Poetry and Psalms she had memorised; the intellectual culture of thinking and remembering she had practised throughout her life while she was still free; not to mention the physical disciplines she made herself undergo to keep her body from total deterioration while enduring the effects of starvation in prison.

Interior riches. We never know when we may be left without external resources to sustain our souls but what we have made a part of us can’t be taken away.


Mother Culture: filling my soul with Interior Riches for the present, and to draw upon in the future.

Brian Joseph said…
Fascinating and insightful post. The concept of "Interior riches" is interesting and I think there is much to it. I strive to have such things inside, but sometimes it is not as easy as it sounds. I would like to read both The Rosemary Tree and Life and Death in Shanghai.

Marian H said…
Thanks for the recommendation, I will check that biography out! I feel our whole culture now is to rely on each other for information and inspiration, and while that is a wonderful thing, unprecedented historically, it means I let myself remember less and less, because I can look it up online. This is a great challenge, to at least remember the things that we'd want most to have if we had nothing else.
5 February 2018 at 08:16

Silvia said…
Yes, m'am. I loved that part in The Rosemary Tree where she talked about Cervantes, so much that I went and read Don Quijote again, this time at my more mature age. I like your connection to Life and Death in Shanghai, another book I've read and that has left a mark and stayed with me. And yes, this reminds me so much of Paul, and all the saints who, in times of distress, had tucked Scriptures, hymns, and many of those internal riches, to help them overcome distress.
5 February 2018 at 14:34

Carol said…
Brian, I'm not very far into The Rosemary Tree but I really like what I've read so far. Nien Cheng's book is absolutely wonderful!
6 February 2018 at 11:26

Carol said…
Marian, that is so true! I was shocked recently when my 13 year old 'tested' me on some stuff I thought I'd memorised. I'd been repeating it over & over, some of it for months, & I realized I hadn't stored it, I'd just repeated the words without absorbing them. So demoralizing.
6 February 2018 at 11:28

Carol said…
Silvia, I thought of you when she mentioned Cervantes! Actually, you come to mind whenever I hear the word 'Spanish.' You've left your mark on me, my friend.
6 February 2018 at 11:33

Eva said…
I loved this post! I love the phrase interior riches. Now, as I am in my mid-fifites, I find it extremely difficult to lodge anything new in my brain that is not connected to something old, and I regret that I did not stow away more interior riches in my youth. Therefore, I am encouraging those who are younger and have more time ahead to put away these treasures that you list while their minds are fresh and they have opportunity.
7 February 2018 at 05:16

Carol said…
Thanks, Eva. I can remember just about anything I put to music but otherwise it's so hard. A couple of my children have photographic memories but they certainly didn't inherit that from me.
7 February 2018 at 15:38

Aflyonmyhomeschoolwall said…
I don't often think about "interior riches," but I realize in reading this that that is exactly what I do each day for my children and myself in our homeschooling. When the young ones sit in the car for too long while I shuttle older ones around, those littles draw upon their own interior riches and sing the beautiful hymns or recite the scriptures or poems we've memorized. Just this week one of my 6-year-olds was singing snatches of "O Come, O Come, Emmanuel" as he brushed his teeth; I just smiled, feeling so grateful that his mind was full of beauty now instead of the horrors with which he lived before he joined our family. I am grateful to think of my daily efforts at teaching as giving the gift of "interior riches."
7 February 2018 at 22:15

Carol said…
So good! And I think that filling their minds with true riches will over time help to erase some of the other memories or push them to a place where they’re not uppermost in their thoughts.
8 February 2018 at 21:12

Silvia said…
You've left your mark on me, my friend.

Sean Parker said…
All of these amazing books are totally stress killers.
meet and greet Gatwick