Mr. Standfast - How do I Love Thee? Let me Count the Ways...


This is the third time I’ve read Mr. Standfast by John Buchan. It’s one of my favourite books by this author and the third time around hasn’t diminished my ardour.
Mr. Standfast is the third book of five in Buchan’s Richard Hannay novels that began with The Thirty-Nine Steps, and was followed by Greenmantle. The book was published in 1919 after the Bolshevik Revolution and as World War I was coming to a close. Buchan’s story opens in 1917 when Hannay was serving as a Brigadier in France. He is recalled by British Intelligence to pose as a pacifist in order to infiltrate a spy ring that threatens to bring about an Allied defeat on the Western Front.
Hannay, an upfront man of action, is disgusted with the idea of being a fake pacifist, but he sees his duty, does what is required of him, and by the second half of the book he’s well and truly in on all the action, and nearly gets annihilated a couple of times.
There is a romantic element in this story as Hannay falls in love with the charming Mary Lamington, who is also working for British Intelligence. There are some tense moments for him when the sinister Graft von Schwabing, the German master of disguise, succeeds in tricking Mary. She walks into his trap and finds herself on the 'Underground Railway' heading into Germany with him. 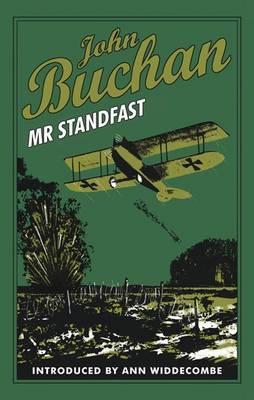 What I loved About Mr. Standfast

•    Buchan has a very literary style and perceptive insights into human nature. Add those qualities to his grasp of the historical setting and his ability to tell a thrilling political/spy adventure story and the result is a winner.

•    Buchan was a fellow Scot and I love his descriptions of the Scottish Highlands and its people. He also had a very full and interesting life, living in South Africa and later in Canada where he held the position of Governor General. This wide experience of life is reflected in his writing.

•    Buchan’s characters: Mr. Blenkiron, who starred in Greenmantle makes his appearance again in Mr. Standfast, this time as a healthy man cured of his chronic dyspepsia; Sir Archie Roylance, the light-hearted youth who previously served with Hannay and now is in the flying Corps, and Mary Lamington, the courageous and patriotic eighteen year old girl who wins Hannay‘s heart.

•    My favourite character in this book would have to be the wiry and wise, Peter Pienaar, an old associate of Hannay’s from South Africa who participated in some previous adventures. He had found his niche in the Flying Corps and gained a reputation for skill amongst his fellow flyers, but also from Lensch, the German aviation hero. Peter had been downed by Lensch in a air fight and at the beginning of this story he is a crippled prisoner of war. The Pilgrim’s Progress was his constant companion and he had singled out Mr. Standfast as his counterpart because he did not think he could emulate Mr. Valiant-for-Truth. How wrong he was!

Among the unopened letters was one from Peter, a very bulky one which I sat down to read at leisure. It was a curious epistle, far the longest he had ever written me, and its size made me understand his loneliness. He was still at his German prison-camp, but expecting every day to go to Switzerland...
Peter's letter was made up chiefly of reflection. He had always been a bit of a philosopher, and now, in his isolation, he had taken to thinking hard, and poured out the results to me on pages of thin paper in his clumsy handwriting. I could read between the lines that he was having a stiff fight with himself. He was trying to keep his courage going in face of the bitterest trial he could be called on to face - a crippled old age. He had always known a good deal about the Bible, and that and the Pilgrim's Progress were his chief aids in reflection. Both he took quite literally, as if they were newspaper reports of actual recent events.
Peter preferred Valiant-for-Truth to Mr Greatheart, I think, because of his superior truculence, for, being very gentle himself, he loved a bold speaker...He thought that he might with luck resemble Mr Standfast, for like him he had not much trouble in keeping wakeful, and was also as 'poor as a howler', and didn't care for women. He only hoped that he could imitate him in making a good end.

But the big courage is the cold-blooded kind, the kind that never lets go even when you're feeling empty inside, and your blood's thin, and there's no kind of fun or profit to be had, and the trouble's not over in an hour or two but lasts for months and years. One of the men here was speaking about that kind, and he called it 'Fortitude'. I reckon fortitude's the biggest thing a man can have—just to go on enduring when there's no guts or heart left in you.

Peter was writing for his own comfort, for fortitude was all that was left to him now. But his words came pretty straight to me, and I read them again and again, for I needed the lesson. Here was I losing heart just because I had failed in the first round and my pride had taken a knock. I felt honestly ashamed of myself, and that made me a far happier man.


Mr. Standfast by John Buchan is my choice for the Back to the Classics Challenge 2018: Re-read a favorite classic

John Buchan's Richard Hannay novels are scheduled as free reads in the AmblesideOnline Year 11 curriculum, but they are also great reading for around age 12 to 13 years and up. My kids loved them.

Labels: 50 Classics in 5 Years Ambleside Year 11 Back to the Classics 2018 Espionage

Brian Joseph said…
Great review of this book. A lot about the series sounds appealing, especially the main character. I have seen the Alfred Hitchcock version of The Thirty Nine Steps which I think is phenomenal.
6 February 2018 at 22:10

Sharon Wilfong said…
I tried reading 39 Steps but couldn't get into it, however, I saw a hilarious production of it at the University where I work. I did not know about his other books. Bases on your review, I may have to give this one a chance.

Paula Vince said…
I've never read any John Buchan, in spite of loving classics, but his books sound great :) It's fun to check out this category of the Back to the Classics challenge especially, just to see what bloggers consider their favourite.
7 February 2018 at 14:28

Carol said…
Brian, I've never seen the movie. Buchan was a great writer but reflected the times he lived in. If you were German & read his books you'd most likely get very offended, but he did quite a bit of writing in the middle of WW1 so his attitude is understandable.
7 February 2018 at 15:41

Carol said…
Hi Sharon, I like The 39 Steps the least out of all his books. But I still enjoyed it. Buchan wrote it during a bout of illness as a 'penny dreadful'for the son of a friend. His later books had more political/sociological commentary, which I really liked. I hope you give him another chance :)
7 February 2018 at 15:45

Carol said…
Hi Paula, thanks for your comment. I've really enjoyed the Back to the Classics Challenge & am constantly amazed at the number of great classic books I come across that I haven't heard of, let alone read!
7 February 2018 at 15:47

Ruthiella said…
Like every one else, I have heard of only The 39 Steps. Thanks for the great review, the book (and the series) sound fabulous. I will see if I can work one of his titles in on the next Back to the Classics Challenge.
8 February 2018 at 08:39

Carol said…
Hi Ruthiella, I think I’ll be reading another of his books for the challenge. He was a fairly prolific writer so there are quite a few to choose from.
8 February 2018 at 20:27

Carol said…
Yes! I have but it was a while ago & I’d like to reread it. I’ve read all the books in the Richard Hannay series & a few of his others. I think my next Buchan will be Sick Heart River which I’ve also read but it was a library book & I always rush through books I borrow. Do you have any favourites??
9 February 2018 at 08:58

Carol said…
Sharon, to answer your question - I was born in Scotland & emigrated to Australia when I was 8 yrs old. You can get the girl out of Scotland but you can't get Scotland out of the girl. I lost my accent when I moved away from home after years of trying to eradicate it to no effect. Now I'm sorry I didn't make the effort to keep it in my natural talking voice but I can turn it on at the drop of a hat.
9 February 2018 at 15:12

Jeannette said…
Tis is not genre I would gravitate to on my own, but your review is likely to bring many readers to this story, including, perhaps, me.
10 February 2018 at 05:02

Carol said…
It seems like he us mostly known for 39 Steps but his other books are so much more developed and not just centred on espionage. That genre isn’t one I generally gravitate to either but Mr Standfast is just a pleasure to read, especially if you are familiar with Pilgrim’s Progress.
10 February 2018 at 08:23

hopeinbrazil said…
I,too, loved the references to Pilgrim's Progress in this book. (I read it without having read the first two and probably would enjoy it even more if I had read them in their proper order.) Thanks for a great review!
11 February 2018 at 21:43

Carol said…
Hope, quite a few of the characters are introduced in the previous two books but Buchan really gets into his stride with Mr. Standfast so it’s nptobably a good one to start with for that reason.
12 February 2018 at 09:27

Major said…
I read Mr. Standfast when I was a wiseacre university student in the seventies. Despite my college kid posturing, the character Peter's being moved by Pilgrim's Progress inspired me to read Bunyon's classic. And the older I get, the more I realize fortitude is key, up there with prudence, wisdom, and smarts.
9 March 2018 at 02:05

Carol said…
I've always enjoyed Buchan's ability to portray character. I agree that these character qualities are crucial.
11 March 2018 at 17:59

Joseph said…
Wow...high praise. I've never read Buchan, but I have him coming up soon. Definitely looking forward to it now.
13 November 2018 at 07:25