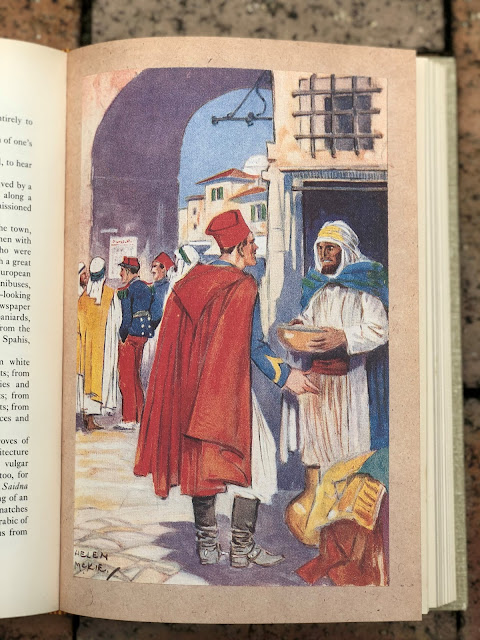 Beau Geste by P. C. Wren is an adventure story and a convoluted mystery set predominantly in the African Sahara. The story jumps into the first mystery immediately, but that turns out to be a distraction from the central mystery - the theft of a precious gemstone. The two mysteries are related but the connection doesn’t make sense until the end of the book and both mysteries are solved.
The main characters involved in the story are the three Geste brothers: Michael or ‘Beau,’ so named because of his ‘remarkable physical beauty, mental brilliance and general distinction;’ Digby his twin brother and John, their younger brother. Orphaned at an early age, they lived in England with their maternal aunt, Lady Brandon, and two other young relatives, Claudia and Isobel.

Poor Aunt Patricia! She had contracted an alliance with Sir Hector Brandon as one might contract a disease. The one alleviation of this particular affliction being its intermittence; for this monument of selfishness was generally anywhere but at home, he being a mighty hunter before the Lord (or the Devil) and usually in pursuit of prey, biped or quadruped, in distant places.

Lady Brandon owned a magnificent gemstone known as the ‘Blue Water’ and one evening it disappeared. The blame fell on Michael, her favourite. He admitted his guilt, but as thieving was so out of character for him, and he had no motive for the crime, each of his brothers ‘confessed’ to being the culprit.
The French Foreign Legion had captured the young men’s imaginations earlier and so it was to France that that all three individually made their way to join up to the legion. To their surprise, the three brothers discovered they had all tried to cover for each other when they met up when met up as  legionaries. Together they were stationed in Sidi Bel Abbès, Algeria, under the command of the sadistic Sergeant Lejaune:

To his admiring superiors he was invaluable; to his despairing subordinates he was unspeakable...
He would have made a splendid wild-beast tamer, for he had all the courage, strength, forceful personality, hardy over-bearing consciousness of superiority, and contemptuous, callous brutality required in that bold, ignoble profession.

There followed all manner of adventure, danger, moral darkness and tragedy, complicated when Lejaune somehow heard that Michael had stolen a precious gem and determined to get it from him.
Beau Geste is a terrific story of heroism, brotherly love, loyalty and faithfulness. Duty and doing what is right, regardless of the outcome, is an ever present theme, an unquestionable fact of life.
There are some gruesome aspects of desert fighting and Legion life in the tale but conversely, there are also nuggets of humour and brotherly banter throughout that add a carefree touch to the narrative.
This is no contrived morality tale, but a sensitive, triumphant story of unsung heroes and a noble gesture (i.e. beau geste).
An afterword in my copy of the book that was written by Brian Stableford summed up the author’s intentions in writing this book. I think he admirably achieved his purpose:

His constant obsession is with matters of decency, chivalry, altruism and heroism, and his constant lament is that in this cruel world these things are too often unobserved, unappreciated and unrewarded.

Beau Geste was written from the perspective of an Englishman in 1926, so there are cultural and racial biases that would probably be seen to be offensive by today's standards. The book is free online here if you want to peruse it.
P. C. Wren said that he enlisted himself in the French Foreign Legion using a pseudonym (as is the common practice) but the Legion authorities apparently disapproved of his portrayal of their system and deny his claim. However, his account of the daily life of a legionnaire is very vivid for someone who hadn’t spent time in its ranks.
As with many classics, this is a book that serves a broad age range. I thought it was a rivetting story  and my teenaged children enjoyed it around the age of about fourteen and up. It’s a splendid book for a young man with its emphasis on true heroism, the descriptions of life as a legionary and the humourous episodes early in the story which describe the antics of ‘Captain’ Michael’s ‘band’:

When a French cavalry officer on leave from Morocco visits their Aunt:

“Bags I we get him up to the schoolroom to-morrow,” whispered Michael...
Aunt Patricia lifted off the glass cover and handed the jewel to the Frenchman...
“That has caused we know not what of strife and sorrow and bloodshed,” he said. “What a tale it could tell!”
“Can you tell tales of strife and bloodshed, please?” asked Michael, and as Claudia said, “Why of course! He leads charges of Arab cavalry like Under Two Flags,” as though she had known him for years, we all begged him to tell us about his fighting, and he ranked second only to the “Blue Water” as a centre of attraction.
On the following afternoon, the Captain deputed Claudia to get the Frenchman to tell us some tales.
“Decoy yon handsome stranger to our lair,” quoth he. “I would wring his secrets from him.”
Nothing loth, Claudia exercised her fascinations upon him after lunch, and brought him to our camp in the Bower, a clearing in the woods near the house.

John’s description of his brother, Michael:

The Captain...was a very unusual person of irresistible charm, and his charm was enhanced, to me at any rate, by the fact that he was as enigmatic, incalculable, and incomprehensible as he was forceful. He was incurable romantic, and to this trait added the unexpected quality of a bull-dog tenacity. If Michael suddenly and quixotically did some ridiculously romantic thing, he did it thoroughly, and he stuck to it until it was done.

However, despite the youthful tone of some of the earlier passages, the story takes on a more serious tone story as it progresses with some of the characters downright evil, treacherous or cruel. 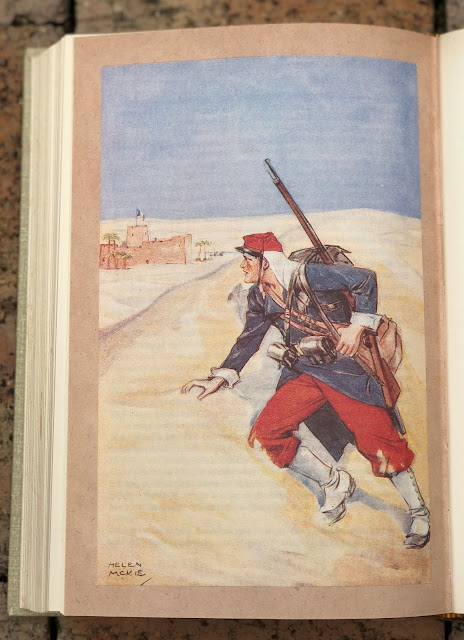 As Wren observed, altruism and heroism often go unobserved, unappreciated and unrewarded, and those who fight for what is right don’t always receive their reward in this life. A striking feature of Beau Geste is the contrast between the loyal and altruistic tendencies of a handful of characters and their ignoble, self-centred counterparts.
It helped me to read Beau Geste with a French dictionary close at hand as there are French words on just about every page in some sections of the book. Some of them are redundant or related to the military but the general gist can usually be worked out from the context.

Michael after he joins the Legion:

“Don’t bray like that, my good ass,” said Michael turning to him, “and try not to be a bigger fool than God meant you to...”

“It’s seems like we’ve all got to die, either way,” said Glock.
“It’s what I am trying to prevent, isn’t it, fat-head?” answered Michael.


Some interesting links on the french foreign legion which was established in 1831 during the reign of King Louis-Philippe and, yes, is still operating today.


Whatever Happened to the French foreign Legion?

The Mysterious Lure of the French Foreign Legion

If you want to enlist in the Legion!!


Linking to 2018 Back to the Classics: Beau Geste is my choice for a 20th Century Classic
and Carole's Books you Loved.


Labels: 50 Classics in 5 Years Back to the Classics 2018 Books for Boys Books for Teens Literature

Brian Joseph said…
Great review. The book sounds very entertaining and fun to read. I have seen the 1939 film version which I remember being a great classic film.
5 March 2018 at 08:30

Jeannette said…
But you didn;t run out and enlist, did you?

Carol said…
Thanks Brian. The book inspired a few films about the Legion from what I read but the movie version you mentioned is the one that gets mentioned the most. I haven’t seen it but I think it would be interesting to watch having read the book.
5 March 2018 at 09:07

Aflyonmyhomeschoolwall said…
I have a friend who is searching for good books about brothers that she can read aloud to her sons. Most of her boys are too young, but the oldest ones might be ready. Thanks for this review!
5 March 2018 at 23:34

Gently Mad said…
I read one Wren but I cant remember the title. It was adventurous and funny. Also a bit racist by today's standards. I think I downloaded Beau Geste onto my kindle.
6 March 2018 at 03:18

Carol said…
Anne, the relationship between the brothers was a highlight for me. It isn't something that's often portrayed well & realistically.
6 March 2018 at 12:25

Carol said…
Sharon, there were a few nationalities that didn't get a good rap: Italians, Jews, & Arabs mostly, had some generalisations made about them. I think the reason the French Foreign Legion wasn't that taken with Wren's account was due to negative stereotypes of officers, although all three brothers were impressed with other French officers that they met. Two Americans were almost caricatured but they were goodies & it was a boyish sort of portrayal. Overall, the comments were made flippantly or in passing and didn't appear to me to be out of hate but more just generalisations based on the behaviour of a few.
6 March 2018 at 12:37

Annie Kate said…
Sounds like a good book. Thanks for the review and recommendation. I haven't 'been' in the desert since various St Exupery books, and maybe it's a good time to go back for a visit.
8 March 2018 at 23:56

Carol said…
Funny you should mention St Exupery - I just fished out my copy of 'The Little Prince,' which i've never actually read as i thought it might be a good one to find in French for my daughter.
11 March 2018 at 18:02