Back to the Classics: Sick Heart River by John Buchan (1941) 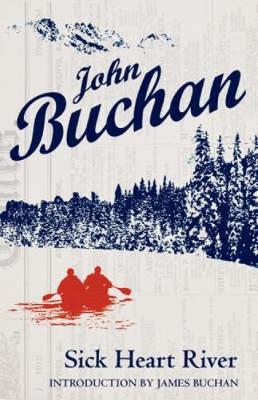 Sick Heart River was John Buchan’s last novel. He dictated the story to his long-serving secretary, Lilian Killick, who told his wife that the book was ‘odd,’ and ‘so unlike him, so introspective.’ It is a very philosophical book but it is also an adventure and a spiritual quest.
The main character is Sir Edward Leithen, a stoic bachelor, lawyer, and Member of Parliament, who appears in other Buchan books. He is a dying man, as was Buchan at the time this book was written. In fact, it was completed only days before he died.Buchan, who had been serving as Governor-General of Canada, and as such had journeyed all over Canada, embarked on a tour of the north in 1937.
From Edmonton he and his entourage took the train north for the journey by paddle steamer down the Athabasca River to Fort Chipewyan, where they passed into the Slave River. Then came the thousand-mile steamer journey to the Arctic Ocean, and thence to the Mackenzie Mountains and Aklavik; over the Great Bear Lake to Coronation Island where he met the assortment of people who would populate his last book.On his return journey by way of Alberta and British Columbia, he flew over the coastal range and saw the country that would be described so intimately in Sick Heart River. Due to his poor physical state, he didn’t experience an Arctic winter but borrowed from traveller accounts and conversations with his son who had spent time there.

Sir Edward Leithen is fifty-eight years of age and has been given only a year to live. He was to expect a progressive loss of strength until his heart failed. There was no hope. Faced with this prognosis, Leithen reflected on his life:

He had used most of the talents God had given him, but not all. He had never, except in the War, staked his body in the struggle, and yet that was the stake of most of humanity. Was it possible to meet that test of manhood with a failing body?

The test came when Mr. Blenkiron (an American character from Buchan’s Richard Hannay novels) approached him with a request to help find his niece’s husband, Francis Gaillard. Gaillard was a Frenchman originally from Quebec who had ‘snapped’ and disappeared into the north. A combination of detective, psychologist and sportsman was what was required and Blenkiron was convinced that Leithen was the man.


Leithen raised his sick eyes to the eager face before him, a face whose abounding vitality sharpened the sense of his own weakness.‘You’ve come a little late,’ he said slowly. ‘I’m going to tell you something...which nobody knows except myself and my doctor - and I want you to promise to keep it secret...I’m a dying man. I’ve only about a year to live.’

He was not certain what he expected, but he was certain it would be something which would wind up this business for good. He had longed to have one confidant, only one, and Blenkiron was safe enough. The sound of his voice speaking these grim words somehow chilled him, and he awaited dismally the conventional sympathy. After that Blenkiron would depart and he would see him no more. But Blenkiron did not behave conventionally. He flushed deeply and sprang to his feet, upsetting his chair.

“My God!” he cried. “If I ain’t the blightedest, God-darned blundering fool! I might have guessed by your looks you were a sick man, and now I’ve hurt you in the raw with my cursed egotistical worries. . . . I’m off, Sir Edward. Forget you ever saw me. God forgive me, for I won’t soon forgive myself.”


A theme running through the book is that of Leithen ‘making his soul.’ He accepts Blenkiron’s assignment determined to squeeze as much out of life as he could before he dies, makes his way to Canada and meets with Galliard’s wife, Felicity.

How valuable was that thing for which he was bartering all that remained to him of life? At first Blenkiron’s story had been no more than a peg on which to hang a private determination, an excuse, partly to himself and partly to the world, for a defiant finish to his career. The task fulfilled the conditions he wanted - activity for the mind and a final activity for the body. Francis Galliard was a disembodied ghost, a mere premise in an argument. But now - Felicity had taken shape as a human being. There was an extraordinary appeal in her mute gallantry, her silent, self-contained fortitude.

And so, Leithen’s spiritual quest to ‘make his soul’ begins with a trip to the north where he meets up with a ‘half-breed’ Cree tracker, Johnny Frizel and two Hare Indians. They discover that about ten days previously Galliard had joined up with Johnny’s brother, Lew, also an expert guide, and the two of them were heading north. Johnny suspected that Lew was as sick in heart as Galliard.

We have each of us to travel to his own Sick Heart River.

That turns out to be the case and now there were two men that needed to be found and healed.
The remainder of the story follows Leithen’s gradual convalescence and the turning point in his life where he chooses the path of duty and decides to stay in the North and help a tribe of Hare Indians who are on the verge of extinction. They had become unhinged by superstition and horror of the supernatural.

There was a plain task before him, to fight with Death...Here in the North life had always been on sufferance, it’s pale slender shoots fighting a hard battle against the Elder Ice. But it had maintained its brave defiance. And now one such pathetic slip was on the verge of distinction...
By God’s help that should not happen - the God who was the God of the living.
Through strange circuits he had come to that simple forthright duty for which he had always longed. In that duty he must make his soul.

Each sick-hearted man lost all care for himself in sympathy for others. When they forgot their own troubles, they found they had disappeared.

Well, that was a bit of a ramble. It’s difficult to summarize a story like this but it’s an excellent read. It’s quite different to most of Buchan’s other books and if you’re mostly interested in the Richard Hannay type of adventure, you may not enjoy this as much. My kids have read and re-read most of Buchan's books around the age of about thirteen or fourteen, but this one and Witch Wood are two that are best left for more mature readers, I think, but for different reasons.

Both books are available free for Kindle.


Linking up to 2018 Back to the Classics: Classic Travel or Journey Narrative
& Books You Loved


Labels: 50 Classics in 5 Years Back to the Classics 2018 Formation of Character Literature Mother Culture The Classics Club

Brian Joseph said…
It is interesting but not surprising that a writer such as Buchan world turn to writing something philosophical and thoughtful at the end. I have not read any of the authors books. I would likly want to read one of his earlier works first. As you describe them, the characters in this book sound very interesting.
24 August 2018 at 20:59

Ruthiella said…
I thought I would start with The 39 Steps. Buchan is one of those prolific authors of yesteryear that I want to investigate. Thanks for the Gutenburg tip! I didn't realize they were available there. I will go download posthaste.
25 August 2018 at 09:05

Carol said…
That’s true, Brian. Although many of his other book have plenty of adventure, they also have depth, not to mention skill in creating a tangible sense of place.
25 August 2018 at 19:07

Carol said…
Hi Ruthiella, that’s a good one to start with as it introduces Richard Hannay even though his subsequent books in the Hannay series are much more developed.
25 August 2018 at 19:10

DeliveringGrace said…
Thank you for this review. I have read some Buchan but not this one so have added the free version to my Kindle. Looking forward to reading!
26 August 2018 at 04:02

DeliveringGrace said…
I have just finished Sick Heart River. A truly interesting book and strange to realise that it finishes in April 1940-two months after Buchan's own death. I realised in Mr Standfast that Buchan liked to write contemporaneously but here he obviously, and very successfully, wrote about the near future.
11 September 2018 at 18:29

Carol said…
If you're interested, I think that website I linked has quite a few of his books. Witch Wood is another different type of book from his other espionage-type writing. It was a little weird & I still wonder what some of it meant but it's a good read too.
13 September 2018 at 13:39