A Combination of Mystery & History: The Daughter of Time by Josephine Tey (1951) 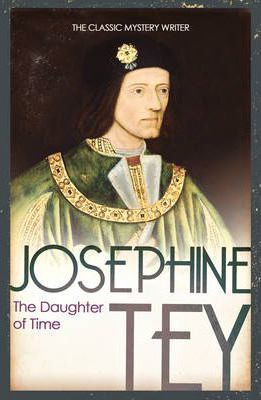 The Daughter of Time is an unusual type of crime mystery in that a piece of English history is resurrected and brought into the 20th Century to be investigated. It concerns the reign of Richard III and the murder of the Princes in the Tower.
Josephine Tey’s Inspector Alan Grant of Scotland Yard conducts his own investigations into the four hundred year old mystery from a hospital bed where he is confined after an accident while on duty. Bored and despondent, nothing has much interest for him until one day a friend, endeavouring to cheer him up, brings him a collection of historical portraits of people who had some mystery attached to them.
Grant had always had a passion for faces, made a conscious study of them, and had an almost instinctive way of picking out a criminal on sight.
When he finds a portrait of a man in his mid-thirties, dressed in the fashion of the late fifteenth Century, he is arrested by the expression in the subject’s eyes:

Grant paused in the act of turning the thing over, to consider the face a moment longer. A judge? A soldier? A prince? Someone used to great responsibility, and responsible in his authority. Someone too conscientious. A worrier; perhaps a perfectionist. A man at ease in a large design, but anxious over details...

When Grant turns the portrait over and discovers the subject is Richard III, he is piqued that he mistook a notorious murderer for a judge. His first impression of the man in the portrait was certainly not that of a villain. This arouses his curiosity and so he begins his own investigation into the allegations against Richard.
Each of the four books I’ve read by Josephine Tey have been quite different from each other, although Inspector Alan Grant features in all of them. The Daughter of Time is different from any other mystery/crime novel I’ve ever read and I enjoyed its uniqueness and its mental challenge.
Tey unearths contemporary accounts, documents, and historical resources to present Richard Plantagenet from a different viewpoint. She reveals that Sir Thomas More, the author of More’s History of Richard III, had never known Richard at all and had, in fact, only been eight years old when Richard died at Bosworth. More obtained his account of Richard III from John Morton who was the Archbishop of Canterbury during Henry VII’s reign and a bitter enemy of Richard.
Tey not only turns the Princes in the Towers mystery on its head but also has a little swipe at Cromwell:

Cromwell started that inverted snobbery from which we are all suffering today. ‘I’m a plain man, I am; no nonsense about me.' And no manners, grace or generosity, either...

And Mary Queen of Scots:

Her tragedy was that she was born a queen with the outlook of a suburban housewife...If you are willing to put a country of ten million people in pawn in order to score off a royal rival, then you end by being a friendless failure.

And she also has no time for the Scottish Covenanters:

The Covenanters were the exact equivalent of the I.R.A. in Ireland. A small irreconcilable minority, and as bloodthirsty a crowd as ever disgraced a Christian nation...A dragoon (read policeman) couldn’t arrest anyone without a warrant...but there was nothing to hinder a Covenanter lying snug in the heather and picking off dragoons at his leisure. Which they did, of course. And now there’s a whole literature about the poor ill-used saint in the heather with his pistol; the dragoon who died in the course of his duty is a Monster...Like Richard.

I read this book aloud to my thirteen year old daughter as it’s scheduled in Year 7 of the Ambleside Online curriculum and she really liked it, although it took a couple of chapters for her to get interested. As the AO website states, there are some sections that need editing for this age group, but they’re mostly in the first few chapters and they aren’t central to the story.

This book opened a wonderful door for the discussion of historical perspectives and bias and inspired Moozle to do a bit of reading on the Plantagenets and the Tudors. Then we started reading Shakespeare’s Richard III. Now, this was interesting after the perspective of The Daughter of Time! Shakespeare’s Richard III is a real creep. You only have to read the first two scenes of Act 1 before you believe Richard capable of every vile deed known to man.
Shakespeare’s Globe sheds some light on Shakespeare’s view of Richard. His portrait of Richard as a physical and moral monster is not accepted by modern historians.
The Daughter of Time is a splendid way to learn some history as well as being an enjoyable mystery.
Available free for Kindle

Updated to add this link: The Search for King Richard III (thanks to GretchenJoanna for passing this on!)

Linked to Books You Loved.


Labels: Ambleside Year 7 Back to the Classics 2018 Books for Teens History Reading to Teens Shakespeare

Aflyonmyhomeschoolwall said…
I read this one after the last Josephine Tey book you posted about. I so enjoyed it!! It made me pause and really think about historical biases and what we think is true versus what is actually true.
4 August 2018 at 21:44

Carol said…
Yes! It’s a great book to get you thinking about the way history can be told in a way that distorts the truth. Glad you enjoyed it, Anne!
4 August 2018 at 23:11

Mudpuddle said…
a terrific book and a great review! this was one of the best books i've ever read: there's just something about Ms. Tey; i really wish she'd written more...
5 August 2018 at 02:14

GretchenJoanna said…
This is the second blog post I've read about Richard this week! What meaneth it? Well, Tey's book sounds too fascinating to miss, so I ordered it. :-) It will teach me more about British history, but I would have to read constantly to tip the scales toward more retention of the subject. All that I have ever learned seems to be disappearing fast. But it's fun!

By the way, the other post was here: http://bitaboutbritain.com/search-for-king-richard-iii/

Brian Joseph said…
Super post. The book sounds very good too. I need to read a couple of well researched biographies on Richard III. It is so interesting that to this day, he drives so much controversy.
5 August 2018 at 14:42

Carol said…
Hi Mudpuddle, she's probably my favourite crime/mystery author, and, yes, it's a shame she didn't have the length of life that Agatha Christie was blessed with & had more time to devote to her work.
6 August 2018 at 20:59

Carol said…
Great link, thanks Gretchen! I've added it to my post. I've always had a head a bit like a sieve but it's definitely getting harder to retain anything unless I really make an effort.
6 August 2018 at 21:11

Carol said…
Hi Brian, yes, it is interesting considering how many other mysteries history contains. Maybe it's partly to do with him being immortalised by Shakespeare.
6 August 2018 at 21:17

Ruthiella said…
This title is still my favorite of Tey's books. I agree with your comment that they are all very different from one another (of those that I have read).

It also reminded me (just in its premise) of Rear Window the movie by Hitchcock where you have a bored, immobile man who needs an intellectual puzzle to entertain him and there's the plot.

I think it is great that the story inspired your daughter to do her own research into Tudor history.
8 August 2018 at 08:29

Carol said…
Ooh! That a unique basis for a movie. I suppose it’s a bit on the intense side coming from Hitchcock??
It’s so good to watch the development of ideas children glean from books.
8 August 2018 at 20:26

Michele Morin said…
Intrigued by this one, and glad to hear about Tey's writing. I love historical settings in England!
11 August 2018 at 19:52

Carol said…
Hi Michele, yes, English history goes back such a long way, unlike that of the USA, or Australia. We spent a lot of time figuring out who was descended from who as we were reading this.
12 August 2018 at 16:46

Sharon Wilfong said…
Josephine Tey is a recent discovery for me and I love all her mysteries. I have not read Daughter of Time yet (so I pretty much did not read your review). I have been saving it for last because I heard it is the best. Then I am going to read the biography I have of her.

Carol said…
Hi Sharon, I thought The Daughter of Time was quiite different to her other books - well, those that I’ve read so far - but her books are all very different. I love that some of her mysteries are based on actual events in history e.g. The Franchise Affair & D of T.
15 August 2018 at 10:12