Although the main purpose of our overseas trip was for me to return to Scotland, each of us had some specific ideas of what wanted to do and places we wanted to visit while we were in that part of the world. My son was keen to see his favourite football (soccer) team, Chelsea, playing in London and he ended up booking tickets to three different matches, one on Glasgow & two in London. We all went to the Glasgow Celtic game which was on while we were there and it was just how I remembered Scottish football - fanatical & noisy with plenty of police on duty!
The Chelsea game was on at the time we'd planned to be in Ambleside so we dropped him at the station in Carlisle so he could take the train to Stamford Bridge in London for the game and we continued on to the Lakes District.

Obviously, having an interest in Charlotte Mason's ideas and practice was one of my main reasons for wanting to visit the area, but I was also intrigued by a place that appeared to have been a mecca for some very influential, intelligent, and gifted people - Beatrix Potter, William Wordsworth and John Ruskin being notable examples besides Charlotte Mason.
In 1891 Charlotte Mason (1842-1923) started a training institute for governesses, which became the House of Education at Ambleside in 1892. After her death it became known as the Charlotte Mason College and was managed by the county until the 1990’s when it became part of Lancaster University. St. Martin’s College took over its management in the late 1990s (Charlotte Mason/St. Martins College in Ambleside).The site of the Charlotte Mason college in Ambleside is now occupied by the University of Cumbria which was formed in 2007.
In 2017 The University of Cumbria signed an agreement with the Armitt Library and Museum Centre, one of the UK’s rarest small museums. The Armitt is in the same location as the university (to the right of the sign pictured below) and first opened in 1912 as a museum, library and gallery 'devoted to preserving and sharing the cultural heritage of the Lake District.'
Founded in memory of sisters Mary Louisa and Sophia Armitt, Beatrix Potter was one of its early supporters and its greatest benefactor. It is now being established as the national centre for all Charlotte Mason archives. 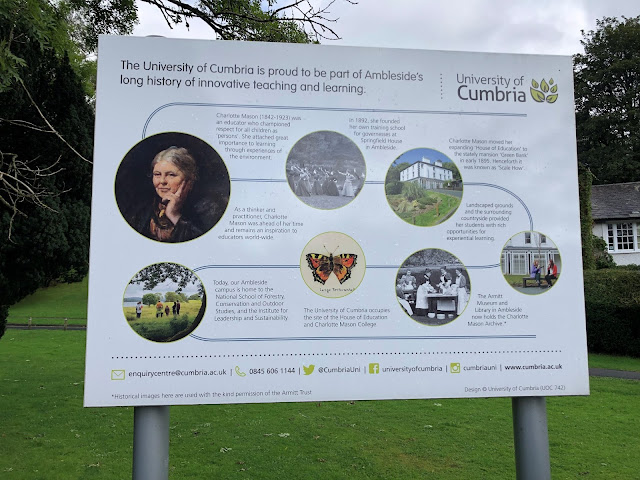 What was it about this little spot in England? Well, it was obvious as we drove down from the north that the Lakes District is very beautiful and the town of Ambleside itself is very quaint, but there are plenty of delightful little places all over Britain.
Although the second half of the 19th Century was a time of rapid innovation and technological advancement for Britain, Ambleside remained isolated from the general hubbub. It had no electricity until 1930, and it was some distance from the trainline so its comparative tranquillity made it a sought after retreat for intellectuals - artists, writers, and academics. They in turn had ties to numerous other poets, artists & novelists who also spent time in the area.
Surprisingly, there has also always been industry in the Lakes District with quarrying, a gunpowder factory, watermills, and copper mining. Up until the 1970's bobbin mills were operating there also.
We arrived at the end of the peak season and the centre of the town was a busy little place but it was peaceful & quiet in the Armitt. There are lovely little tea shops everywhere and there was a gentle intermittent drizzle of rain - perfect! 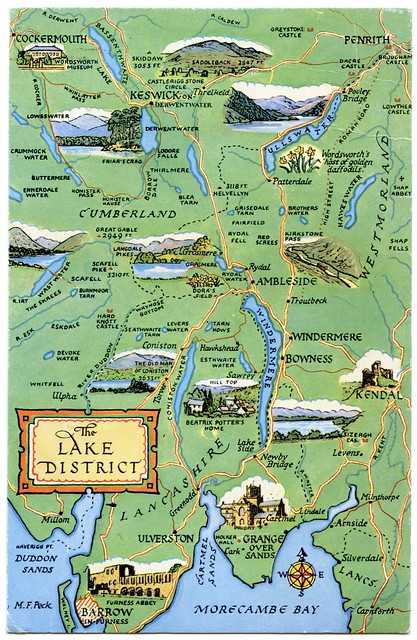 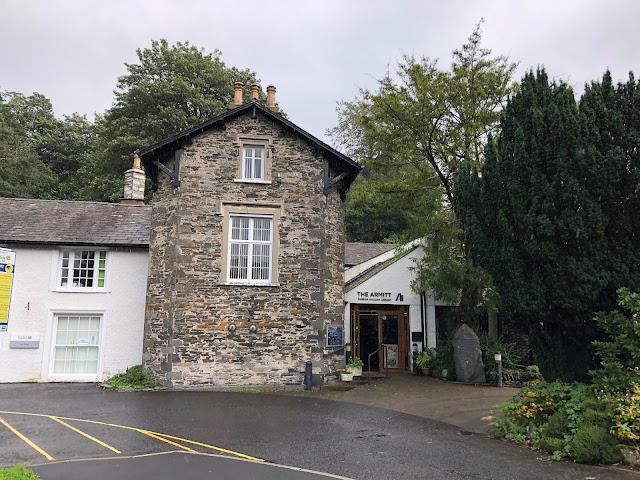 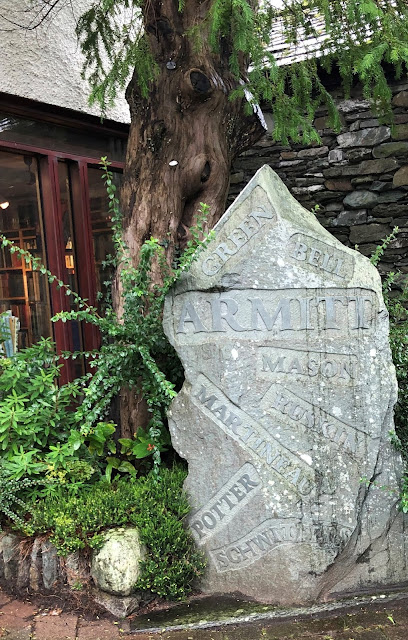 The Armitt building also hosts a gift shop and sells a wide variety of secondhand books that I thought were very reasonably priced. 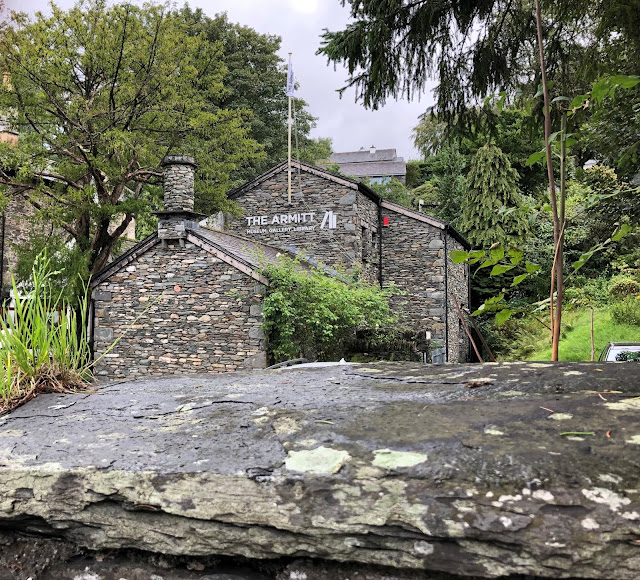 The Bridge House, said to have been built on an arch over the Stock (? Stream) Beck so the owner could avoid land tax, was built in the 17th Century: 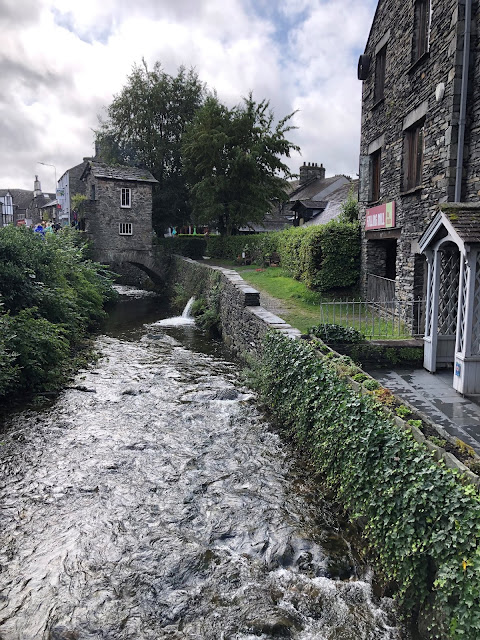 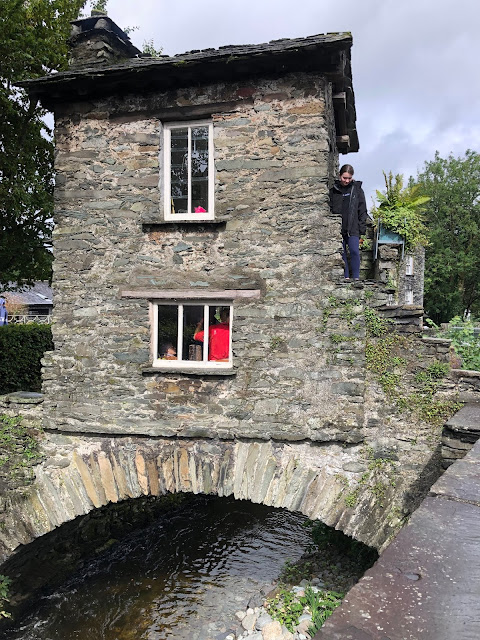 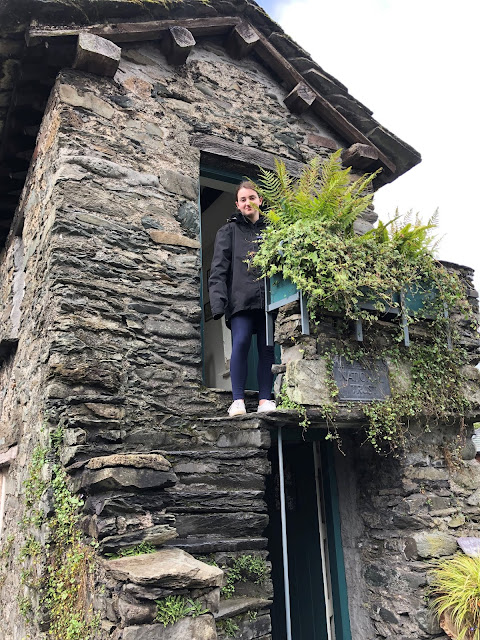 Although samples of Charlotte Mason's students' Nature Notebooks and other material may be viewed online via The Charlotte Mason Digital Collection at Redeemer College, I was so pleased to see and handle some original work at The Armitt. Photographs aren't permitted in the library but I was told I could photograph the samples I looked through so here are some of them. The library has a Charlotte Mason 'sample' box and I looked through this and also a couple of Nature Notebooks (pictured below). 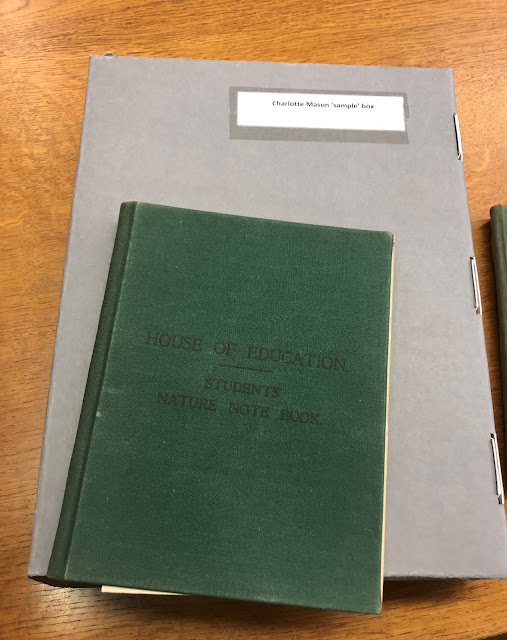 I was asked by a fellow home educator if the nature notebooks looked at all 'like the intensive sort of things we sometimes see in CM curriculum these days' and I would have to say that I thought they were quite simple and seemed to reflect the different personalities and inclinations of the owners. One I looked at was predominantly a journal with more text than actual brush drawing or sketching. Another concentrated more on drawing with less writing but observations were clearly labelled. 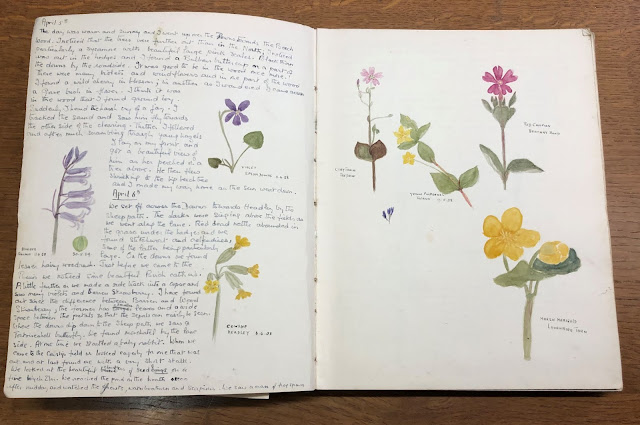 A close up view 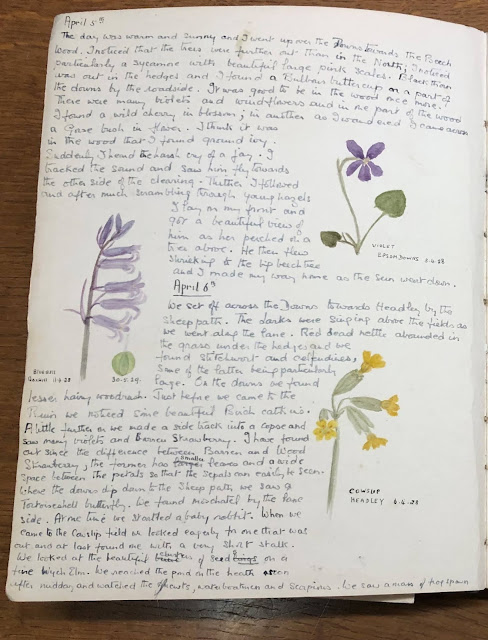 Frontispiece of a Nature Notebook 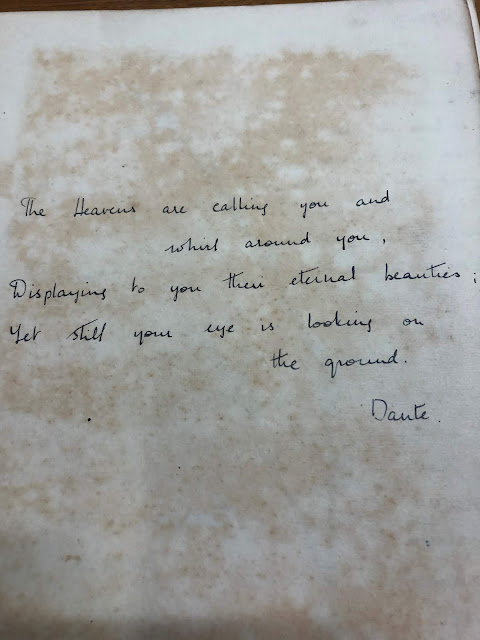 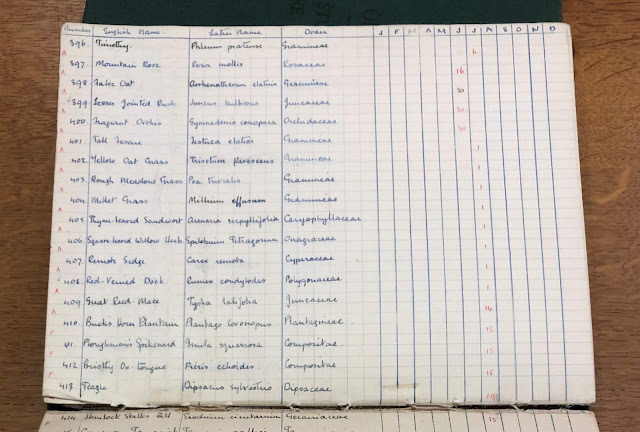 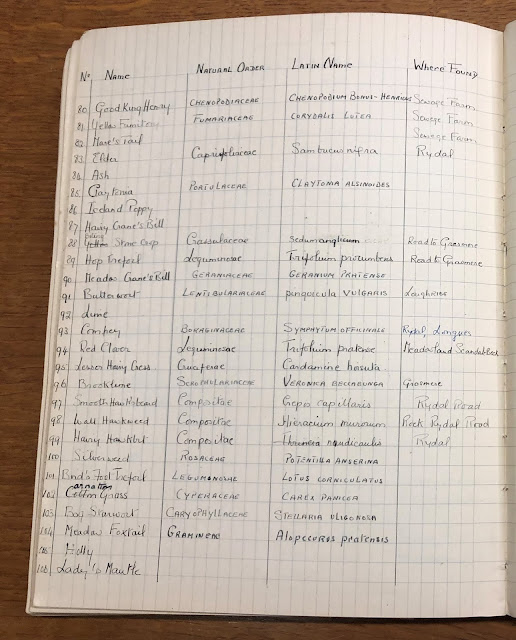 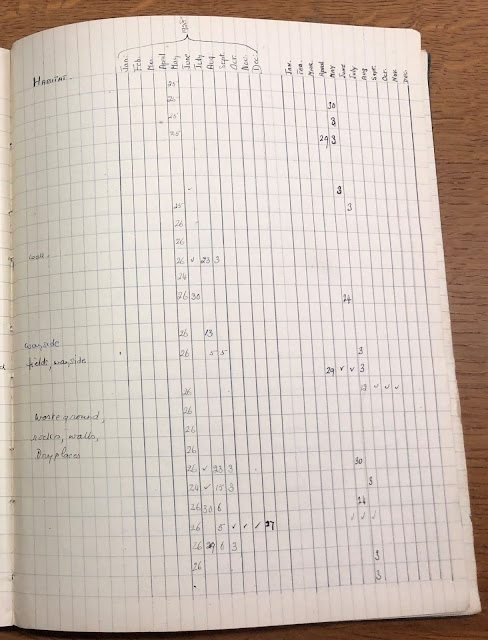 Moozle expressed her surprise that the notebooks weren't as artistic or professional as she thought they would be. Maybe that's because that's what she often sees when we look at nature notebooks online.
This was a positive aspect for me - seeing what the students of Charlotte Mason's schools actually did rather than 'making them the intensive things we sometimes see.' 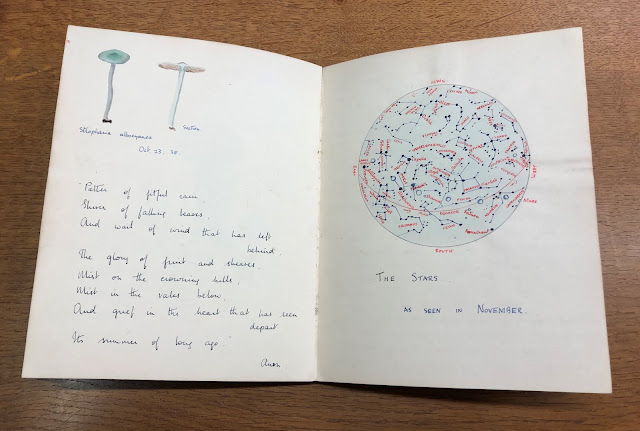 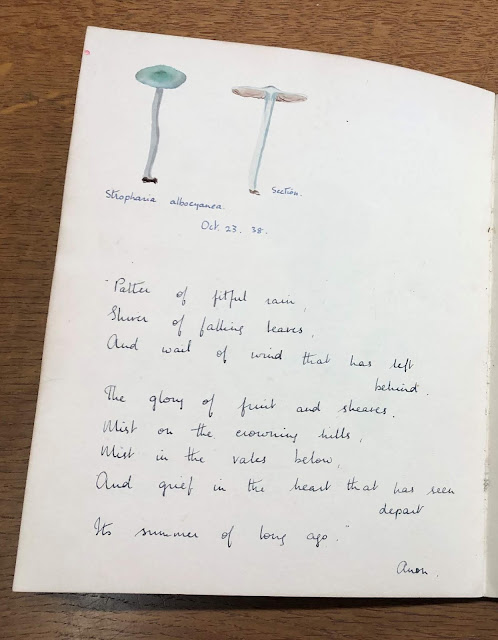 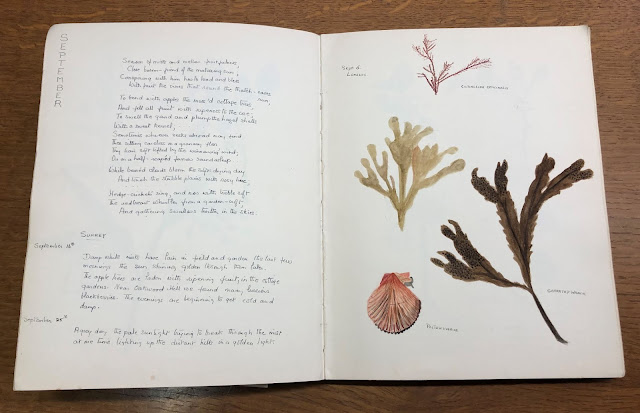 Poetry quotations were used as well as diagrams 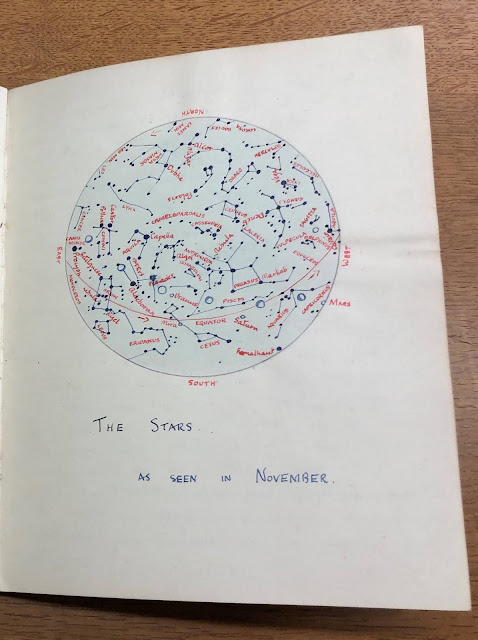 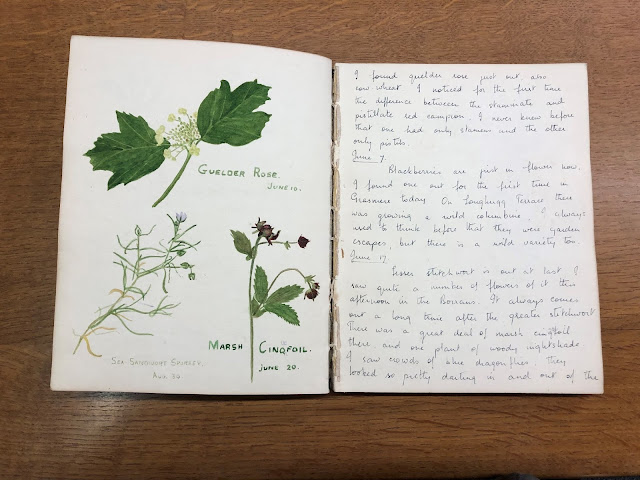 These look relaxed and do-able 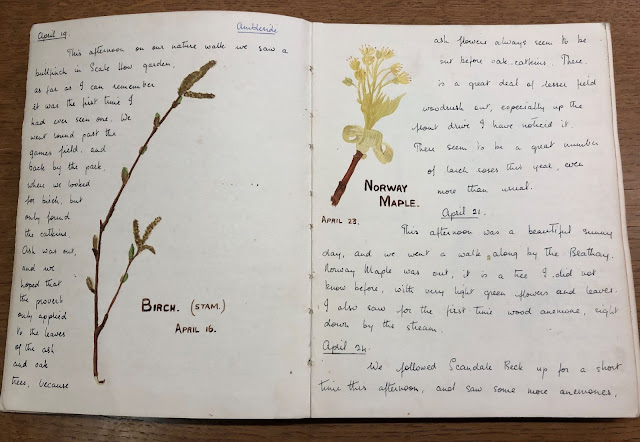 Amongst the items in the sample box was a  more recent PNEU programme for Years 9 & 10 which was just up my alley as Moozle is finishing year 9 this year. This schedule was included too: 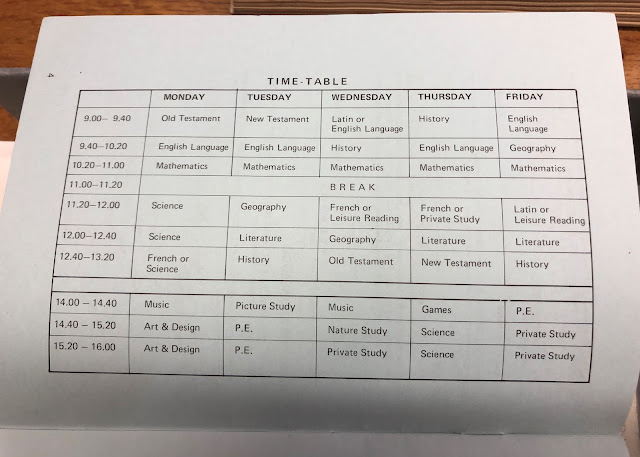 Free or Leisure Reading - this book list reflects a more British audience (except for the O'Dell book): 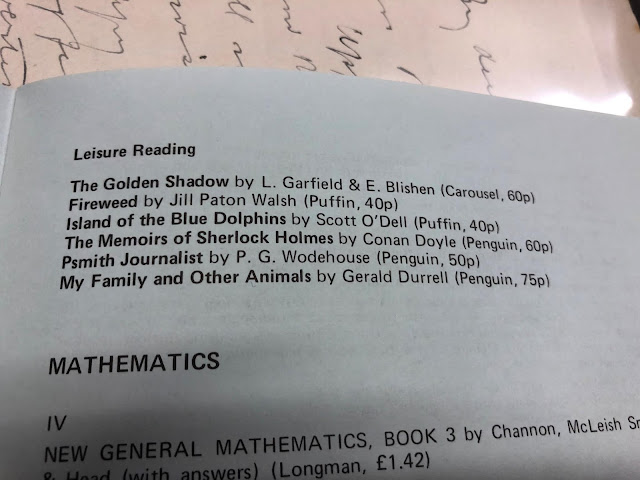 And so do the novels 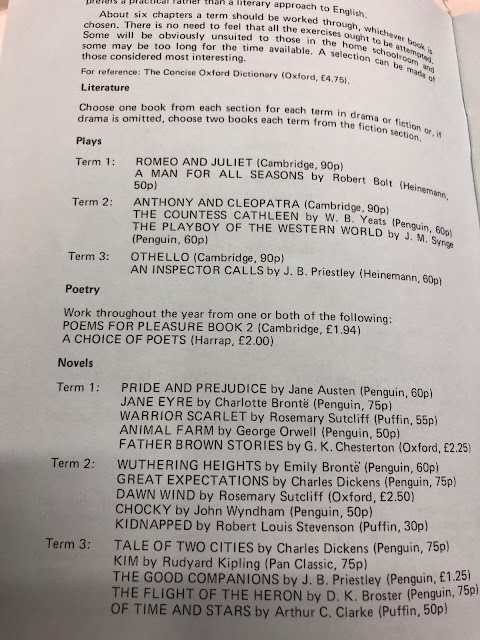 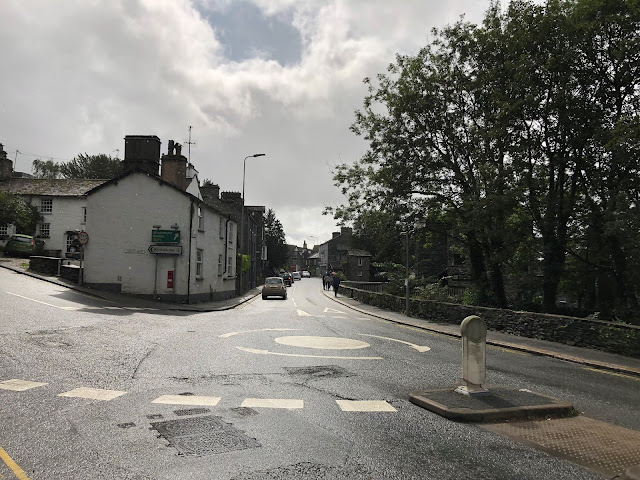 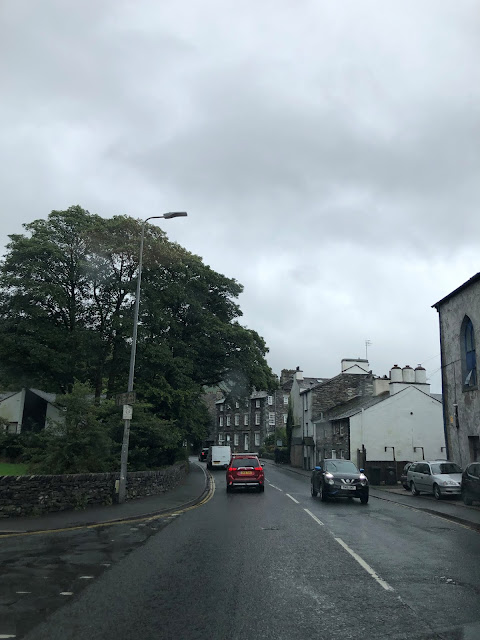 Some websites of interest:

Brian Joseph said…
Ambleside seems like a great place to visit. You found all kinds of interesting stuff. I also try to visit, for lack of a better word, intellectual destinations. Such visits really enhance a trip.
30 September 2019 at 01:14

mudpuddle said…
fascinating place and amazing diary entries; i'm envious of those who can draw flowers like that... Dove Cottage, Coleridge and Southey's heroic efforts to support his large family: memories pop up...
30 September 2019 at 02:00

Michelle Morrow said…
This is so informative. Thanks for giving us the sneak peak at the notebooks. I'm sure it is very encouraging for youndger students to see they were just ecercise books with notes. Planning to go there myself someday.
Smiles
Michelle
30 September 2019 at 08:02

Cleo @ Classical Carousel said…
Oooo, thanks for the look-in. It's interesting the schedule goes from 9 am to 4 pm. I thought it would be shorter.

Even though my daughter is not homeschooling anymore, I often feel like doing a year of Charlotte Mason education for myself!
30 September 2019 at 12:51

Marian H said…
Lovely photos... I hope to visit the Lakes District someday! There is so much to see in England, it could really take a month (or two, or three).
30 September 2019 at 16:28

Silvia said…
What a wonderful opportunity. Thanks for the beautiful post and pics. I too appreciate seeing real samples of nature journals.
1 October 2019 at 01:32

Carol said…
Hi Brian, when we were in London we stayed in Bloomsbury & everywhere we went there were lovely plaques outside places where 'so & so' lived - people such as Dickens & other writers mostly.
1 October 2019 at 19:55

Carol said…
Hi Mudpuddle, I read up about Southey - I knew who he was but didn't know of his association with Coleridge & that he lived in the Lakes District.
1 October 2019 at 19:57

Carol said…
Thanks, Michelle, there are so many interesting placed to visit that it's really difficult to choose. We crammed quite a lot in but I'd love to go back and see the places we missed.
1 October 2019 at 19:58

Carol said…
Hi Cleo, yes, although it's a high school timetable & back in CM's time the school week was over 6 days so if it's cut back to 5 days/week it will extend the hours.
The formal lessons are still scheduled mostly in the a.m.
You sort of are doing a CM education for yourself with all your reading. :)
1 October 2019 at 20:03

Carol said…
Marian, yes, that's the problem. A month wasn't long enough - I could easily have spent the whole time just in Scotland!
1 October 2019 at 20:04