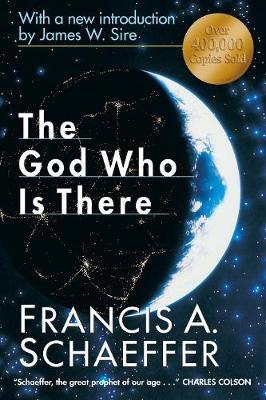 The God Who Is There by Francis Schaeffer was first published in 1968 and revised in 1982, two years before the author’s death.
Schaeffer was called ‘the great prophet of our age’ when he was still alive and now, 35 years after his death, his observations and wisdom are still relevant and no less valuable.
Francis Schaeffer’s strength lay in his ability to communicate ideas in both the spoken and the written word. He understood cultural trends and how they developed, and although he was an intellectual and a philosopher, he communicated clearly and compassionately. He had a strong pastoral approach which is evident even in the illustrations and general tone he used in this book.

'There is nothing more ugly than a Christian orthodoxy without understanding or without compassion.'

Ravi Zacharias, a well-known Christian apologist, said of him that, ‘Virtually every social, moral or philosophical struggle that we face today was either addressed or envisioned by him.’

Schaeffer believed that we need to understand the culture so that we can speak the truth of historic Christianity in our times and that the gap or chasm between the generations has come about because there’s been a change in the concept of truth. These ideas permeate all the books I’ve read by him.

‘Thirty or more years ago you could have said such things as “This is true” or “This is right,” and you would have been on everybody’s wave length. People may or may not have thought out their beliefs consistently, but everyone would have been talking to each other as though the idea of antithesis was correct. Thus in evangelism, in spiritual matters and in Christian education, you could have begun with the certainty that your audience understood you.’

I started reading Francis Schaeffer’s books when I was a fairly new Christian in my early twenties. Both he and his wife Edith, whose books focussed mostly on family relationships and practical areas of life, were very influential in my life. I was largely drawn to their writing because they both loved the arts and Francis, especially, explored the way that philosophy, art, music, literature and theology impacted and changed the culture.
One of his particular concerns was the use of language and communicating honestly. Modern intellectuals and those who inform and shape culture often use words for their connotations rather than their content in order to make ideas more acceptable. An idea may be presented in a palatable form using words that were originally associated with something quite different. He called this semantic mysticism and an example he gave were the words ‘transcendent’ and ‘god.’ Both these words previously suggested that personality was involved but when they began to be used in the context of ideas such as pantheism, they didn’t convey their original meanings. No personality is involved in pantheism (an example being Zen Buddhism).

Schaeffer uses terms such as antithesis, synthesis, presuppositions, and the ‘Mannishness of Man,’ and he defines these terms in particular ways. The glossary in the back of the book is an important adjunct to the book and also includes concepts that are uniquely his (e.g. ‘the line of despair.’) He uses illustrations from Albert Camus, Jean-Paul Sartre, B.F. Skinner, Francis Crick, and John Cage, but if he was alive today he’d be focusing on the authors, scientists, philosophers and the cultural influencers of our times. In the very first chapter of The God Who is There he used these words attributed to Martin Luther to underscore the importance of discerning the issues at stake:

‘If I profess with the loudest voice and clearest exposition every portion of the truth of God except precisely that little point which the world and the Devil are at the moment attacking, I am not confessing Christ, however boldly I may be professing Christ. Where the battle rages, there the loyalty of the soldier is proved, and to be steady on all the battle fields besides, is mere flight and disgrace if he flinches at that point.’

The God Who is There is a very thoughtful and important book that I read over the course of a few months for The 2019 Christian Greats Challenge: No. 4)  A Book on Apologetics.

‘In our modern forms of specialized education there is a tendency to lose the whole in the parts, and in this sense we can say that our generation produces few truly educated people. True education means thinking by associating across the various disciplines, and not just being highly qualified in one field, as a technician might be...’

This sounds like an interesting book. I am an atheist but I am interested in religious philosophy. It sounds like this might be a bit involved. The exploration about the nature of truth sounds like Schaffer is delving into the subjects that the postmodernists and critics of postmodernism go.

I like him, I have not read this one but it sounds like another excellent title.
I also like his clarity when writing about difficult concepts.

This sounds quite interesting. Thanks as always for the recommendation. :)

An excellent review, Carol! I've only read bits of Schaeffer but you've reminded me to make a concerted effort to read him and read him soon! I own a few of his books so I really have no excuse. I love how he approaches concepts intellectually which is much different than the quasi-feel-good-Christian books that tend to be popular today. Again, thanks for the review!

Hi Brian, it is a bit involved but he is skilled at getting his ideas across. He was the sort of person I think you would have enjoyed talking to. :)

Hi Silvia, me too. X

Thanks, Cleo. I like his intellectual approach, too. Lots of deep stuff but he gets his message across to the 'common man.'