On the Incarnation by Athanasius (c.296-373) - A Classic in Translation 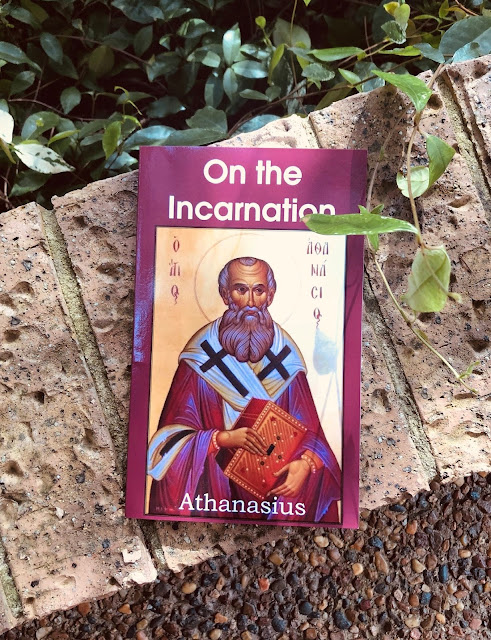 On the Incarnation was written over sixteen hundred years ago by Athanasius, a Patriarch and Saint of Alexander, Egypt. After Alexander the Great conquered Egypt in 332 BC, Greek became the most common written language due to its widespread use in government, education and literature and On the Incarnation was originally written in that language.

Bishop of Alexandria for forty-five years, Athanasius opposed Arius and his followers, who denied the divinity of Christ, in the most intense debate of the 4th century. He was banished for the position he took by both Constantine the Great and his successor.

‘Athanasius stood contra mundum ("against the world") in defense of the biblical doctrine of Christ. He opposed Arius when it seemed all the world would follow Arius's heresy. Athanasius's work remains even today the definitive statement of orthodox Trinitarianism.’

Athanasius was only about twenty-one years of age when he wrote this way back in the early 300’s AD. Maybe it was his youthful exuberance that lends a freshness to the book so that it feels as if it was written recently but it's also witty, logical, and in the words of C.S. Lewis, (who wrote the introduction to the 1946 English translation of the book that is a must read!) it is ‘a masterpiece.’

My edition of the book is only just over a hundred pages long but it is a challenging read so I’ve been reading short sections at a time over the course of this year. It’s an unusual and compelling book as the author wrote simply and lucidly while still maintaining a logical and thorough approach to his subject.

Athanasius starts off with a discussion of the origin of men, the Creation and the Fall because, ‘...it as our sorry case that caused the Word to come down, our transgression that called out His love for us, so that He made haste to help us and to appear among us.’
He then goes on to speak about the Divine Dilemma where man, who was created in God’s image, was in the process of destruction, and the rescue of mankind from corruption ‘was the proper part only of Him Who made them in the beginning.’

The Incarnation, the Resurrection, and Christ’s victory over death are discussed and then Athanasius deals with the unbelief and ridicule of the Jews and the Gentiles (non-Jews) respectively. He raises instances of signs and miracles documented in the Old Testament but points out that up until Christ there were certain things that had never occurred:

‘And the Jews who saw (the miracles) themselves testified to the fact that such things had never occurred before. “Since the world began,” they said, “it has never been heard of that anyone should open the eyes of a mam born blind. If this Man were not from God, He could do nothing.”’

He poses questions as if he were a lawyer speaking to a jury and then proceeds to provide answers showing the reasoning behind them. He asks why it is that the worship of the Greek gods such as Zeus and Chronos and Apollo has died out; why the wisdom of the Greeks no longer make any progress and that which used to be is disappearing, and why demons, ‘so far from continuing to impose on people by their deceits and oracle-givings and sorceries, are routed by the sign of the cross if they so much as try.’

He uses the example of a king who stays in his house and doesn’t let himself be seen. Some insubordinate fellows take advantage of this and proclaim themselves as kings, fooling the simple who, because they cannot enter the palace and see the real king, are led astray. However, when the real king emerges, the impostors are shown up for who they really are and those who had followed them now forsake them.
‘When the sun has come, darkness prevails no longer.’

The translator, who is not mentioned by name in the book, was Penelope Lawson. There are more details here.
A PDF of the book is here but it doesn't include Lewis's Introduction - you can read that here.


This book was my choice for the 2019 Christian Greats Challenge: 1)  A Book on Early Church History (up to about 500 A.D) or a book written by a key figure who lived during that time, or a biography about that person.
And:

Back to the Classics: A Classic in Translation

had never heard of Athanasius before. Your description of the work is fascinating.

I have run into a few books where the name of the translator is not mentioned. It is unfortunate when that happens. Translators are so important.

I agree, Brian! Translators are so important & can make or break a book. That's what happened with Sigrid Undset's Kristin Lavransdatter. The first English translation was severely flawed with omissions & archaic language but the book really took off when the Penguin Classics' Edition was published.
It's also very unfair for the translator not to be recognised for the work they put in.

I agree with you on the importance of a good translation.

Well, I consider you an expert that department, Sylvia!