A Chameleon, a Boy, and a Quest by J.A. Myhre 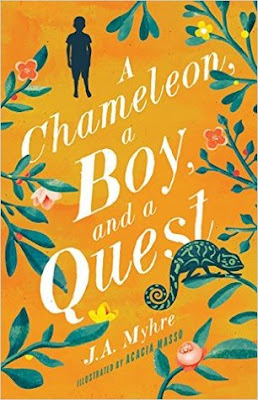 A Chameleon, a Boy, and a Quest is the story of Mu, a ten year old African boy, who has lived with his uncle after being orphaned as an infant. It is the tale of his search for identity, a search not of his own making, but one that was initiated by a very unlikely guide: a talking chameleon.
With echoes of C.S. Lewis’ Narnia books, a modern Pilgrim’s Progress, and Hinds Feet on High Places, Mu’s quest takes him on a journey into the unknown that is fraught with danger.

He encounters enemies in the form of his own insecurities and fears; men who know his true identity and want to keep that knowledge from him; a band of rebel soldiers who enlist him as a child soldier, and the shame that comes from his own act of betrayal.
'He had come to the moment of truth about himself, and the truth was not beautiful. But in the very act of committing the worst deed of his life, he also saw something deeper than that truth about his own soul. He saw forgiveness, forgiveness freely given when he least deserved it.'
A Chameleon, a Boy, and a Quest is a well-written book that has a very real sense of place. The author has captured the feel of Africa through the descriptions of the land and the characters. It’s a modern Africa that presents some of that country’s problems in an appropriate manner for children around about age ten and upwards.
The author handled the aspect of Mu's inner world very well. Mu didn’t know his true identity and measured his worth by the way he was treated. It would make an excellent family read aloud and I think it could generate some good discussions and help to address some of these issues that children sometimes struggle with.

'Again Mu thought of his cousins and home - though objectively he had not been treated as a son, it was the only home he had known. He had, over the years, come to believe that his state of affairs was the only one possible for him, that there was some inherent defect in his person that determined his lot as a servant, scapegoat, last in line, not-quite-member of the large household.'
This book is the first in the Rwendigo series of four books. My 14 year old daughter has read the first two books and enjoyed them so I think there’s a wide age range appeal especially for anyone who enjoys adventure with a bit of fantasy/allegory. The African setting is unique and adds another dimension to the story.
Many thanks to New Growth Press for providing me a free copy of this book for review.
#3 A Christian Allegory - see 2019 Christian Greats Challenge
at December 20, 2019
Email ThisBlogThis!Share to TwitterShare to FacebookShare to Pinterest
Labels: 2019 Christian Greats Challenge, Books, Books for Boys, Books for Teens, Children's Book Series

This sounds very interesting. The concept of an orphan trying to find themselves is an old one, but the stories seem to still fascinate. It is also a universal story that can be applicable anywhere on Earth

It looks interesting, and as Joseph says, the setting, in my eyes, makes it appealing.

This sounds like a great start to a new series for children that can also appeal to adults. Those are the best reads, the ones we can enjoy as children and then later with our children!

Brian - it is a universal story & I enjoyed reading it in a different context.

Hi Silvia, thanks for taking the time to comment, my friend. Hope you enjoy some good reading over Christmas!

Hi Ruthiella, that's so true! Have a great Christmas!

I have not heard of this book and it sounds great. Thanks for the review.

You’re welcome, Sharon. It’ a great book for kids.