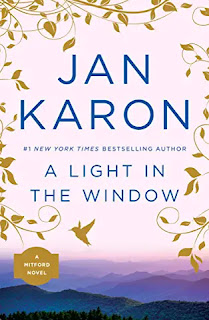 A Light in the Window is the second book in Jan Karon’s beloved Mitford series. At Home in Mitford introduced Father Tim, Mitford’s rector and lifelong bachelor, and this book continues developing the characters and relationships that were introduced in there.

Father Tim’s relationship with his delightful neighbour, Cynthia, is getting more serious but there are some complications that arise, one of them being a wealthy and manipulative widow who has her eyes on the poor rector and seeks to beguile him with her gourmet cooking. An Irish cousin turns up unexpectedly, plants her uninvited self firmly in place, and proceeds to behave very strangely. Then there is Father Tim’s own personal struggles as he wrestles with his future and contemplates the words of C.S.Lewis, “We are not necessarily doubting that God will do the best for us; we are wondering how painful the best will turn out to be.”

‘In all the years of his priesthood, he had pastored the need of others. Now, he found himself pastoring others to meet his own needs.’

‘He believed he had never married because he was married to his calling. The truth was, he had a complete lack of the equipment demanded for truly loving.’

There is much humour scattered through this book even as it deals with serious issues. I enjoyed reading about the interactions in a small country town, the way the author deals with the ordinariness of life, its ups and downs, its hopes and disappointments, and the daily living out of a life of faith.

An aspect of this book that I liked is that Cynthia sees past the exterior of a man who is a bit overweight and has recently been diagnosed with diabetes, to see someone who is worth getting to know. She bypasses Andrew Gregory, a suave, articulate man-about town and chooses the unlikely Father Tim instead. It takes a while for Father Tim to realise this!

‘Diabetes was the sorriest of infirmities to drag to a dinner party.’

‘What was he, after all, when you came down to it, but a country parson? Not tall and trim and debonair like Andrew Gregory, who owned a closetful of cashmere jackets, could speak Italian, French, and a bit of Russian, and drove a Mercedes the size of a German tank.’

I’m looking forward to slowly reading my way through this refreshing and gentle series of fourteen books.

As I get older I have come to appreciate slower moving plots. These give me time and measure to appreciate characters, writing, themes, etc Fourteen books is a lot. I wonder if the quality will hold up

I hope so, Brian. I know quite a few people who've read quite a lot further than me and they all speak well of them.

i've seen these books by Karon a lot over the years but have never really investigated any of them... i second Brian's comment about the changing tastes that come with age... i'll keep them in mind and when and if i get some time... a sensitive and informational post: tx...

I read Karon's series years ago and they were what I needed then. Just a cozy story to read while drinking hot tea and a blanket.

Actually, as I recall, I read them on a ranch in a stable as my son rode a horse around as a form of occupational therapy. But the cozy spirit was still there.

I'll have to try them again.

I will say I remember learning from Father Tim when he confronted his "Irish cousin". I was waiting for him to blast her out of his house with hot words, but he simply told her to go.

I absolutely love this series and have read them all. The quality of the writing holds up and Father Tim deals with all kinds of difficult and light hearted situations. The regulars in the series continue to grow as well. It is a great series I would like to re-read, which is saying a lot because I am not much of a re-reader.

Hi Sharon, I liked the everyday ordinary-ness of the story and the humour was tackled well.

Hi Gretchen, everyone I know who's read the series speaks highly of it. Good to know you do too. :)

It's been so long since I read Karon's series--I really need to revisit! They are so calm, so comforting. I also love the setting. I have an aunt that lives near the Blue Ridge Mountains, and we've driven through when visiting here--really a beautiful part of the country.

Oh goodness, I love this series. I just finished book 11 so I am getting close to the end, which is sad! I adore Father Tim. Such a kind, humble man who is always willing to help others. And the prayers and ways that Jan Karon speaks about God in the book is always so encouraging

Aren't they just lovely!? Sometimes the books that delve into the microcosm of everyday life speak to me the loudest.