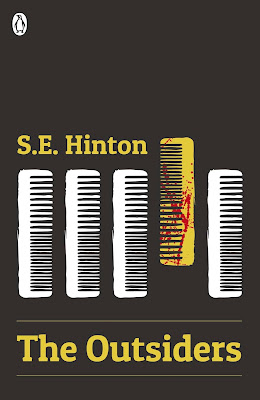 The Outsiders is a coming of age sort of story which works really well, probably because the author wrote the book when she was just seventeen years old. It is told very simply and directly from the viewpoint of Ponyboy, a fourteen year old ‘Greaser.’ The author captures the main character’s  personality and concerns so well and so naturally.

Ponyboy lives with his two older brothers, Darry and Sodapop. Their parents were killed in a car accident and twenty year old Darry has taken on the role of keeping the family together. He is bent on avoiding any situation that would give an opportunity for the authorities to send the younger boys off to boys’ homes. He has had to grow up fast and work hard and Ponyboy, not understanding his older brother’s situation, believes he doesn't care and sees everything he does as unnecessary interference in his life.

Something that really struck me about this book was the value placed on the role of parents. This isn’t something you’d normally encounter in a book dealing with the struggles of adolescence and it was quite refreshing.

‘Darry and Sodapop were my brothers and I loved both of them, even if Darry did scare me; but not even Soda could take Mom and Dad’s place.’

Johnny was the Greaser gang’s pet, everyone’s kid brother. His father was always beating him and his mother ignored him unless she was angry and then she just yelled.

He could stay out all night and nobody would notice. When Ponyboy complained about his older brother, Johnny said, ‘I ain’t got nobody,’

Ponyboy was startled out of his misery:

The Greasers were from the poorer side of town while their rival gang, the 'Socs,' were well-heeled and drove around in cars looking for Greasers to fight with. The two gangs were continually warring with each other but one night one of them was killed and everything changed for Ponyboy. Two gang members ended up on the run and suddenly it was no longer 'us' and 'them.' Ponyboy's former enemies are just like him - human.

The Outsiders is a quick but memorable read suitable for around the age of 15 yrs and up.

I first heard about the book when I hosted a ‘Mum Culture’ evening where a group of us discussed some of our most memorable reads. The gist of The Outsiders was mentioned, although the title had been forgotten and immediately someone else jumped in and said, “I loved that book!” and told everyone the title. So of course, I had to it check it out.

The ultimate test came when I gave it to my 15 year old daughter to read and she gave it her tick of approval also.

(I happened to notice that Ambleside Online has it as a free read in Year 11. I missed that in previous years so I don’t know if its been added lately or I just didn’t see it.)

When I was a teenager in the early 1980s lots of my peers read this book mostly because it was assigned and it was one that kids actually read. I happened not to have it assigned. I have never read it though I seem to hear about it a lot over the years. There is also a pretty famous film that I have not seen.

It does sound worth reading for both younger and older adults. The highlighted role of parents in a book like this does sound different.

i remember a lot of talk about this book at one time, but i managed to avoid reading it... and i'm a bit too long in the tooth now for it to appeal very much... nice, comprehensive review, tho...

I loved this book as a young teenager (maybe too young). But it never occurred to me to suggest it to my boys. My oldest son discovered it on his own around the age of 17 and really liked it.

Hi Brian, I was expecting it to be a British book for some reason (maybe the Greasers & Socs??) so was surprised to find it was set in the USA.

Hi Mudpuddle, I suppose there are some books that should be read at certain times in your life for maximum effect. I can't remember reading much at all in my early teens.

Hi Gretchen, I wasn't sure that my daughter would enjoy it but I'm pretty sure my sons would have liked it if I'd known about it when they were younger.

It's been forever since I read this book. We actually had to read its sequel That Was Then This Is Now in school. But I liked the Outsiders better. :)

I remember reading that book in school!

Hi lark, I haven't heard of that one!

Hi Erin, it must have been a trend at one stage. I can't remember reading any noels in high school.

‘Novels’ that was meant to be!

I read this as a teenager, too. Opened my eyes to a new way of writing.

Hi Nicola, my 20 yr old son just read it and really enjoyed it and liked the way it was written.