My husband read this book aloud to our older children years ago so it was my turn to read it to the two youngest, 8 and 13 years of age. The book was originally published in German in 1812-1813 and translated into English in 1814 and is the fictional account of the Robinson family: a father and mother and their four sons who are the only survivors of a shipwreck during a storm at sea. Left behind by the crew who abandoned the ship with all the lifeboats, the family were able to salvage a great many provisions and animals from the ship and find refuge on a nearby island where they encounter much adventure and survive many dramas. 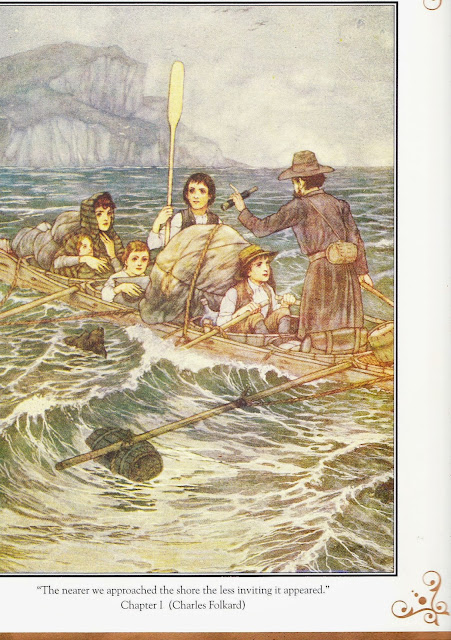 I remembered thinking the first time I heard the story that it was far fetched at times and we'd all tried to figure out where on earth the island might have been situated but later I discovered that the story was written by a Swiss pastor who wanted to instill certain values in his four sons and he used the incidents in the book to help to do this. There's probably no place on earth that would contain the array of animals and natural resources such as are found in the story, but it makes for an interesting tale!

I thought 8 year old Moozle might lose interest as the chapters were long and the book does tend to ramble at times with explanations of discoveries the family make and the in depth knowledge the father displays on everything they come across (we made good use of dictionary.com for definitions and pronunciations of these) but there was enough action and interest to keep her asking for more.

There is a godly tone throughout the book with numerous references to Providence, and the father often speaks to his sons about character issues and looks for opportunities to stretch his sons and instruct them in skills they would need to survive if they were left to their own devices.

In the evening, I desired my boys to let me see their dexterity in athletic exercises, such as running, leaping, wrestling, and climbing; telling them that they must keep up the practise of these things, so as to grow strong active men, powerful to repel and cope with danger, as well as agile and swift-footed to escape from it. No man can be really courageous and self-reliant without an inward consciousness of physical power and capability.


`I want to see my sons strong, both morally and physically,' said I; "that means, little Franz" (as the large blue eyes looked inquiringly up at me), "brave to do what is good and right, and to hate evil, and strong to work, hunt, and provide for themselves and others, and to fight if necessary."

Sometimes books with a moral tone can be devoid of natural humour and characters are set up as paragons of virtue but the Robinson family have their share of squabbles, small annoyances and human frailties and a good sprinkling of humour was found in their conversations with each other.

On coming upon a sleeping iguana which Jack had mistaken for a crocodile......

In another moment Fritz would have fired, but arresting his hand, "Your shot," I said, "would probably only wound the animal, and being extremely tenacious of life, it would certainly escape us; we must gain possession of the sleeping beauty by a gentler method."


"You are not going to kiss it, are you father?" asked Jack, with a grin.


I tried to rebuke him for his impertinence, but, failing, I commenced operations.

The Swiss Family Robinson is listed as a free read at Ambleside Online Year 6 and there are links there to find the book free online  I think it works well as a read aloud and if you have younger children who are are handling books such as the Parables of Nature or Robin Hood by Howard Pyle then they'd probably enjoy having this book read aloud to them if you wanted to include them with a child in Year 6.