These are mostly supplements to Ambleside's year 7 History - Scottish historical fiction and folksongs in the main. I've used them in the past before I knew of AO and recently with my 14 year old who started AO year 7 late last year. 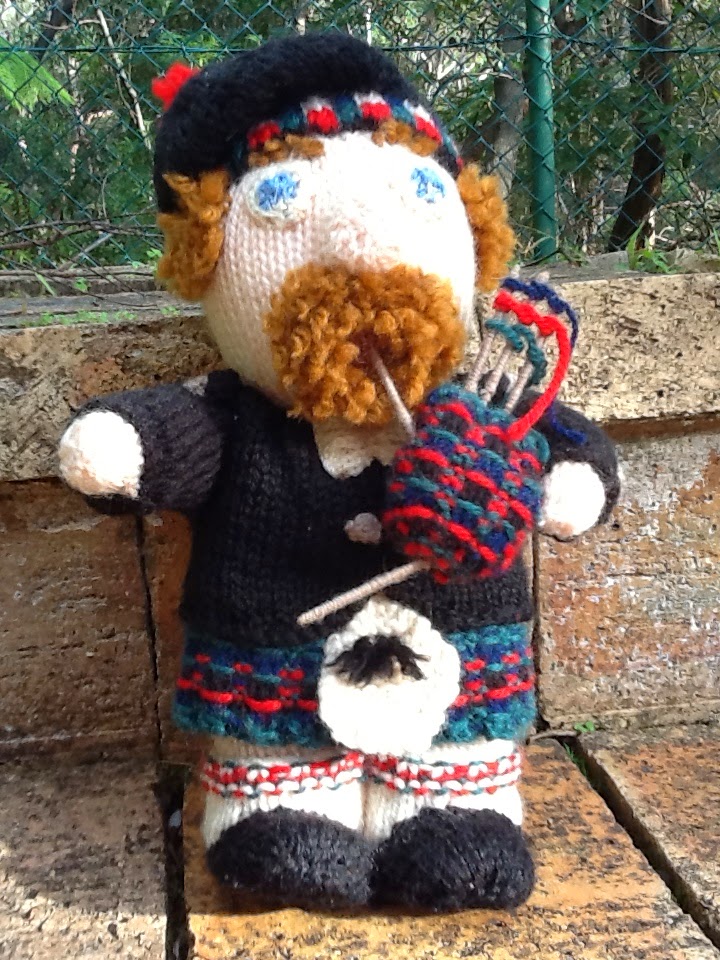 The Battle of Stirling Bridge, September 11th, 1297 in which William Wallace's greatly outnumbered Scottish army defeated the English forces commanded by John de Warenne. The words to the song, Stirling Brig, are here.

'Tell your commander that we are not here to make peace but to do battle, defend ourselves and liberate our kingdom. Let them come on, and we shall prove this in their very beards.' William Wallace


I finally worked out how to upload videos to you-tube so I could share one of our favourite folksongs from a CD bought in Scotland. Well, I had Natty & Bengy figure it out and I just added some commentary. Next time I'll have to be more adventurous and work out how to put in some visual content. Field of Bannockburn celebrates one of the most important battles fought for Scottish Independence, the Battle of Bannockburn, fought on the 24th June 1314, and this year marks its seven hundredth anniversary. The video commences with a short, stirring  narrative, around 40 seconds in length, and then the song starts.

Scotland's poet, Robbie Burns, wrote Scots Wha Hae, also known as 'Robert Bruce's March to Bannockburn,' in 1794. I like the version below but everyone else prefers the one performed by the Scottish group, Scocha.

Historical fiction for this time period in Scotland:

In Freedom's Cause by G.A. Henty is scheduled in AO for year 7 and is a lively account of the Scottish war of independence written by an Englishman. He handles it in a masterly fashion and is even-handed in his treatment of both the Scots and the English. My husband read this book aloud to us about 10 years ago and the kids have never forgotten it.

The Scottish Chiefs by Jane Porter was written in 1809 and the author was also English. I read this one aloud years ago in my best Scottish brogue. She overdid the character of Wallace by portraying him as totally unblemished, but being a true Scot I let it pass. Memories of the book include my struggle to say the word pusillanimity, which the author employed on a regular basis, and the predilection for just about every woman in the story to swoon and faint at one point or another, but it was exciting, heroic and epic enough for me to commit to reading all 504 pages! We have a lovely hardback copy of the book illustrated by the estimable N.C. Wyeth.
This is what Kate Douglas Wiggin had to say in the introduction of our Scribner Illustrated Classic:

If Miss Jane Porter sometimes exaggerated the the virtues of the noble Wallace, his achievements never fell upon incredulous ears in the days of youth, nor do they now, when I heartily believe that she is right in acclaiming him as "one of the most complete heroes that ever filled the page of history."
The author's portraits of Wallace, of Robert the Bruce, Edwin Ruthven and Andrew Murray are penned with a high enthusiasm that lifts the reader to her own altitudes. She bathes them in glory and we see them with her eyes; but though "Scottish Chiefs" is a panegyric, (lofty and elaborate praise) rather than a formal history, it has been accepted by critics as genuine in spirit, if not in absolute detail. 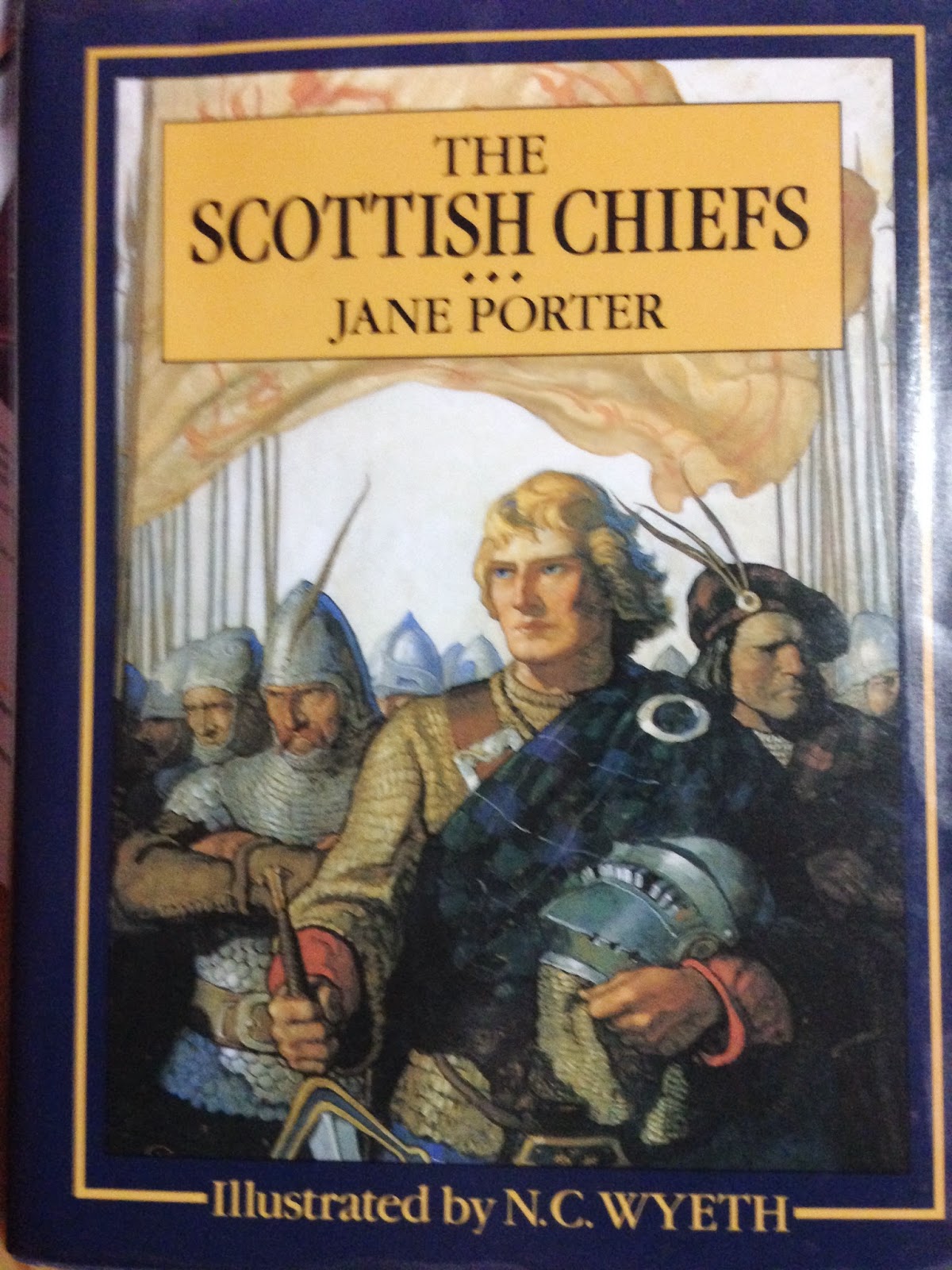 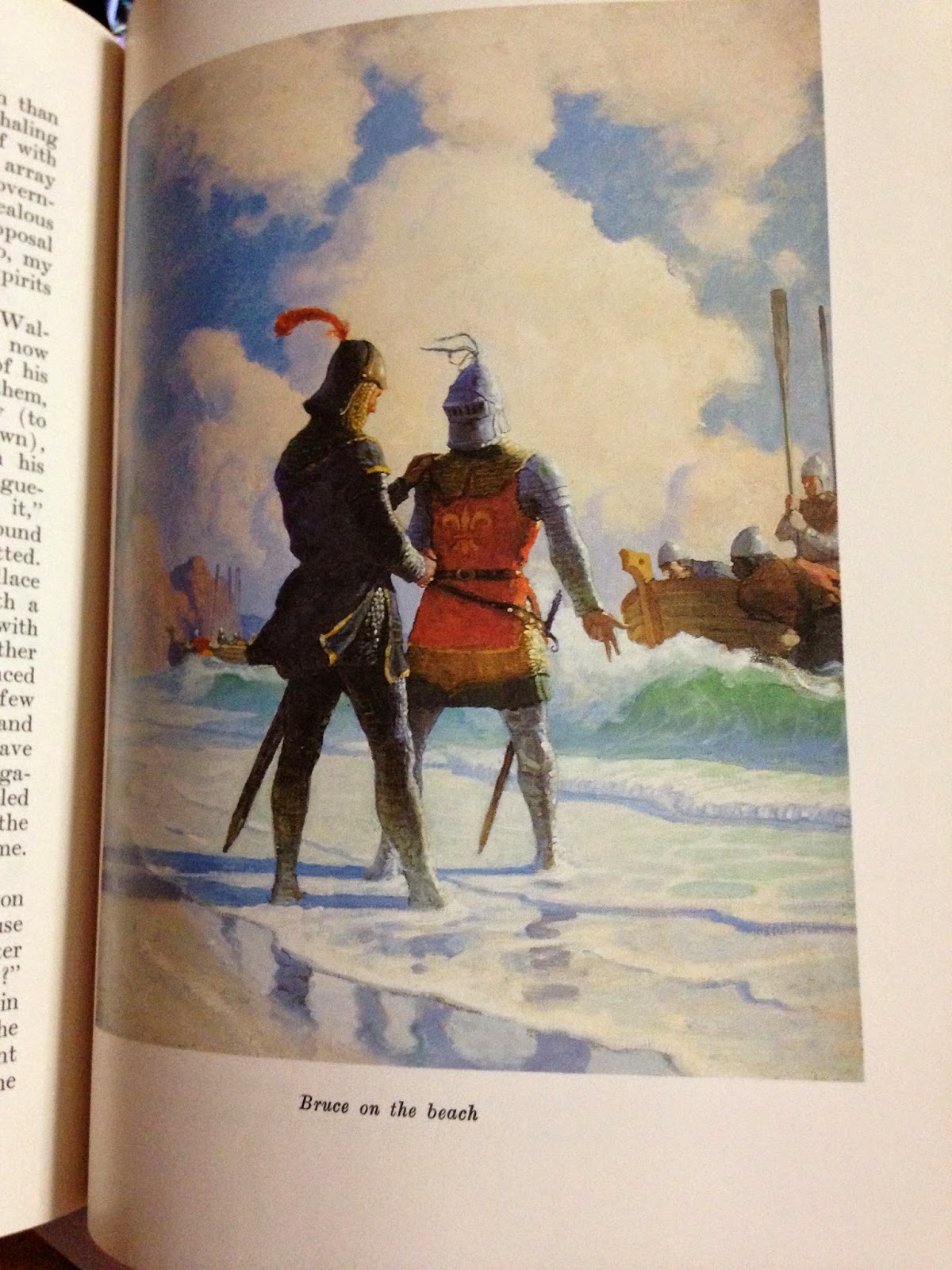 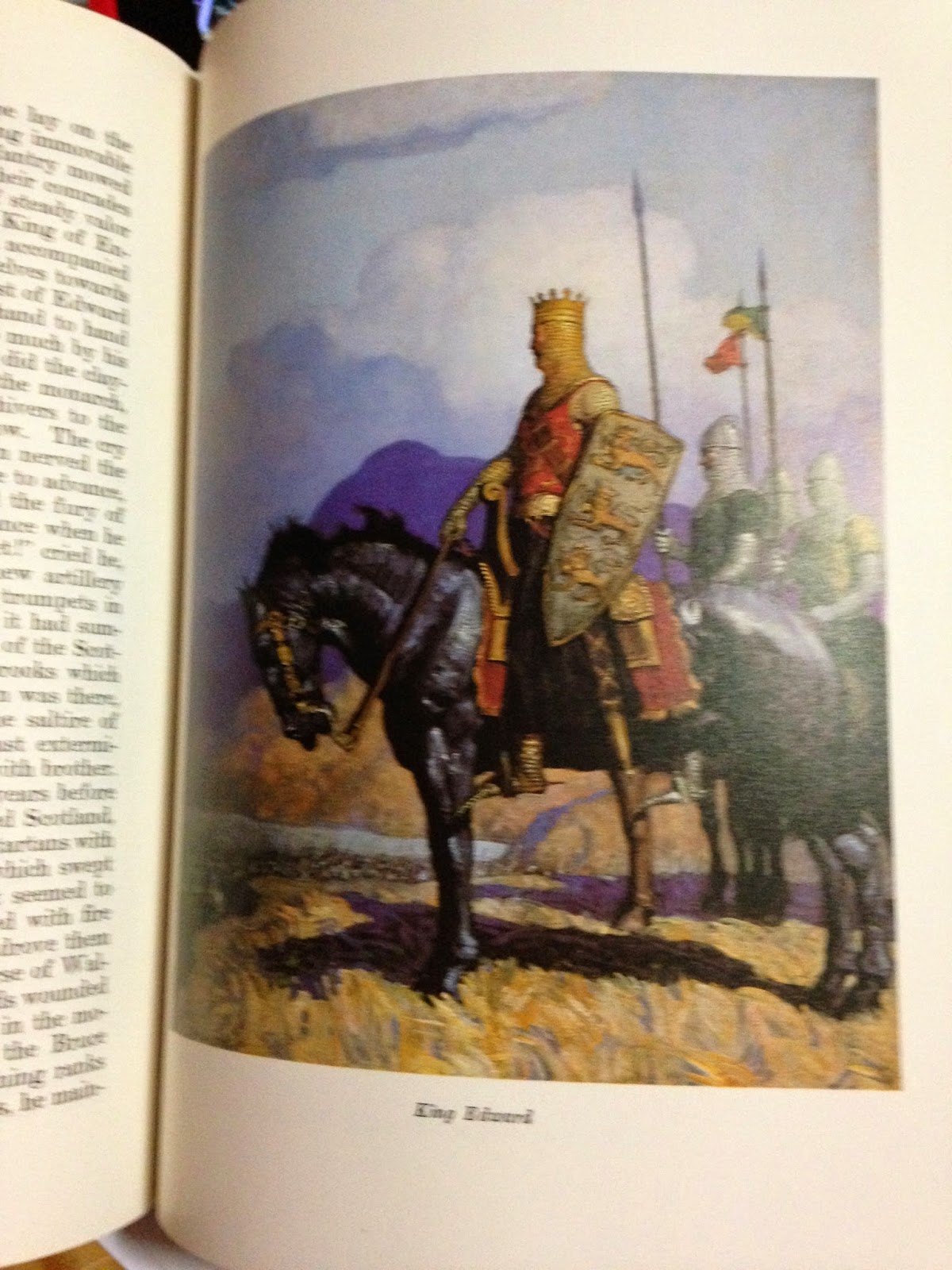 This is a poetic narration from Bengy (14 year old boy) on the memorable encounter on the first day of the Bannockburn battle.You can read a short account of it in H.E. Marshall's Scotland's Story. 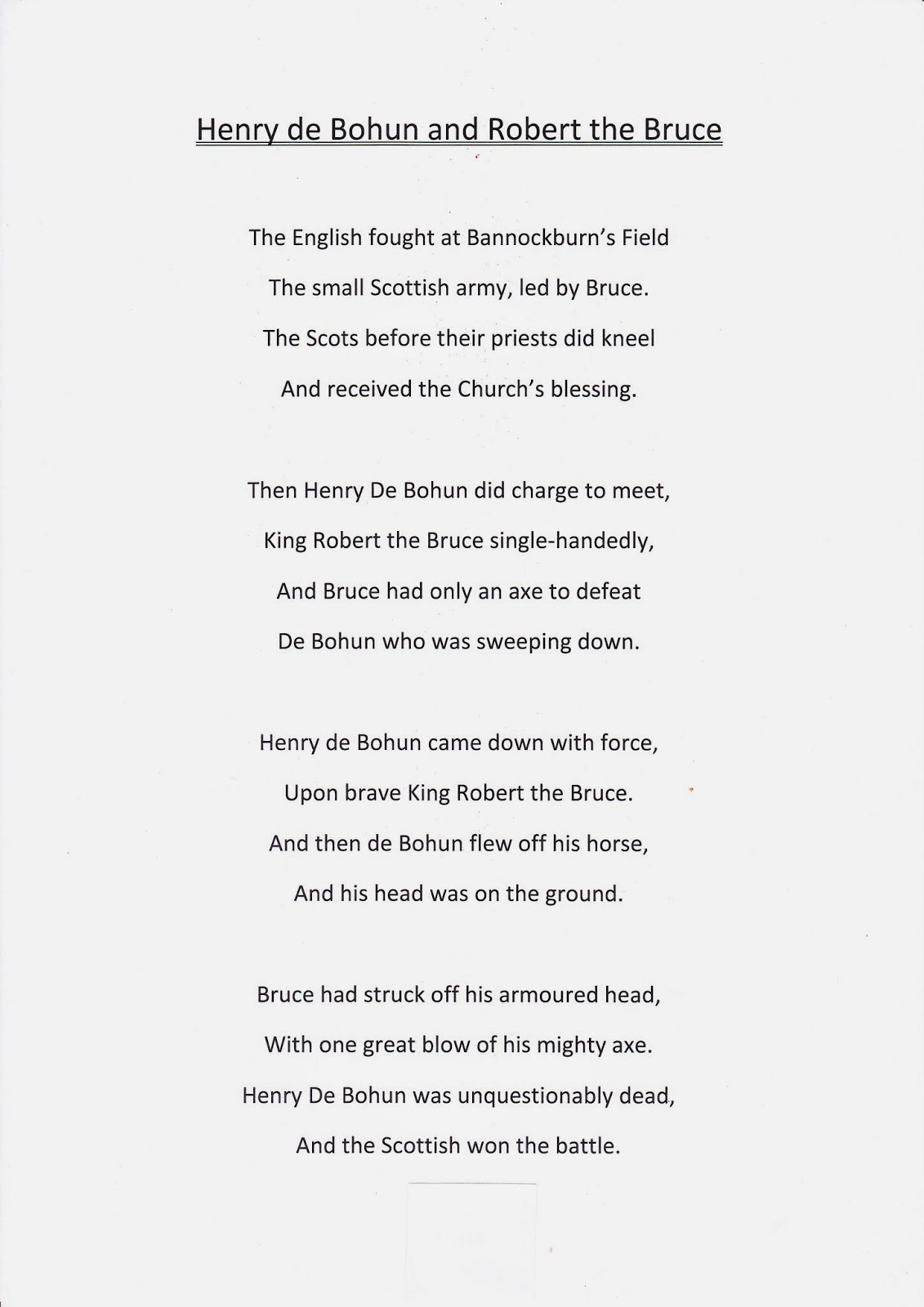 A more recent book on this time period is The King's Swift Rider by Mollie Hunter, a Scottish author who has written other books based on historical events in Scotland. I wrote about that book here.

From the Declaration of Arbroath, 1320:

'...as long as but a hundred of us remain alive, never will we on any conditions be brought under English rule. It is in truth not for glory, nor riches, nor honours that we are fighting, but for freedom — for that alone, which no honest man gives up but with life itself.' 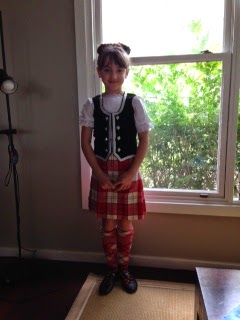 These supplements sound like a fun addition to our medieval studies for Year 2 of TOG. I'm pinning it! Thanks for the recommendations. :-)

I am going to have my son listen to the youtube selections as he is just starting In Freedom's Cause from Ambleside year 7 term 2. Very fun!!

It's a great time period to get absorbed in.

I am so excited to come across your blog by means of this very Scottish post - what a lot of fun and history. I think my children may have missed The Scottish Chiefs during their homeschooling - at least I know we never owned the book and I didn't read it, though my memory might be failing me about the kids. I'm glad I still have grandchildren (all with Scottish heritage) coming up in the ranks, and I will be sure to make a gift of the book, and to pass on your assemblage of resources to the parents who are continuing in the homeschooling tradition. Now I must go on and explore your blog archives....

My daughter gets to do Year 7 next year. Thanks for getting me excited about William Wallace and other people we will meet next year!!!

In five weeks we'll be in Scotland! We're gorging on all things Scottish as well. I love that version of Stirling Brig!