So far I've read over half of the Lord Peter Wimsey detective novels by Dorothy Sayers. I've enjoyed all of them but I have some favourites and Clouds of Witness has just been added to those. 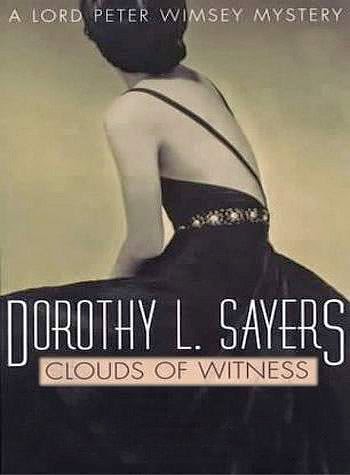 It was the shooting season and Gerald, the Duke of Denver, with a party of guests had been lodging in the village of Riddlesdale. In the absence of his wife, his sister Lady Mary, was acting as hostess. At three o'clock one morning the dead body of a man was found on the threshold. It was Lady Mary's fiance.

Lord Peter Wimsey had been in Corsica for three months refreshing himself after the exertions of a previous crime investigation (Whose Body?) and had just returned to Paris to spend a fortnight there when, to his surprise, he found Bunter his butler packing their belongings in order to return to England.
In answer to Lord Peter's consternation, Bunter produced a copy of The Times where Wimsey read the following:


'Dear me! Poor old Gerald arrested for murder. Uncommonly worryin' for him, poor chap. Always hated my bein' mixed up with police-courts. Now he's there himself. Lord Peter Wimsey in the witness box - very distressin' to feelin's of a brother. Duke of Denver in the dock - worse still. Dear me! Well, I suppose one must have breakfast.'


'Parker? That's good. Splendid old Parker! Wonder how he managed to get put onto it...'

Meanwhile, back at Riddlesdale, the Duchess had hastily returned to the lodge and an inquest had been held which found the deceased had quarrelled with the Duke of Denver the evening before his death. A pistol belonging to the Duke had been found near the crime scene and Lady Mary had collapsed after giving evidence and was understood to be very ill.

Wimsey arrived on the scene and together with Detective-Inspector Parker they commenced investigations only to find that the Duke refused to co-operate and appeared to have something to hide and Lady Mary had lied at the inquest and was using her illness to avoid being questioned further.
From complicated love interests, a shooting attempt on Wimsey's life, a night on the bleak Yorkshire moors which almost ended in tragedy, to court room antics and encounters with a ferocious farmer, Clouds of Witness is a great story. I enjoyed getting to know Wimsey's relatives in this story and his lame humour scattered throughout the book added to its pleasure.

The man spat again, pulled his hat over his forehead, and said briefly:


'Well,' said Peter; 'it's so uncommonly jolly finding' all you Yorkshire people so kind and hospitable, what? Never mind who you are, always a seat at the fireside and that kind of thing. Excuse me, but do you know you're leanin' on the gate so as I can't open it? I'm sure it's a pure oversight, only you mayn't realise that just where you're standin' you get the maximum leverage. What a jolly, charmin' house this is, isn't it? All so jolly stark and grim and all the rest if it...Who lives in it?'

A list of the Lord Peter Wimsey novels in the order of when they were originally released is here.

Sounds good! I had a class in Sayers in college but, except for one book, it's been ages since I've revisited her.

I'm sad to say I have yet to read one of her books, although I know her name. Looking right now at our library list to see what to request first.